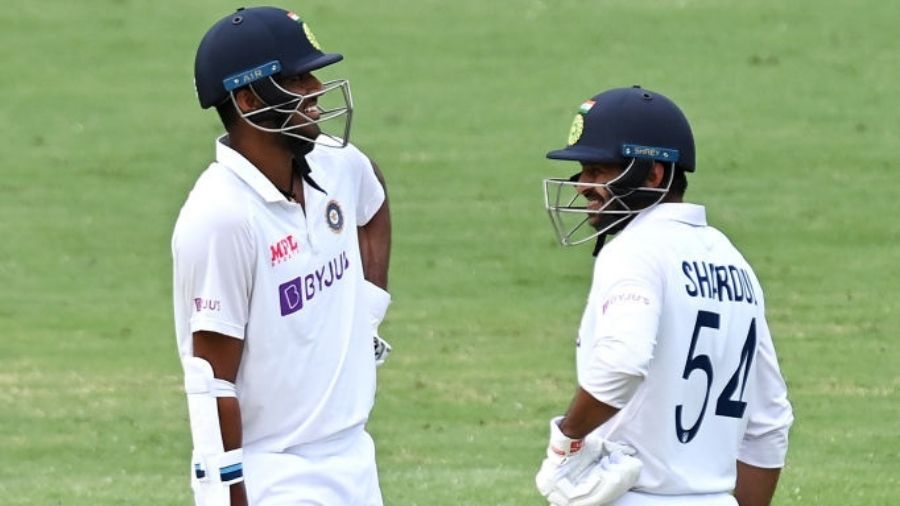 Debutant Washington Sundar and Shardul Thakur punched above their weight with splendid half-centuries to keep Australia at bay and India bullish after an engrossing third day’s play in the series-deciding fourth Test in Brisbane on Sunday.

Australia’s openers -- David Warner (20) and Marcus Harris (1) -- saw out six overs and extended the home team’s lead to 54 by stumps after India’s first innings ended at 336.

However, Australia’s lead could have been much more had it not been for a delightful 123-run partnership for the seventh wicket between Washington (62) and Shardul (67), who defied and then attacked the rival bowling attack with gusto.

Pacer Josh Hazlewood finished with a well-deserved 5/57 for Australia, a reward for consistently bowling with an impeccable line and length at a brisk pace.

Symbolising the courage shown by the visitors, now rendered almost second-string owing to a plethora of injures suffered by their top players through the four-match series, Washington and Shardul mixed caution with aggression to bail their team out of a precarious 186 for six.

First, they turned unlikely saviours after three soft dismissals pushed India on the back foot, and in the final session, the two opened up and went after the world-class Australian attack.

If his nine fours were not enough, Shardul bludgeoned off-spinner Nathan Lyon, holder of 397 wickets, for a maximum over long-on to reach his maiden Test fifty in style in only his second match.

Shardul opened his account with a hooked six off the world’s number one bowler, Pat Cummins.

Playing in his first Test, Washington too soon got to his maiden fifty in the traditional format while finding the fence seven times and clearing it once.

Earlier, Washington and Shardul did not let Australia run away with the game after Hazlewood sliced through India’s middle-order with the wickets of Mayank Agarwal (38) and Rishabh Pant (23) at the start of the second session.

At the tea break, India trailed Australia’s first-innings total of 369 by 116 runs at the Gabba.

This was largely due to the fight put up by Washington and Shardul who played their strokes without worrying about the result, frustrating the high-quality Australian attack with their carefree approach.

However, India were in a spot of bother before their counter-attacking act.

If the visitors lost the big wicket of skipper Ajinkya Rahane (37) to a poor shot at the stroke of lunch, they were dealt another blow right after the break when the persevering Hazlewood lured Agarwal into a loose drive for Steve Smith to complete a catch at second slip on the rebound.

More trouble was in store for India as Pant failed to get past Cameron Green, who pulled off a sharp reflex catch at gully after the batsman tried to work Hazlewood through that region.

At that stage, Australia were still ahead by 183 runs.

This was after Mitchell Starc induced a thick edge off Rahane for Matthew Wade to complete a comfortable catch in the slip cordon after the India captain had gotten away with similar shots twice in the first hour of play.

It was a shot that the seasoned Rahane could have avoided. Earlier, Cheteshwar Pujara (25) added 43 runs with Rahane before falling to a nearly unplayable delivery by Hazlewood in only his second over of the day.

Until Pujara’s dismissal, the experienced duo raised hopes of a big partnership by negotiating the formidable attack in the first one hour of play.

Pujara was his usual solid self while Rahane was a bit more adventurous and lucky as the ball flew past the gap between gully and third slip for boundaries on two occasions.

Before getting out, Pujara square-cut Starc for a boundary and also collected four runs with a back-foot square drive through deep point.

Introduced into the attack after 11 overs had been bowled in the day, Lyon saw Rahane rock back on to the back-foot and play the cut shot against the off-spinner for a four through point.

Bowling in the channel just outside the off-stump, Hazlewood got one to straighten a bit after angling it in. Pujara had no answer as the ball took an edge through to captain Tim Paine behind the stumps.

Returning to the side after sitting out the third Test, Agarwal showed intent as he looked to keep the scoreboard ticking in the company of his captain.

Batting at number five instead of the opening slot, Agarwal’s first boundary was a fortuitous one as a thick edge off Cummins flew between second slip and gully.

His second boundary was much better as Agarwal glanced Starc down the leg side.

More convincing was Agarwal’s six over long-on off Lyon but the best was the classic straight drive he played against Starc.