A review of Dhawan's thumb injury was not encouraging 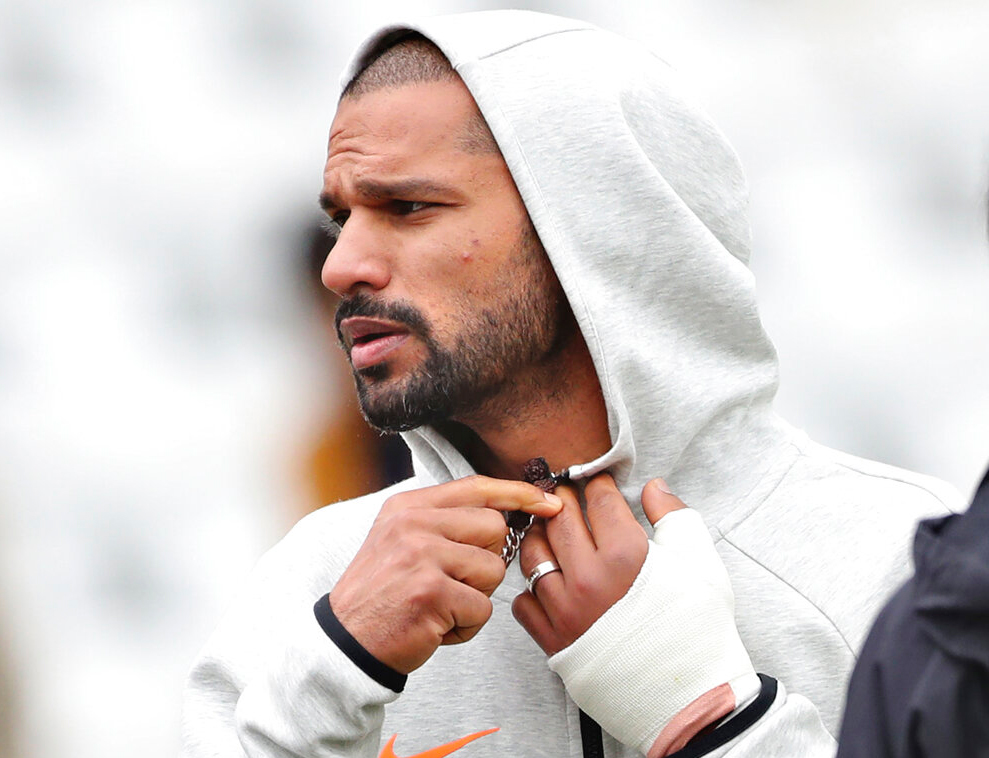 Shikhar Dhawan is seen with his left hand covered with a cast during team's training session ahead of their match against New Zealand at Trent Bridge in Nottingham, England, Wednesday, June 12, 2019.
(AP)
The Telegraph And PTI   |   Calcutta   |   Published 19.06.19, 03:53 PM

Indian opener Shikhar Dhawan was on Wednesday ruled out of the ICC Cricket World Cup after failing to make enough recovery in a fresh assessment of his thumb fracture.

Dhawan suffered the injury to his thumb after being hit by a Pat Cummins delivery during his 109-ball 117 knock against Australia on June 9. After he was ruled out, Dhawan posted on Twitter that it was an 'emotional' moment for him.

I feel emotional to announce that I will no longer be a part of #CWC19. Unfortunately, the thumb won’t recover on time. But the show must go on.. I'm grateful for all the love & support from my team mates, cricket lovers & our entire nation. Jai Hind!🙏 🇮🇳 pic.twitter.com/zx8Ihm3051

Dhawan was initially ruled out for three games — against Pakistan (June 16), Afghanistan (June 22) and the West Indies (June 27).

“The injury will not heal in time,” a BCCI source told PTI.

Pant was brought in as a cover for him after the team management decided to wait for Dhawan's recovery, but assessment of the injury this week did not throw up encouraging results.

Following several specialist opinions, he will remain in a cast until the middle of July and therefore will not be available for the remainder of #CWC19

Feel for Shikhar Dhawan. He was part of the process that made India such a strong side. He will miss the golden chance of being a world champion @SDhawan25

You never wish to make a World Cup team on the back of someone else's disappointment. But now that it has happened, let us wish #RishabhPant well. It is the opportunity of a lifetime and he has earned it.

Fracture rules @SDhawan25 out of the World Cup. You feel for him. He played brilliant and this is sheer luck. Wish him a speedy recovery.

Pant, 21, whose omission from the original squad had kicked up a storm given his exceptional form in the past one year, has got the big break.

His addition to the side was backed by the likes of Sunil Gavaskar. Gavaskar felt Pant deserved to be in if Dhawan was to be forced out owing to his “cracking hot form”.

Some on Twitter also thought up some Bollywood jokes to explain the possible state of Pant's mind.

#ShikharDhawan ruled out of the world cup due to a fractured thumb. #RishabPant pic.twitter.com/6Tiv93mNAP

#CWC19
**Rishabh Pant will be replacing #ShikharDhawan, who has been ruled out of the world cup**

#ShikharDhawan Ruled Out of World Cup. Rishabh Pant Replaces him.

Pant had scored impressive hundreds during the Test tours of England and Australia. He also enjoyed a good run in the IPL last month.