Advertisement
Home / Sports / I became relatable because I was able to be myself: Drew McIntyre

I became relatable because I was able to be myself: Drew McIntyre

The reigning WWE Champion opens up about being mentored by The Undertaker, his love for naan and more 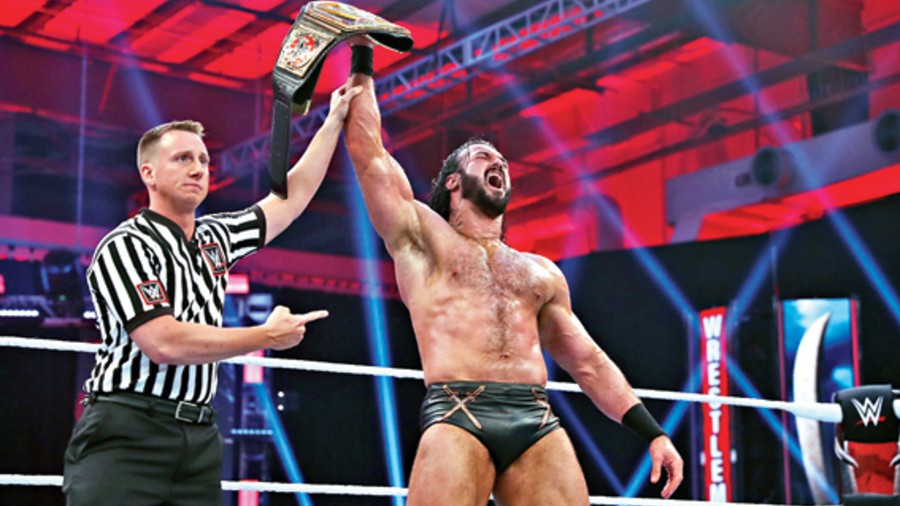 In an exclusive chat, reigning WWE Champion Drew McIntyre opens up about his transformation as a professional wrestler, what he learnt from The Undertaker, squaring off with Goldberg, his love for naan, and much more!

Growing up in Scotland, you played a lot of football and even considered taking it up professionally. So how did the transition to professional wrestling come about and who were your early inspirations?

In terms of inspirations, my favourite was always Bret “The Hitman” Hart. As far as football goes, where I’m from, everybody plays either football, rugby, or cricket. And football was what I was obsessed with, along with wrestling, but wrestling always felt like this far-off, American thing. I was in a football match once where a player ran into my shoulder and knocked himself unconscious. I got a red card, took off my shirt, and threw it at the referee, then tried to fight the referee, and the managers had to pull me off the pitch! That was the day I decided that I should take this physicality to wrestling. I stopped playing football and started focusing on wrestling one hundred per cent.

In your early years, The Undertaker was one of your main mentors. How did that experience shape you and what did you learn from interacting with such a legend?

I learnt tons from being around Taker. He has such an advanced wrestling IQ, that sometimes when he spoke to me, it was like a doctor speaking to someone in high school. But eventually, his lessons would kick in... The exact phrase he would use was “stop playing the wrestler, be the wrestler”. What he meant was while out there in the ring, relax, embrace the moment, and have fun. When you start having fun, the audience can feel it, and then they start having fun.

Your WWE career has seen two distinct phases. You came as “The Chosen One”, then left the company for a few years, wrestled around the world, and then returned to WWE with a fresh set of attributes. How do you view your evolution in WWE?

I am certainly an evolved version of myself. Physically, it seems I have eaten my previous version because I have grown so much bigger! But previously, character wise, there was something that wasn’t quite where it needed to be. But I realised that all I needed to do was relax. And that’s what I finally did. And then my real story started to come through, how I have had to keep fighting for my dreams and keep picking myself back up. I became the real Drew, and the real Drew is a bit silly, a bit sarcastic. I became relatable, because I was able to be myself.

2020 was a fantastic year for you, from winning the Royal Rumble to main eventing WrestleMania, to winning Superstar of the Year. But if you had to pick one moment that defined the last year for you, what would it be?

Just because of the gravity of the situation, it would have to be winning the WWE title. And not just because it was the first time I won that title or because I won it at the main event of WrestleMania (by beating Brock Lesnar). But also because of what was going on in the world at the time — the whole world had shut down, Covid was at its absolute peak, people had no live content to watch except WWE and WrestleMania, and I had that feel-good story right at the end of WrestleMania week, which put a lot of smiles on people’s faces. Hearing all the insanely positive feedback, millions of people being able to escape for a while through WrestleMania..., if I had to pick one moment from 2020, it would have to be WrestleMania.

Shifting gears to the present, how excited are you about facing Goldberg for the WWE Championship at the Royal Rumble (on January 31), given that he must have been someone you idolised as a child?

It’s crazy! I remember my brother and I would flip between WWE and WCW, waiting for Goldberg’s matches. Then when the video games came along, I would create myself in the Create-A-Wrestler mode and fight Goldberg. I always thought I would be WWE Champion, because that was my dream, but I never thought I would be WWE Champion fighting Goldberg. It is who I need to fight to take myself and my title reign to the next level. It’s going to be an absolute war, with McIntyre and Goldberg.

Going back to your childhood, is it true that you once wrote to the Federal Bureau of Investigation (FBI) and actually received a box full of documents from them?

As a kid, I was into conspiracy theories. I used to subscribe to a magazine called The X-Factor, which covered a wide range of strange topics — UFOs, paranormal activity, deadly bugs, and all that. And one particular issue had a sample letter, which you could send to the FBI and get whatever information you wanted under The Freedom of Information Act. I used it, and then one day, my dad was at home sitting with a dossier of papers, which were three to four inches thick! And my dad was like, ‘Drew, why is the FBI in America sending you these documents?’ I told him I had asked for them, to which he said: ‘Why don’t you go play football or do something normal!’

Let’s explore your India connection now. You have, of course, been great friends with Jinder Mahal, but you also have a great love for Indian food. So which are the Indian dishes you crave the most?

I like korma more than anything, especially Kashmiri korma. And I’m a big chicken pakora guy, and naan bread, for me, is the best kind of bread. If I had access to naan, I’d probably be 300 pounds, because I would eat so much of it. Sometimes, Jinder has his family members cook us Indian food, and it is awesome, there is nothing like home-made Indian food!

Finally, ahead of WWE Superstar Spectacle, which will be a one-of-a-kind India centric event, what is your message for all your fans in India?

India deserves something of their own from WWE. It’s such a large and insanely passionate fan base. Over the years, on Instagram in particular, where I can see the feedback of fans, the most positive comments are from my Indian fans. So, the first thing I want to say is thank you, you are the reason I am WWE Champion. I am not going to give a lot away (about Superstar Spectacle), but there’s going to be a lot of Indian representation, many stars you have seen, many you have not seen yet. I’m excited to get in there and mix it up with the Indian superstars. I’m very proud that WWE is doing this for India.

The dream match you still want to have: Facing The Undertaker at WrestleMania

The best piece of advice you have got in the industry: Be nice to everybody on the way up, it’s the same people on the way down