While not many would know Central Excise as a team of any consequence, the club tent is among the best to rush to for a solid breakfast 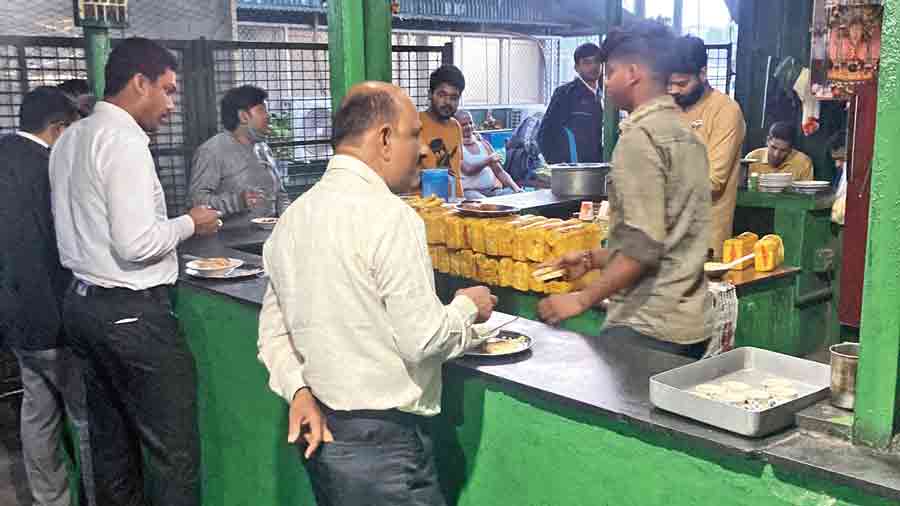 The twinkle is back in Munna Sharma’s eyes — the last two years have been difficult but the Maidan is finally starting to get its life back, and his regular customers are slowly returning to their old haunts.

“Now, you will get all the items. Please keep coming as you would two years ago,” Central Excise canteen’s owner Munna tells one of his regulars, Ashoke Majumdar. “I didn’t do good business in the last 24 months but I was unhappier because we didn’t get to see each other this long.” “Yes, I will come back in the afternoon, my son has asked me to get fish fries for him,” Majumdar replies and leaves.

Munna, aged 69, moves on to look after his other customers. Just then, a group of drivers from a popular five-star hotel in the city enter the canteen. The senior of the lot is heard saying: “I never eat rice when I come around here, only chicken stew and sliced bread for me.”

One finds all kinds of people at the Maidan. Few are sportspersons who come for their morning practice sessions and some simply come to watch the players practise, love of sport dragging them here. Once that’s over, there is usually only one destination - the canteens run by Munna and others like him.

The pull of scrumptious, yet pocket-friendly, fare at the numerous small canteens dotting the Maidan-scape draws everyone in. Every club worth its name boasts of its own canteen and specialities. In fact, some of the dishes are more famous than the on-field prowess of their patrons. The Central Excise canteen is the perfect example of that.

While not many would know Central Excise as a team of any consequence, the club tent is among the best to rush to for a hearty breakfast. Rush hour? 9.30am. If you’re late, be prepared to wait in queue but rest assured to sample the stock that never quite seems to run out. Crunchy toasts and mouth-tingling stews, crispy omelettes to boiled eggs, or simply a serving of rice and fish curry — you name it and, errr, you have it on a platter.

Opposite Central Excise is the Taltala Institute canteen, known for its ghugni and aloo-dum, that started doing brisk business from mid-February.

The Mukherjee family of Tarakeshwar also run three canteens: Mohun Bagan, the Kabaddi tent and the City Athletic Club. While the Bagan canteen is famous for their fish fry and chicken stew, the City canteen serves lunch to almost all the long-route passengers arriving at or leaving from Esplanade.

The Calcutta Referee’s Association canteen is equally famous for its extra-large dimer devil. The George Telegraph canteen, Khidderpore Club Canteen (try their delicious Mughlai paratha) are not much behind. But the identity of all these canteens took a beating in the times of Covid-19. Practice stopped at the Maidan, employees were let go of and a lot more.

The fight is nowhere close to finished but everyone believes the bruises of these past two years will fade one day and the love for the little big things will reign.

“We sent some of our employees home in the last two years. Business is slowly inching to better days now that cricket practice and the hockey league have started.

“But we are still earning a lot less profit than what we used to pre-pandemic,” said Palash Mukherjee, the owner of the Mohun Bagan canteen, who has been a fixture at the Maidan for more than four decades now.

“I have been here for more than three decades now,” Central Excise’s Munna, who also runs the Howrah Union canteen and the one near CAB’s gate No.14, said. “It’s time to pass the baton to my two sons. I am happy that the situation is getting normal.”