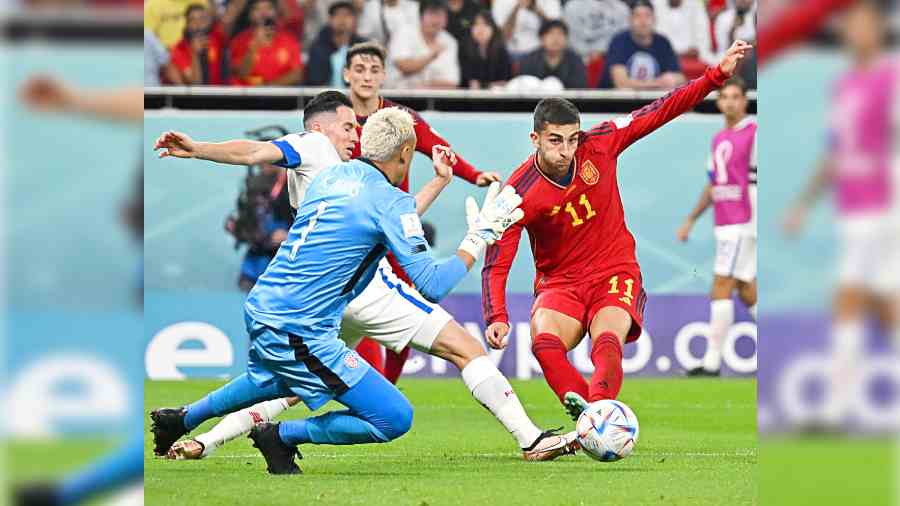 The joy of watching Spain. Uncluttered thinking, quick passing, run the opposition ragged and then go for the kill. Everything was on display at the Al Thumama Stadium on Wednesday. And at the receiving end were poor Costa Rica, who didn’t even manage a shot at the rival goal.

Three goals within the first 30 minutes — Dani Almo, Marco Asensio and Ferran Torres — ended the contest. In the second half four more were added. Torres got his brace before being substituted, then Gavi, Carlos Soler and Alvaro Morata scored the next three.

The final result was 7-0 in a match so one-sided — Spain had 76 per cent possession — that at times one thought if Costa Rica were at all on the pitch. Group E, billed as the Group of Death, now becomes interesting. With Germany losing earlier in the day, Spain and Japan now take the top two positions with three points each.

Luis Enrique had a newlook central defence in Rodri and Aymeric Laporte. That was quite expected since Eric Garcia and Pau Torres were not in that convincing form at their respective clubs. He also used Asensio as the No. 9 who normally plays on either side of the wing for Real Madrid. Spain started pushing back the Costa Ricans, who had a five-man defence, from the very beginning.

Busquets, Pedri, Gavi, Olmo and Jordi Alba played so many passes that within the first 10 minutes Costa Rica looked tired chasing the ball.

Pedri as always was a treat to watch playing passes and then utilising the free spaces. His Barcelona teammate Gavi was also at every ball. Every goal scored had the trademark Spanish stamp. The first one was about how coolly they can pass the ball around. Busquets to Alba to Gavi, who played to Olmo. The forward cut inside and chipped over an onrushing Keylor Navas. The second was similar. Breathtaking passes and then Alba played to Asensio whose low left-footer went past Navas.

The third was a matter of time and when an advancing Alba was brought down by a Costa Rican player inside the box, Ferran Torres did not make any mistake. Enrique started to substitute his first XI players but the players who came in just continued with the Costa Rican destruction.

Ferran Torres turned and volleyed home substitute Morata’s centre inside the box and Gavi came running and his low volley hit the base of the near post to enter the goal. Soler, coming in place of Asensio, rubbed more salt into the wound and Morata hammered the last nail in the Costa Rican coffin.

On a night of seven goals there was a record also. Gavi, 18 years and 110 days, became the youngest goal-scorer in Spain’s history at World Cups.

Michy Batshuayi scores at the stroke of half-time in Belgium’s 1-0 win over an unlucky Canada in their World Cup Group F game at the Ahmad bin Ali Stadium on Wednesday. Canada’s Alphonso Davies had missed an 11th-minute penalty after Yannick Carrasco handled the ball. Davies’ poor spot-kick was saved low to his right by goalkeeper Thibaut Courtois, with Canada wasting numerous other opportunities to open the scoring.