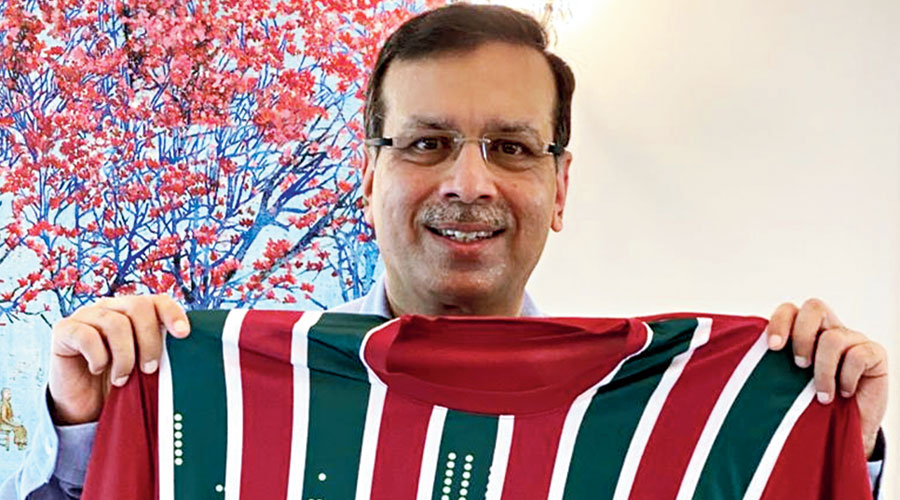 The iconic green and maroon colours of the 131-year-old Mohun Bagan club will be retained in its new avatar — ATK Mohun Bagan. The decision was taken at the new entity’s first board meeting on Friday.

That the colours will not be done away with was reported in Thursday’s editions of The Telegraph.

The “new” team will henceforth be called ATK Mohun Bagan Football Club and the name of the three-time ISL champions has been embossed on the logo — the ever-present boatman with green and maroon sails. By not tampering with the century-old club’s logo and yet incorporating ATK as a prefix to Mohun Bagan, the board, in a way, has tried to tell millions of fans that they don’t intend to play with tradition.

It’s not the first time though that Mohun Bagan would have a prefix before its name. From 1998 till the first six months of the 2014-15 season, it was McDowell Mohun Bagan on top of the logo. Likewise, arch-rivals East Bengal have had Kingfisher and Quess on the logo at different points in time.

ATK and Mohun Bagan joined hands in January this year with the ISL franchise acquiring 80 per cent stake in the new entity.

“Green and maroon are my colours now. I was present during the last Derby between Mohun Bagan and East Bengal and was overwhelmed by the love and respect Mohun Bagan fans showered on me that evening. I will give my best to live up to the expectations of the millions of Mohun Bagan fans,” Sanjiv Goenka, RP-SG group chairman and principal owner of ATK Mohun Bagan, told The Telegraph after the directors’ meeting.

Co-owners Sourav Ganguly and Utsav Parekh, directors Srinjoy Bose, Debashis Dutta, Gautam Ray and Sanjeev Mehra also attended the meeting. Sourav, the Board of Control for Cricket in India president, will also be the mentor of ATK Mohun Bagan.

“It’s a historic decision. The green and maroon colours are a tradition of the club. That is staying and also the boatman remains. What else do you want? All the board members are from this city and they are well aware of the sentiments attached with the iconic colours of Mohun Bagan. I am thankful that the board respected that. To keep the game alive, Indian football will need more such partnerships. Without corporate funding, you cannot survive,” Bose, one of the two directors from Mohun Bagan, said.

ATK are the reigning ISL champions, while Mohun Bagan won the I-League this season.

Regarding team building, Goenka said it’s shaping up well. “I cannot disclose much on that. But it’s looking good at this point in time.”

Bose said he and Dutta have been part of the team building process of ATK Mohun Bagan during the last three months.

“It’s a set team. Just some reinforcements are needed. Like last year, when Debashis and I built the team for Mohun Bagan, it was in consultation with Kibu Vicuna. Here also, Antonio Lopez Habas’s views are of paramount importance.”

Nita Ambani, founder and chairperson, Football Sports Development Limited (FSDL), also welcomed Mohun Bagan into the ISL. “We are delighted on the merger of ATK and Mohun Bagan,” she said through a media release.

Sourav too, through a media release, welcomed the move: “I salute the coming together of ATK and Mohun Bagan. Together, the brand name ATK Mohun Bagan will create history.”