Sportswear maker Hummel has 'toned down' the Danish team's jersey for the World Cup, introducing a black kit in protest 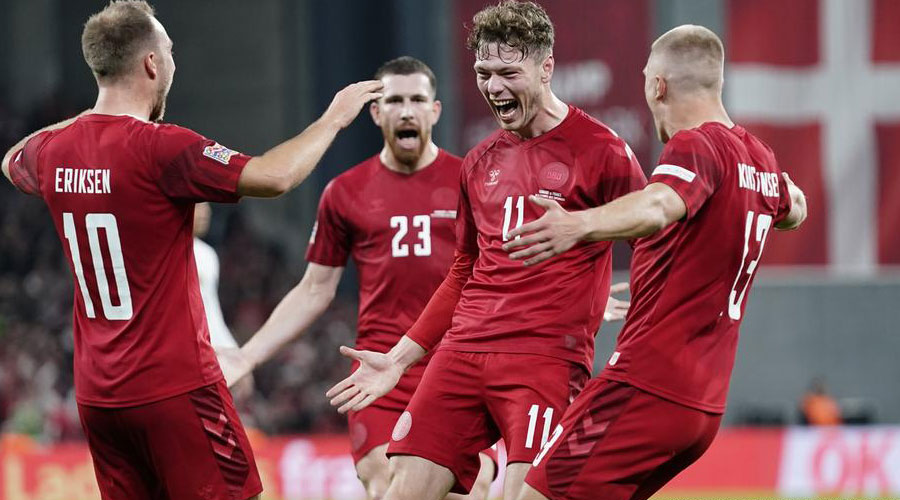 Denmark's kit supplier said the country's third jerseys would be black as a mark of protest in Qatar
Deutsche Welle
Deutsche Welle   |   Published 29.09.22, 11:34 AM

The Danish national football team will wear a "toned down" kit at this year's World Cup in protest at Qatar's human rights record, sportswear company Hummel said on Wednesday.

Its announcement elicited a furious response from the Gulf state.

Hummel posted two images on social media, firstly of a muted jersey in Denmark's traditional red, with the logo of the company and of the Danish federation barely visible. Distinctive features like the kit maker's famous chevrons were also toned down.

But the company also said it had introduced a black third jersey for Denmark, calling it "the color of mourning."

"While we support the Danish national team all the way, this shouldn't be confused with support for a tournament that has cost thousands of people their lives," Hummel wrote. "We wish to make a statement about Qatar's human rights record and its treatment of the migrant workers that have built the country's World Cup stadiums."

"We dispute Hummel's claim that this tournament has cost thousands of people their lives," the committee said. "Furthermore, we wholeheartedly reject the trivializing [of] our genuine commitment to protect the health and safety of the 30,000 workers who built FIFA World Cup stadiums and other tournament projects."

Qatar say that only three laborers died in work-related accidents during the construction of eight World Cup stadiums. It has been accused of under-reporting deaths on other projects, however.

The committee said Qatar had made reforms that had been "recognized" by some international rights groups "as a model that has accelerated progress and improved lives." It also said it had had "robust and transparent dialogue" about this with the critical Danish football federation, the DBU.

"We urge the DBU to accurately convey the outcome of their extensive communication and work with the Supreme Committee, and to ensure that this is accurately communicated to their partners at Hummel."

After qualifying for the competition, the DBU had said it would be taking steps to shine a spotlight on rights issues in Qatar. The DBU said that its two training kit sponsors would make way for messages critical of Qatar or in support of causes. It said it would also limit the number of trips to the Gulf country to participate in commercial events connected to the competition.

England's Football Association has called on Qatar to compensate families of migrant workers killed or injured while constructing infrastructure related to the World Cup.

The Muslim monarchy's handling of LGBTQ rights is also likely to court protest during the competition starting on November 20.

England captain Harry Kane has said he will wear a "one love" armband during the competition as part of a Dutch campaign to take a stand against discrimination. France, Belgium, Germany, Norway, Sweden, Wales and Switzerland are also supporting the campaign.