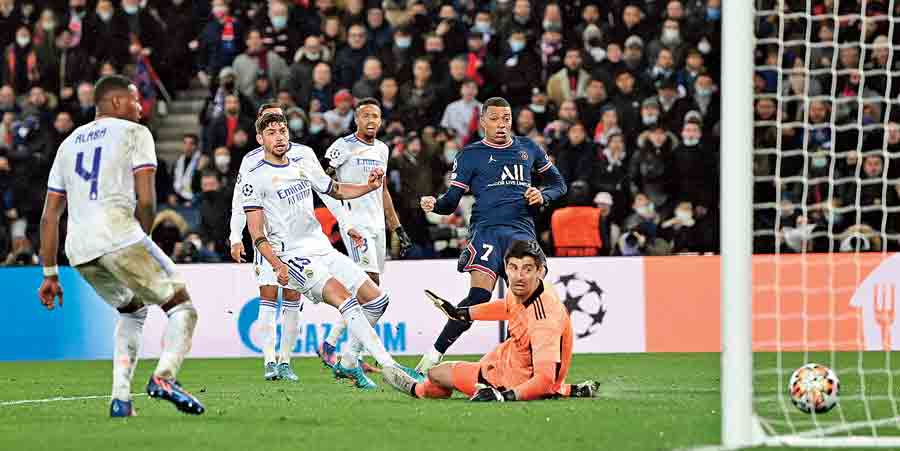 France international Kylian Mbappe said he is happy at Paris Saint-Germain, but the forward still remains undecided over his future at the Ligue 1 club as rumours continue to swirl over a possible move to Spanish giants Real Madrid.

On Tuesday Mbappe scored a late winner as PSG defeated Real 1-0 in the first leg of the pair’s last-16 match-up in the Champions League. The 23-year-old’s PSG contract is due to expire at the end of this season.

“I’ve not decided my future. I play for Paris Saint-Germain, one of the best clubs in the world,” Mbappe said after Tuesday’s match.

His goal triggered wild celebrations from PSG fans, and Mbappe was asked whether Tuesday’s acclaim might play a part in shaping his decision.

“No, I’ve not decided,” he replied. “I give my best and then we will see what happens next season.”

PSG turned down an offer of around $182 million from Real for Mbappe last August, even though the player had less than a year left on his contract. Now Mbappe, who has 22 goals and 16 assists in all competitions for PSG this season, is expected by many to move to Real on a free transfer at the end of this campaign, having so far resisted offer to sign a new deal with the Parisian club. “How to ignore the (transfer) context? It’s easy, you have to play football,” Mbappe added.

“We ask too many questions, we say too many things. We talk about PSG and Real, two big clubs. I’m a PSG player, I’m always very happy.”

Coach Mauricio Pochettino was delighted with his team’s performance but had a special praise for Mbappe’s sublime late strike.

Mbappe spared PSG a frustrating night as he skipped through the Real defence in stoppage time to secure a 1-0 win. “It’s a narrow win perhaps but it gives us hope for the game in Madrid,” Pochettino told reporters.

“I’m happy with the performance and I hope we can continue to give this kind of performance in future.”

Despite his disappointment at a penalty miss by his fellow Argentine Lionel Messi, the coach expressed satisfaction with how PSG dominated possession and stifled Real.

Manchester City coach Pep Guardiola said Bernardo Silva was the “perfect player” after the Portuguese midfielder’s double helped his side to secure a 5-0 win over Sporting Lisbon.

Manchester City were dominant from start to finish in the Portuguese capital to all but seal their spot in the quarter finals, with the five-goal victory the joint-biggest winning margin in a Champions League knockout game.

Silva scored his first-ever Champions League brace and his first goals in the competition in almost a year in a vintage display, a performance all the sweeter given that he came through the academy at Sporting’s rivals Benfica.

“I always tell him ‘you are the perfect player’,” Guardiola said. “With the ball he is more than exceptional, but I always say to him you have to go and win games, you have to have the ability to do it. He has the technique, everything.

“This was his home town (Lisbon), and he loves coming back here. Of course he is a former Benfica player, so this was special for him tonight.”

Looking to go one better after losing in the final to Chelsea last season, and pursuing the one major trophy that has eluded Guardiola since he joined City in 2016, the Premier League champions laid down a marker in Lisbon.

But despite steering his side to their biggest ever win in an away game in any round of the competition, the Spaniard was not totally satisfied with what he saw in the Jose Alvalade Stadium.