Expectedly, the biggest demand in the Bengali diaspora was to play in the Mohun Bagan and East Bengal fan teams 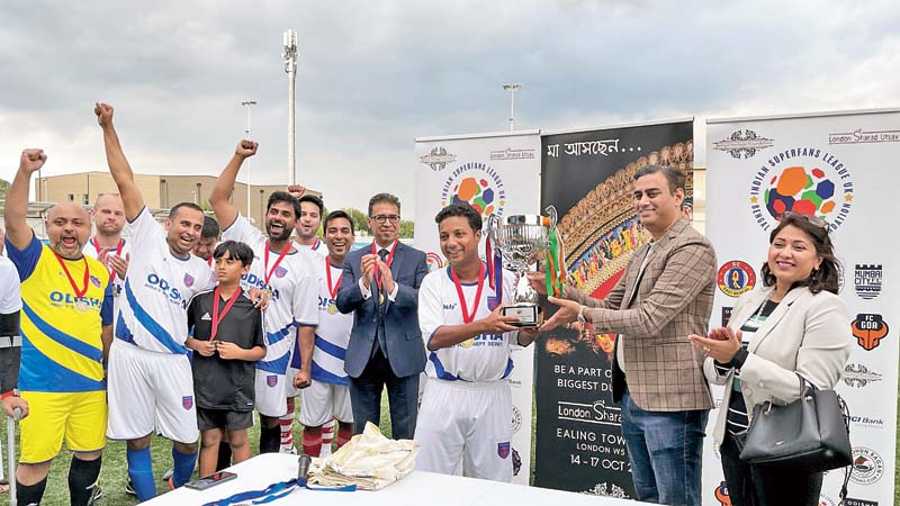 Rohit Vadhwana, first secretary, Indian High Commission in the UK, handing over the winner’s trophy to Deep Ratan Sarkar, captain of Odisha FC Superfans as the rest of the team cheers. Also seen applauding in the picture is Raj Athwal, the president of Odisha FC
Sudeshna Banerjee   |   Published 16.09.21, 07:16 AM

They sent out video messages urging them to do well in the first Indian Superfans League (ISL UK), in which the teams would play in the respective official club jerseys.

The Bengal Heritage Foundation (BHF), a UK-based organisation which promotes shared heritage between Bengal and Britain, was holding a six-a-side football tournament, which has been christened Indian Superfans League. “Last year, the Indian High Commissioner Gaitri Issar Kumar met us to understand what the foundation does. She remarked that the Indian diaspora always worked within respective communities and suggested that we take more cross-community initiatives. We used to hold an annual football match between East Bengal and Mohun Bagan fans. At her suggestion, we decided to expand that in the ISL format,” said Sourav Niyogi, president of the foundation.

The organisers waited out the period of Covid restrictions, while getting linkages in place with six ISL team managements. They also applied for and got affiliation from FA England. “Other than handling the English Premier League, FA has a community football initiative encouraging people to play the game for fun,” Niyogi explained. The affiliation mandated the presence of a community welfare officer to look over the locker rooms. “This is a safety measure as players of various age groups are involved in a tournament,” he added. 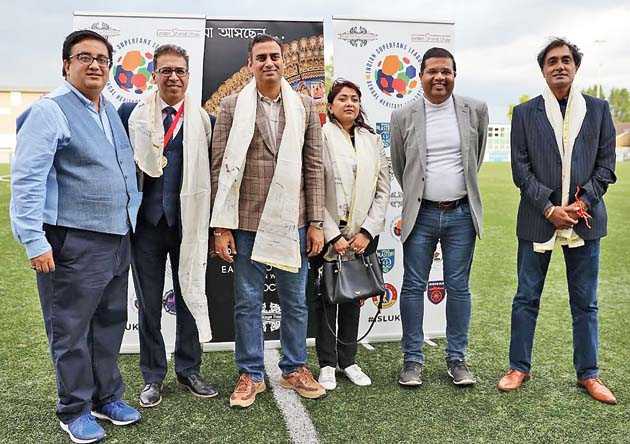 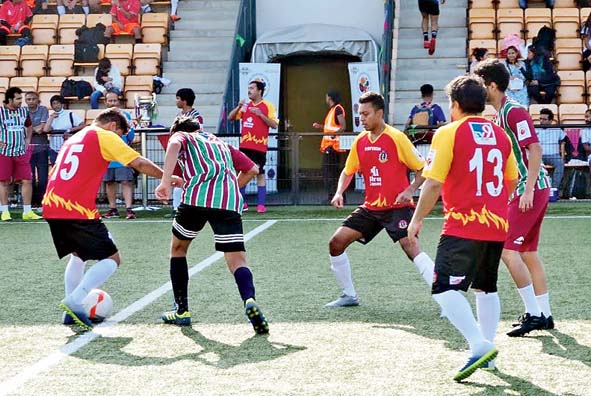 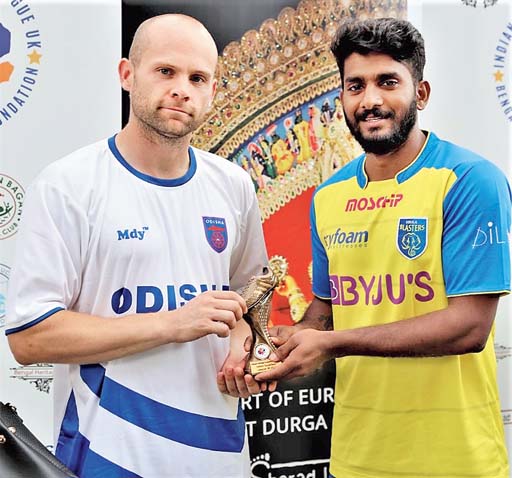 Nick Little of Odisha and Akhil Soman of Kerala, joint winners of the golden boot, with six goals each

Expectedly, the biggest demand in the Bengali diaspora was to play in the Mohun Bagan and East Bengal fan teams. The sons of the foundation members were mostly clubbed under ATK Mohun Bagan Superfans. “Two of them, Ronnie Roy and Aryan Bhadra, had their fathers Pradip and Kaushik, playing alongside them. Kripen Chatterjee’s father Koushik was in Odisha FC Superfans, though,” said BHF vice-president Suranjan Som.

But Marlow Youth Club, a local British club, wanted to play as the Mumbai City FC fan team. “Some of their players used to play with us informally. When they heard of the tournament, they wanted to field a team. Since diversity was our target we agreed immediately to take it beyond the Indian diaspora,” Niyogi said.

Nine matches were to be played at Arbour Park, Slough in west London. The teams would be of 12 to 14 players, with rolling substitutes. To maintain transparency, a Python-based software was used to divide the six teams into two groups. A clash between the red and gold brigade and the Mariners was averted in the group stage but since both ended at the bottom of the respective groups, the much-anticipated derby became a friendly exhibition match, in which ATK Mohun Bagan Superfans, mostly comprising  sons of the BHF members, won 2-0.

There was so much enthusiasm among the under-17 players of Marlow Youth Club, coached by their captain Steve Curties, that the families of several attended the match. “A boy’s father got so excited that he invaded the ground and got sent off to the gallery by the referee,” Niyogi recalled.

Odisha FC Superfans player-manager Koushik Chatterjee, who plays with some of his childhood friends from Jodhpur Park even now in London, said unlike the four other teams which were cobbled together with willing candidates, they and the Marlow YC boys were at an advantage as the players were in practice as teams. “We know each other’s game. Another friend, Sumay Banerjee, a Dhakuria boy who used to play with us in Jodhpur Park, had just shifted to England from Dubai. He was invited to hop over.”

Odisha took the lead early but with three minutes to go for the final whistle, conceded the equaliser. “Our strategy was to score early and then defend as we could not hope to match in stamina with teenagers. That strategy almost succeeded,” said Chatterjee, who as goalkeeper felt guilty about the late goal.

The Odisha fans scored all three penalties, and, much to Chatterjee’s relief, one by the Mumbai City FC fans went off-target, thereby clinching the title for Odisha. “The Marlow youngsters had got so involved that their goalkeeper was in tears for not being able to keep any of the shots out,” Niyogi said.

As Deep Ratan Sarkar, the Odisha fans captain, received the winner’s trophy from Rohit Vadhwana, the first secretary of the Indian High Commission, one person among the spectators was sporting a grin as wide as the players. Raj Athwal, the president of Odisha FC, is a resident of Coventry and was present to cheer his team’s superfans. He shared his excitement on Twitter, tagging JuggernautsOFC, the official fan club’s handle.

“The fan team was determined and resilient and of course I had high expectations. All penalties are tense as it is a complete lottery. But the Odisha fan team kept its cool. The team played tremendously throughout the event without losing a match. Hopefully this will translate to the Odisha FC team in the ISL!” Athwal wrote later to t2.

“The event itself was special as it was very much geared towards families. There were places to eat, cultural stalls and fine Indian food...,” he added.

The match day ended with Puja shopping for most spectators, as 17 stalls were selling sari, jewellery and sweets at the venue as part of London Sharad Mela.