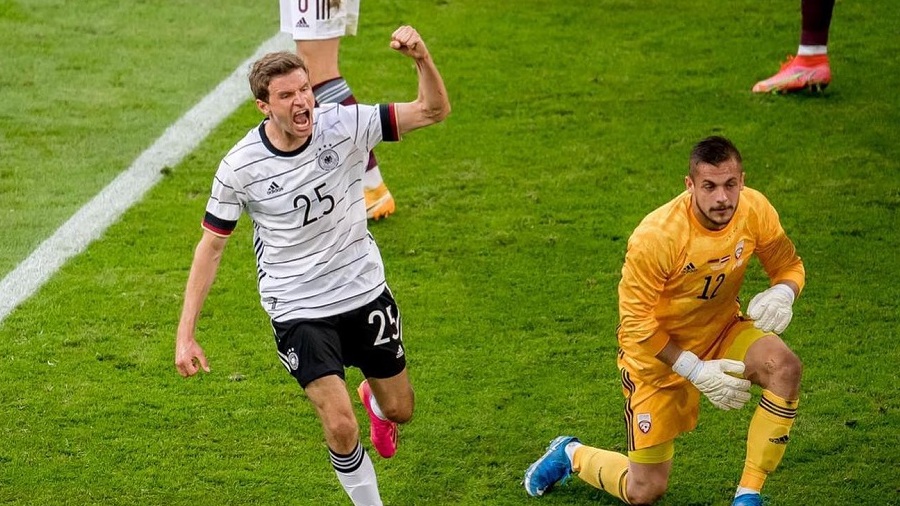 After being recalled to the national side after a two-year hiatus, Thomas Muller scored his first goal since March 2018 as Germany thrashed Latvia 7-1 in their final warm-up friendly before the Euro 2020 finals.

But for Muller, Germany’s performance in the upcoming matches matters more than his personal exploits. “The result wasn't the most important thing, it was more about the way we wanted to play football and implement things. It felt good, it was a convincing win, but we know that France will be a different proposition, that's clear,” Muller told AFP. Germany will face France in their opening game in Munich on June 16. Germany will also face Portugal and Hungary in Group F.

Kai Havertz was involved in three of Germany's five first-half goals on Monday before making way for Chelsea teammate Timo Werner for the second half.

Latvia reported a positive result for the coronavirus among the team hours before kick-off. But Germany coach Joachim Low couldn’t have asked for more from his side as it produced a complete and concentrated performance. “It will be difficult to play against us,” said captain Manuel Neuer, who became the first Germany goalkeeper to reach 100 appearances. He was applauded before the game by some 1,000 spectators permitted amid coronavirus restrictions.

Kevin De Bruyne has returned to the Belgium camp after undergoing an operation for a minor facial injury he suffered during the Champions League final, which Chelsea won 1-0. Belgium coach Roberto Martinez feels rejuvenated with De Bruyne’s return to the national squad. “Kevin De Bruyne has joined the group and that's fantastic news. He looks ready, he looks fresh, and just to see him walking into the dining room was a real highlight of the day,” Martinez was quoted as saying by AFP.

The Belgium coach thinks De Bruyne might not be ready to take the field against Russia in their first Group B fixture on Saturday. “He joins the medical department now for the next few days and then whenever we get the green light he is going to be integrated into the sporting side. At the moment I am not counting on Kevin to be in the first game but if that changes it will be because he adapts well to his own programme,” said Martinez.

N'Golo Kante has had an amazing season with Chelsea, playing a pivotal role in the Blues winning the Champions League.  France coach Didier Deschamps feels Kante can be a contender for the coveted Ballon dÓr award. “The Ballon d'Or? He deserves it. You know the criteria as well as I do, it mainly concerns offensive players. When there was a defender or a midfielder, it was because there was no attacking player who had really marked the football year,” the France coach was quoted as saying by Goal.com.

Andriy Yarmolenko scored twice including a penalty as Ukraine eased to a 4-0 win over 10-man Cyprus in their final warm-up game for the tournament.

The visitors’ hopes of an upset were effectively ended when Antreas Panayiotou was sent off after conceding the first of two penalties in the 36th minute. Oleksandr Zinchenko scored the other penalty and Roman Yaremchuk got the other goal.

Ukraine is in Group C with Austria, the Netherlands and North Macedonia. Also, the Faeroe Islands routed Lichtenstein 5-1 and Andorra drew with Gibraltar 0-0.