This season, the ex-India captain appears to be seriously rattled, managing only 13 runs in his last four innings at an average of just 3.25 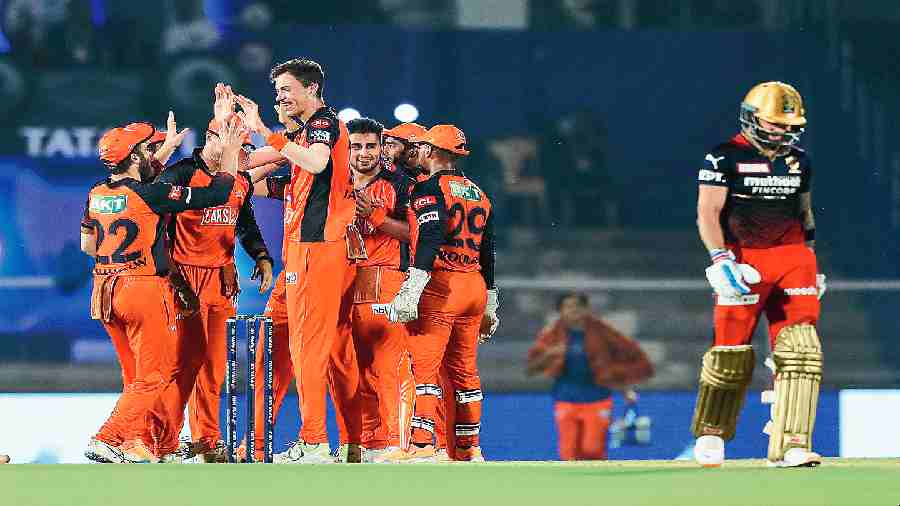 A dejected Virat Kohli (right) walks back to the pavilion after being dismissed for a first-ball duck by Marco Jansen on Saturday.
PTI
A Staff Reporter   |   Published 24.04.22, 01:47 AM

Virat Kohli was expected to bat freely and express himself better in IPL 2022, having relieved himself of captaincy from all formats of the game early this year.

But his indifferent form in international cricket appears to be haunting the former India and Royal Challengers Bangalore (RCB) captain in this IPL as well.

After being dismissed off his first ball against Lucknow Super Giants last Tuesday at the DY Patil Stadium in Navi Mumbai, Kohli suffered a similar ignominy versus Sunrisers Hyderabad at the Brabourne Stadium in Mumbai on Saturday. This time, it was left-arm quick Marco Jansen who sent Kohli back with the very next ball after knocking off RCB captain Faf du Plessis’ off-stump.

Kohli’s first-ball dismissal against Lucknow off Sri Lankan Dushmantha Chameera’s bowling was a poor shot. It was an outside off-stump delivery, and Kohli gave catching practice to the fielder at point. On Saturday, Jansen, who had troubled Kohli during the recent India-South Africa Tests and also dismissed him once (in the second innings of the first Test in Centurion), brought the ball back in just a bit, pitching it up. Kohli again made the mistake of pushing hard at it and was caught at second slip which Sunrisers skipper Kane Williamson had brought in.

Yes, even the best in the business suffer back-to-back first-ball dismissals. Besides, Kohli wasn’t outstanding with the bat either in IPL 2021. But this season, he appears to be seriously rattled, managing only 13 runs in his last four innings at an average of just 3.25, which isn’t a good sign at all for him as well as for RCB. It’s high time Kohli addresses his problems outside off-stump.

As for the RCB management, should they rest Kohli for a game or two, which could allow him to come back with a fresher mind? Former India coach Ravi Shastri did say the other day that Kohli was mentally “fried”. The franchise may need to give it a thought.