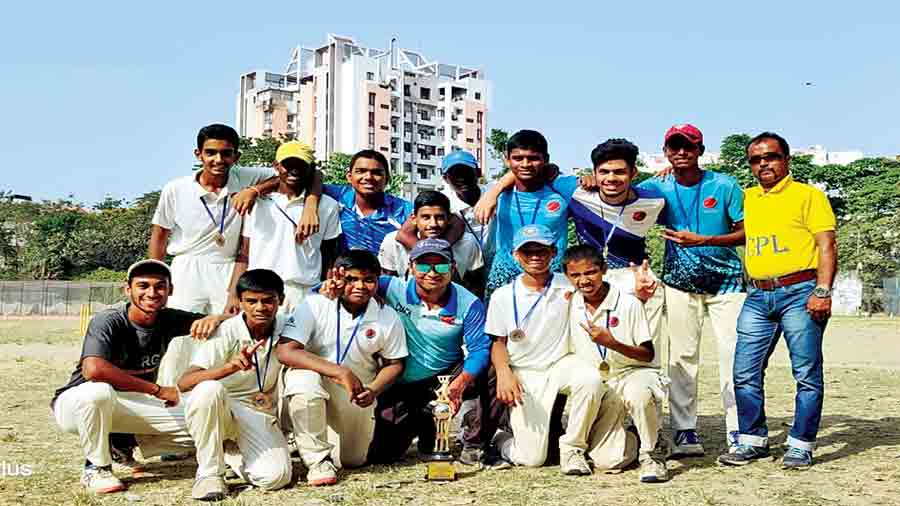 The five-month long multi-day U-15 cricket tournament, the Mantoo Ghosh Challenge Cup, which ended on Friday got overwhelming response in its inaugural edition. Mainland Sambaran Cricket Academy (MSCA) emerged champions with an emphatic 493-run win over Tarun Sangha Cricket Academy in the final.

Batting first on Thursday, the first day of the two-day match, MSCA scored an imposing 635 off 80 overs. Tarun Sangha were bundled out for 142 runs in 34 overs on Friday.

MSCA captain Joheen Das was adjudged Man of the Match for his 294 off 171 balls. MSCA’s Akshu Giri, who scored 161 in the final, was named player of the tournament for his 862 runs in five innings.

“The format of this tournament made a huge difference to the players who are overloaded with limited overs cricket,” former national selector and Bengal’s Ranji Trophy winning captain, Sambaran Banerjee, said.

“Most importantly, the format taught children to be patient. Bowlers learnt to bowl long spells, fielders how to concentrate while fielding all day. This is exactly the kind of cricket to which children should get more exposure for their own good in the long run.”

A total of 38 matches were played. The schedule got disrupted by the pandemic, unseasonal rain and school examinations. As many as 52 centuries were scored in the meet and the bowlers claimed 800 wickets.

The format for the knock-out phase was 80 overs per side and single innings. In the league phase, each team played two innings.

The biggest individual score in an innings came from Ayush Roy of RC Sporting Club, the second highest scorer of the tournament with 617 runs from three innings, who scored a scintillating 425 off 162 balls against Mohammedan Sporting Club in their first league match.

The top pick among bowlers was MSCA’s Rudraneel Das, who claimed 31 wickets from six innings.