Jhulan Goswami hangs up her boots on a winning note 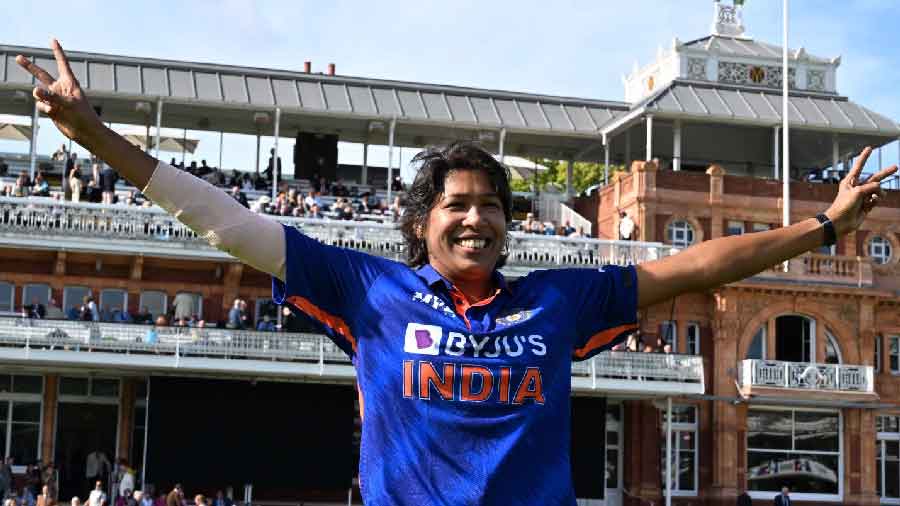 A fairy-tale ending befitting her glorious career marked Jhulan Goswami's last waltz as India Women beat England by 16 runs in the third and final ODI to record their first clean sweep in this country.

That the feat was achieved at the Mecca of Cricket - Lord's - made it doubly satisfying.

Sent into bat, India were all out for a paltry 169, and at that point it looked like the tourists may have fallen many runs short of making the match a memorable one for their legendary seamer, who is calling it quits after two decades of incredible service to the game.

However, the Indians managed to eke out a win as Charlotte Dean (47) was adjudged run out in controversial fashion, for backing up.

Dean, who nearly pulled off a stunning win for the hosts after they were reeling at 65 for seven and then 103 for eight, was out of her ground and Deepti Sharma simply held the ball to remove the bails, leaving the English flabbergasted.

Recently, ICC while modifying the playing conditions had moved this kind of dismissal from 'unfair play' to 'run out'. The changes would come into effect from October 1.

On expected lines, the day revolved around the 39-year-old warhorse Jhulan Goswami, who is leaving the scene as women's cricket's highest wicket-taker, having started her journey way back in 2002.

Harmanpreet Kaur, who let Jhulan call the toss in a touching gesture, was unable to hold back her tears, even as the Cricket Association of Bengal (CAB) planned to name a stand at the Eden gardens after the 'Chakdaha Express'.

She finished with excellent figures of 2/30 in her full quota of 10 overs, including three maiden overs.

The competitive Indian has seen the game evolve during her long journey that was marked with some unforgettable moments and few unpleasant days.

While she was not expected to be at her peak in her final series, Jhulan did enough on her own to go out on a high, having bowled tidily in her last three international matches.

She was lucky to have got her first wicket of the day with a short one, her second scalp came when the pacer bowled Kate Cross with her ball number 10,001 in ODIs, again something which no other player has achieved

England captain Amy Jones's decision to field first seemed to have paid dividends as India kept losing wickets at regular intervals to be bundled out in 45.4 overs. India were in deep trouble at 29 for four pretty early into their innings, but them came the revival.

All-rounder Deepti Sharma top-scored for the visitors with an unbeaten 68 off 106 balls, while opener Smriti Mandhana was the second highest scorer, making exactly 50 runs in 79 deliveries.

Barring these two, and Pooja Vastrakar (22), to some extent, none of the Indian batters could make any substantial contribution in the final game of the series, which the tourists had pocketed with wins in the first two matches.

Among England bowlers, medium pacer Kate Cross returned with excellent figures of 4/26, while there were two wickets apiece for Freya Kemp and Sophie Ecclestone.

Shocked by back-to-back reverses in their own den, England entered the game looking to stop the Indian juggernaut and bag a consolation win. When they two teams walked back to the dressing room at the end of the first innings, England looked to be on the right track.

However, after getting off to a steady start England suffered their first blow when Yastika Singh pulled off an excellent stumping to signal the end of Emma Lamb's (21) stay in the middle, the successful bowler being Renuka Singh.

Playing in her 100th match, Tammy Beaumont (8) was out bowled by Renuka, and then, Jhulan got involved in the thick of things, removing Alice Capsey for 5.

Sophia Dunkley (7), too, fell cheaply, to Renuka, as England slipped to 43 for four in the 12th over. It became 53 for five in the next over as left-arm spinner Rajeshwari Gayakwad hit the top of Danni Wyatt's midle stump.

Sophie Ecclestone lasted barely three balls with Gayakwad striking again to leave the hosts tottering at 53 for six in the 15th over.

England seemed to have found their saviour in the duo of skipper Jones (28) and Charlie Dean, but Renuka sent the former back to keep India ahead.

The last time the Indian women won an ODI series in England was in 1999 when they triumphed 2-1.