Five-wicket win after an early exit from the T20 World Cup should keep Rahul Dravid and Rohit Sharma in good spirits, especially as far as India’s bowling is concerned 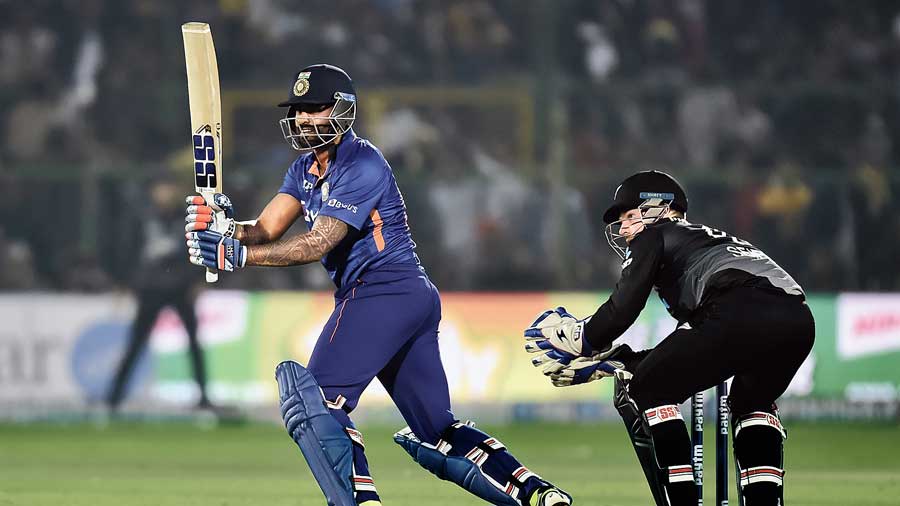 Rahul Dravid should be reasonably pleased with his wards’ performance in his maiden appearance as full-time India head coach. That said, he must also be having a few reasons to worry as despite cruising at one stage in pursuit of a 165-run target, his players stretched it till the final over of this first T20I at the Sawai Mansingh Stadium in Jaipur on Wednesday.

Fortunately for Team India, New Zealand’s interim captain Tim Southee got his calculations completely wrong and thus had no other option but to bring on part-timer Daryl Mitchell for the deciding over in which the home team needed 10 to win. Mitchell’s two wides aside, he also dished out a couple of freebies much to the liking of debutant Venkatesh Iyer and Rishabh Pant (17 not out) as India eventually reached home with two balls remaining.

Overall though, this five-wicket win after an early exit from the T20 World Cup should be keeping Dravid and Rohit Sharma, who also made his first appearance as India’s full-time skipper in T20Is, in good spirits, especially as far as India’s bowling is concerned.

Agreed New Zealand looked a dead outfit, especially after going through a severe pressure game in the T20 World Cup final barely three days ago. The catch that Trent Boult, who wasn’t looking comfortable at all early on during India’s reply, dropped late in the game to let Surya-kumar Yadav (62) off was one indication of fatigue in the visitors’ camp.

With the conditions getting tougher for bowlers, particularly in the second half, the Indian batsmen looked in control till a scratchy Shreyas Iyer brought New Zealand back in the game after Suryakumar departed against the run of play off Boult.

Obviously, it couldn’t have been better for India had Suryakumar fired in the all-important opener versus Pakistan in the T20 World Cup. But that this supremely talented batsman has regained touch certainly bodes well for him as well as the team.

Right through his stay, Suryakumar was at his spontaneous best, churning out magnificent strokes on almost all sides of the ground that didn’t give New Zealand a chance after a set KL Rahul perished off the very first ball of Mitchell Santner’s spell.

In other words, the authority with which Suryakumar batted right from the onset allowed skipper Rohit (48) to carry on with his natural game.

The spells of Bhuvneshwar Kumar (2/24) and Ravichandran Ashwin (2/23) had a significant contribution in terms of determining the outcome of the game. Their bowling was the main reason why New Zealand couldn’t go beyond 164/6 after being put in.

Bowling 13 dot balls, Bhuvneshwar gave India just the start they need when he picked up the prized scalp of Mitchell with the third ball of the game. But the Hong Kong-born Mark Chapman (63) and Martin Guptill (70) did a fine job.