The emphatic win was India's fifth victory in six games, with the only defeat coming in a low-scoring match against arch-rivals Pakistan 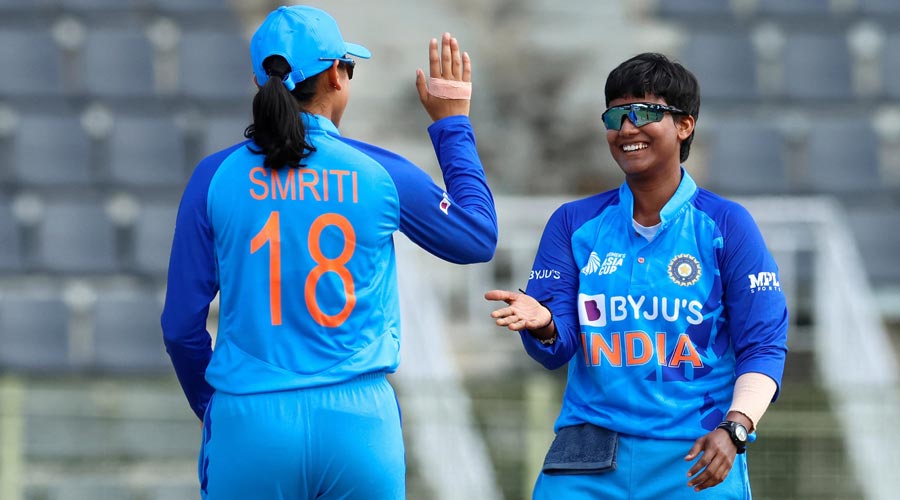 The Indian bowlers hardly broke sweat to dismiss minnows Thailand for a paltry 37 before knocking off the runs in just six overs with nine wickets in hand to top the seven-team group league in the Women's Asia Cup, here on Monday.

The emphatic win was India's fifth victory in six games, with the only defeat coming in a low-scoring match against arch-rivals Pakistan.

India have 10 points from six games and are expected to be joined by Pakistan, Sri Lanka and one among Thailand and Bangladesh in the semifinals.

When stand-in skipper Smriti Mandhana won the toss, she had no hesitation to put Thailand onto bat and from thereon, it became an ordeal for the inexperienced Thai women.

The gulf in class was so huge that before getting out in the 16th over, Thailand could manage only 37 runs. The only batter to reach double figures was Nannapat Koncharoenkai (12) as the second highest score was 7 by Nattaya Boochatham.

In fact, Nannapat and Natthakan Chantham's (6) 13-run opening stand was their highest as wickets tumbled like nine pins once India were able to drew the first blood.

Meghna Singh also chipped in with a wicket while the only one to go wicketless was Pooja Vastrakar.

Vastrakar (12 not out) was, however, was sent up the order at No. 3 to get some batting time under her belt as she along with opener S Meghana (20 not out) knocked off the runs in just six overs.

"A big shout out to all girls for making my 100th T20 International special," stand-in skipper Mandhana said after the match.

"I wouldn't say weaker opposition and Thailand played good cricket but our bowlers really didn't give them any chance," Mandhana was all praise for her bowling unit.

Player of the match Sneh Rana said: "A win like this lifts confidence and we would definitely do well in the semifinal."