Chandrakant Pandit has instilled character & discipline in team, traits Arun Lal’s side could pick up 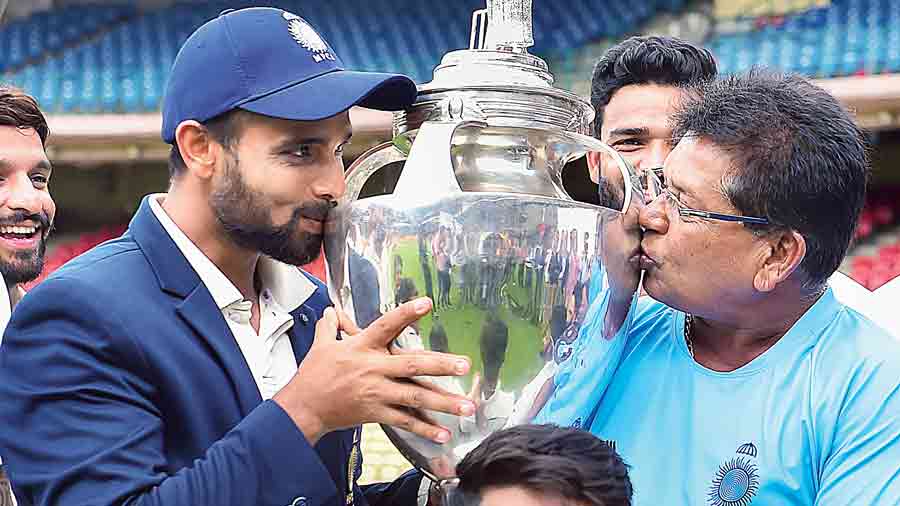 MP coach Chandrakant Pandit (right) and captain Aditya Shrivastava kiss the Ranji Trophy after their win over Mumbai in the final on Sunday
PTI
Indranil Majumdar   |   Calcutta   |   Published 29.06.22, 02:46 AM

Not many years ago, the Cricket Association of Bengal (CAB) had toyed with the idea of recruiting Chandrakant Pandit as coach for the senior team. Pandit had then just won his second successive Ranji Trophy with Vidarbha and was much sought after by several teams.

The idea was shelved once the CAB felt they had “to shell out a fortune” to hire his services. Pandit also demanded a three-year contract with supreme authority in running the affairs of the team. The CAB’s reluctance has turned out to be Madhya Pradesh’s gain as they lifted their maiden Ranji Trophy under Pandit’s stewardship on Sunday.

Pandit, popularly known as Chandu, has always carried the khadoos mentality of the Bombay school of cricket — stubbornness and a never-give-in attitude.

Pandit has excelled in transforming an unheralded bunch of youngsters into champions in the domestic circuit. Arun Lal showed similar traits when he took charge as Bengal made the final in 2019-20. Their challenge ended in the knockouts in the next two seasons, this time losing to the eventual champions in the semi-finals.

Like Lal, Pandit ruled with an iron fist. The tough taskmaster made it clear that his was the last word in the team. The players had to make a lot of sacrifices, including staying away from social media. So much so that captain Aditya Shrivastava had to seek the coach’s permission before marriage and was given only two days off from training.

Left-arm spinner Kumar Kartikeya, a wrist spinner, was told to perform the role of an orthodox finger spinner. He took up the challenge and finished as the second highest wicket-taker this season with 32 scalps in six matches.

Every player was handpicked by Pandit. Yash Dubey and wicketkeeper Himanshu Mantri were made to open at Pandit’s insistence. Rajat Patidar was dropped to No.4 after Shubham Sharma was found to be more suited at No.3. The results have been fabulous.

In the semi-final against Bengal, Madhya Pradesh’s mental strength stood out. Even twin centuries from Manoj Tiwary and Shahbaz Ahmed failed to inspire Bengal as Patidar and Shrivastava took the game away in the second innings.

“The motivation has to come from within. Players have to learn to be mentally disciplined. It seemed like they had lost the match in the dressing room when faced with a 350-run target in the semi-final,” Bengal’s Ranji Trophy-winning captain Sambaran Banerjee told The Telegraph.

“If Chandu was in charge of Bengal, only half of the current set of players would have qualified. The system needs an overhaul,” said another former captain.

Questions have also been raised on the decision to travel without pace and spin bowling consultant Shib Shankar Paul and Utpal Chatterjee, respectively, for the knockouts. Similarly, the role of the director of cricket operations needs to be figured out.

If Bengal have any lessons to learn from Madhya Pradesh’s success, it has to be their daring and selfless approach. Perhaps only a change in mentality could show them the way forward.