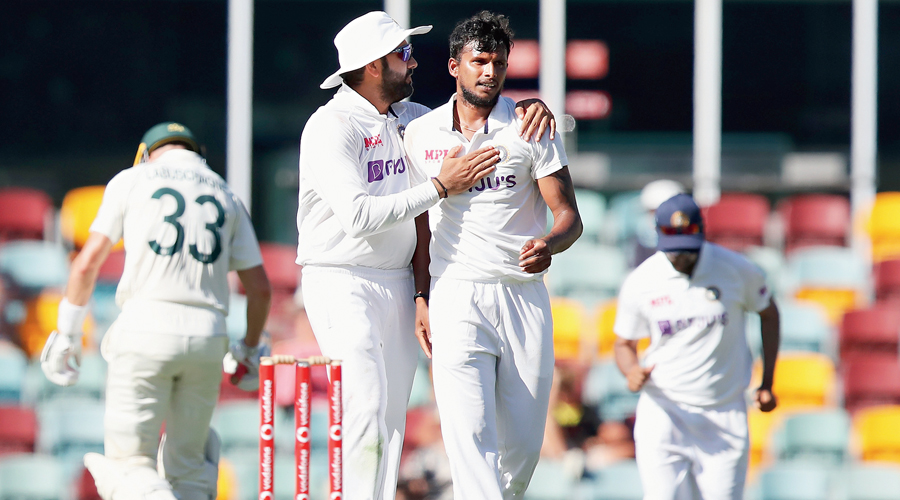 The match in Brisbane is more of a mismatch, at least on paper. Because on a day when the Australian team list featured Nathan Lyon, who is playing his 100th Test, the Indian XI had Mohammed Siraj, who has played just two Tests, as their most experienced bowler.

In fact, even if Lyon is discounted, the other bowlers in the Australian attack — Mitchell Starc, Josh Hazlewood and Pat Cummins — have a combined experience of 147 Test matches. On the other hand, the Indian team, poorer after an unprecedented number of injuries to their first-choice bowlers, have Siraj, Navdeep Saini (1 Test), Shardul Thakur (1 Test) and debutants T. Natarajan and Washington Sundar making up their bowling line-up.

However, despite such an imbalance, India did commendably well on the opening day of the fourth and final Test of the Border-Gavaskar Trophy, restricting the Aussies to 274/5 when the stumps were drawn. That, despite a good knock from Marnus Labuschagne (108 off 204 balls).

The Indians would be proud of their bowling effort on an unusually batsman-friendly Gabba wicket, more so after top picks Jasprit Bumrah and Ravichandran Ashwin failed to recover sufficiently from their injuries.

Natarajan’s fairy tale had another chapter added to it as the Tamil Nadu seamer picked up two wickets, including that of centurion Labuschagne, on his very first day in Test cricket. From accompanying the Indian contingent to Australia as a net bowler, to making his international debuts in all three formats inside three months, Natarajan is living a dream from which he would never want to wake up.

Australia, after losing openers David Warner and Marcus Harris early, were pulling the match away from India at one stage with Labuschagne and Matthew Wade fluently picking up runs. But Natarajan broke the 113-run partnership, dismissing both the Aussies in quick time.

Labuschagne though rode his luck as he was dropped at gully by captain Ajinkya Rahane when on 37.

Off-spinner Sundar, all of 21 years, snapped up big fish Steve Smith (36) as his first Test wicket.

Tim Paine (38 batting) and Cameron Green (28 batting) added 61 runs for the sixth wicket to help the hosts keep their nose ahead in the contest.

India would need quick wickets on the second day to keep the Aussies in check, but that will not be easy as they are already one bowler short.

Saini became the latest addition to the injury list when the pacer had to leave the field after bowling five balls in his eighth over because of a groin niggle. He was taken for scans soon after.

Washington has always been seen as better suited for white-ball cricket and his exploits for Royal Challengers Bangalore in the IPL too pointed in that direction. But the young spinner thinks differently.

“I have always felt that my skills are very good with red ball. I was just waiting for this opportunity,” Washington said at the virtual media conference after the day’s play.

He went on to add: “Like any bowler, I love bowling a lot of overs. It’s just so much fun. Give me 20, 30, 40 or 50 overs. We had some plans going for Steve Smith and (Marnus) Labuschagne and I am very glad they worked. The first wicket definitely felt good.”