The 25-year-old from Queensland sent the home crowd into raptures with a 6-3, 7-6 (7-2) victory against Danielle Collins 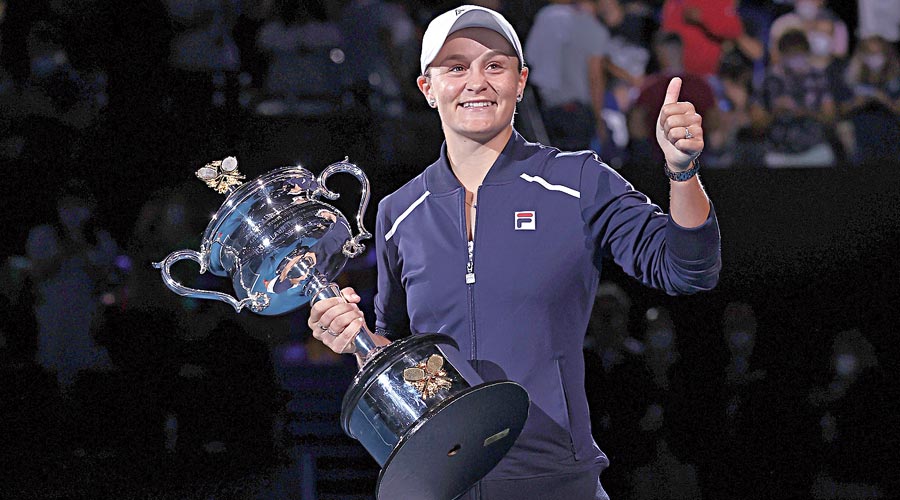 Ashleigh Barty acknowledges the crowd at the Rod Laver Arena on Saturday after winning the Australian Open women’s singles final against Danielle Collins.
(Getty Images)
The Telegraph   |   Published 30.01.22, 01:17 AM

A standing ovation from 11,800 spectators greeted Ashleigh Barty as she entered the Rod Laver Arena in Melbourne on Saturday. And she walked out of the court amidst cheers after winning the Australian Open women’s singles crown.

Thanks to Barty, a long Australian sporting drought finally came to an end. Forty-four years after Chris O’Neil’s triumph, Barty became the first home player, male or female, to win a singles title at the Australian Open.

The 25-year-old from Queensland sent the home crowd into raptures with a 6-3, 7-6 (7-2) victory against Danielle Collins, the No. 27 seed from the United States. In one of Australia’s greatest national sporting occasions since the Sydney 2000 Olympics, it was perfectly fitting that Cathy Freeman and Ian Thorpe were among those on their feet to congratulate the new champion.

Evonne Goolagong Cawley, a tennis icon with seven grand slam titles and a trailblazer for Indigenous athletes from Australia, was a surprise guest to present the champion’s trophy to Barty, who is part of a new generation of Indigenous stars.

O’Neil was involved in the night, too, after carrying the trophy into the stadium for the pre-match ceremony.

Under the heavy weight of expectation, Barty’s run throughout the entire fortnight has been one of the most impressive ever seen by a tennis player on home soil. The world No. 1 did not drop a set in seven matches and has joined Serena Williams as one of only two active players to win grand slam titles on all three surfaces of hard, grass and clay.

She had won on grass at Wimbledon last year and on clay at the French Open in 2019. She will bid later this year to complete the career grand slam at the US Open.

“This is a dream come true for me and I am so proud to be an Aussie,” Barty said. “It is incredible. Time and time again we’ve come so close. Now to have my hands on this beautiful trophy after such an exceptional fortnight is unbelievable.

“I think I just tried to get a little bit more aggressive in the second set. I gave Danielle too many looks at second serves and she was able to take that on. I was just trying to get some momentum going.”

The tournament organisers had successfully persuaded local health authorities to approve an increase in capacity from 65 to 80 per cent, ensuring a feverish atmosphere for a match of considerable importance.

Barty settled any nerves with a comfortable hold in the opening game. But her first serve was not quite at the high level of previous matches this fortnight and she came under pressure at 2-2, saving a break point with a forehand winner before escaping with a hold for 3-2.

This proved to be a pivotal moment. Barty brought up a break point of her own in the next game and Collins crumbled, hitting a wild double fault that suddenly released the tension in the stands.

With the comfort of a break in her favour, a relaxed Barty took charge of the proceedings from here. Using her slice backhand to neutralise the power of Collins and stepping in to put away the short ball at any opportunity, she closed out the set with a hold to love.

Barty could not carry forward her momentum into the second set. Two errant forehands gave Collins two break points for 2-0, and the American converted the second with an overhead winner that was followed by a loud “come on” towards her support team. Barty then missed two chances to immediately break back in the next game as Collins moved 3-0 ahead.

Another break for 5-1 gave Collins two opportunities to serve out the set, but she failed to take both and Barty battled back to level for 5-5 in a stunning turnaround.

Both players held serve to ensure a nail-biting tie-break. Barty claimed the mini-break in the first point and quickly raced 4-0 ahead. With four match points at 6-2, she only needed one, hitting a cross-court forehand pass to seal a memorable victory.

Not just for Barty, Australia had more reasons to celebrate as the “Special Ks” — Nick Kyrgios and Thanasi Kokkinakis — claimed their first major title by defeating compatriots Max Purcell and Matt Ebden in the men’s doubles final.

Kyrgios and Kokkinakis, nicknamed the “Special Ks” as juniors, entertained the crowd with a 7-5, 6-4 victory.

They are the first wild card team to win the Australian Open men’s doubles title in the professional era.

The duo are also the first all-Australian men’s doubles champions at the season’s opening slam since Todd Woodbridge and Mark Woodforde triumphed in 1997.

Written with inputs from agencies