Advertisement
Home / Science-tech / ‘Your WhatsApp messages belong to you’

‘Your WhatsApp messages belong to you’

Transfer your chat history between Android and iOS 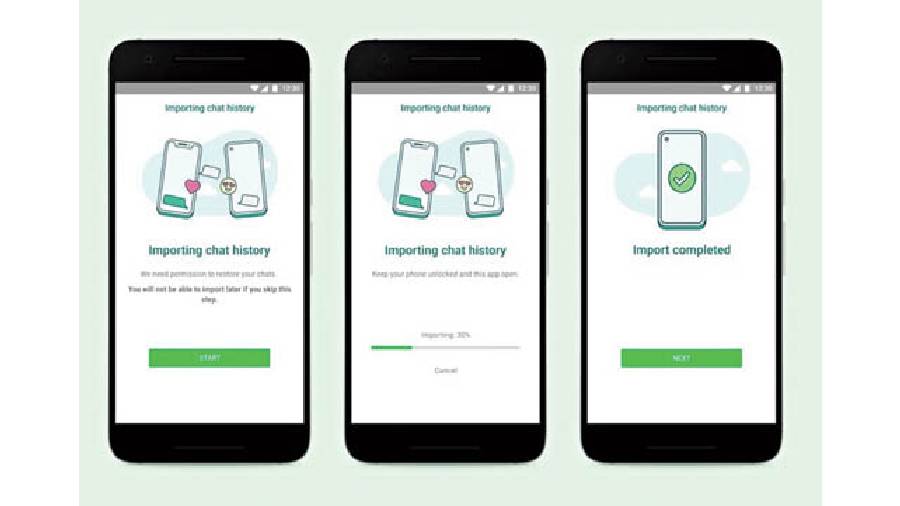 Users will be able to transfer their chat history between Android and iOS easily.
Picture: WhatsApp
Mathures Paul   |   Published 13.08.21, 12:03 AM

One of the biggest pain points in WhatsApp is finally being addressed — the ability to carry over chats between iOS and Android. The Facebook brand is adding the ability to let you transfer chat history when you switch from iOS to Android (vice-versa at a future date), including all voice notes, photos, and conversations.

The transfer will initially be allowed from iOS to Samsung’s new Galaxy Z Fold3 5G and Galaxy Z Flip3 5G with other Samsung phones “in the coming weeks”.

“Your WhatsApp messages belong to you. That’s why they are stored on your phone by default, and not accessible in the cloud like many other messaging services. We’re excited for the first time to make it easy for people to securely transfer their WhatsApp history from one operating system to another. This has been one of our most requested features from users for years and we worked together with operating systems and device manufacturers to solve it,” said Sandeep Paruchuri, product manager at WhatsApp.

The transfer, it has been reported, will take place via a physical lightning to USB-C cable rather than sending them via the Internet. But if you’ve transferred between iOS and Android in the past and have two separate cloud backups, the new transfer feature won’t merge them together into a single chat history.

The announcement coincides with the announcement of the new Samsung phones as the South Korean company clearly wants to rope in iPhone users with foldable phones. At the same time, WhatsApp has announced that users will be able to take their WhatsApp history from Android to iOS in the future.