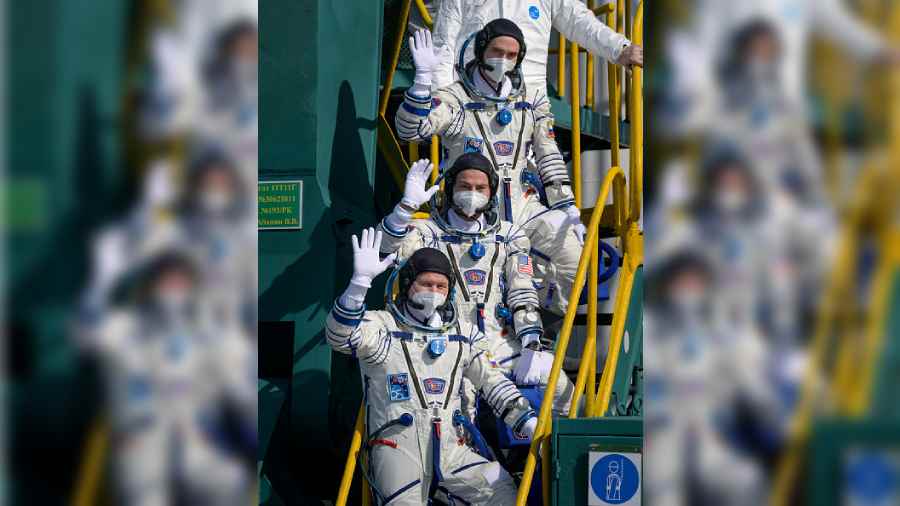 OneWeb, a satellite Internet company partly owned by the British government, has cancelled a planned satellite launch using a Russian rocket and suspended all future launches that relied on Russia, the company announced after a tense public stand-off with Roscosmos, Russia’s space agency.

Roscosmos announced that it would stop selling rocket engines to US companies.

The moves, fallout from Moscow’s invasion of Ukraine, stand to further isolate the Russian space agency from its Western space partners and limit Russia’s private space activities. OneWeb’s loss of a reliable rocket provider for launches also poses novel challenges for the company as it had aimed to complete its constellation of 648 satellites in orbit later this year.

OneWeb was rescued from bankruptcy in 2020 by the British government and other investors. It was scheduled to launch 36 satellites aboard a Russian Soyuz rocket from Kazakhstan recently. The company has sent roughly 400 satellites to orbit since 2019, every time using a Soyuz, a workhorse rocket that’s been active since the days of the Cold War space race.

But this time, just after the Soyuz rolled out to the pad before its launch, Dmitry Rogozin, Russia’s space chief, announced two conditions aimed at countering the sanctions placed on Russia over its invasion of Ukraine: the space agency would not proceed with the satellite mission unless Britain withdrew its multibillion-dollar stake in OneWeb and the company provided a “guarantee that its satellites will not be used for military purposes”.

Rogozin also posted a video on Twitter showing Roscosmos personnel on a platform next to the rocket covering up British, US and Japanese flags emblazoned on the rocket’s exterior. “The launchers at Baikonur decided that without the flags of some countries, our rocket would look more beautiful,” said Rogozin, a former deputy prime minister who often makes bombastic remarks on social media.

The space agency’s ultimatum, which came three days before the previously planned launch, spurred emergency discussions among British officials and OneWeb shareholders, who decided thereafter to cease all future launches from Baikonur, the spaceport in Kazakhstan where Russia conducts most of its launches. Rogozin suggested on Twitter that OneWeb’s decision would plunge the company into another bankruptcy proceeding.

Chris McLaughlin, OneWeb’s chief of government affairs, dismissed the warning. “This is an incredibly well-funded company with no debt, backed by powerful international shareholders who made the decision themselves,” he said.

Britain does not possess its own ability to launch large payloads. McLaughlin said OneWeb would look to alternative launch providers in Japan, India and the US.

“We always keep an eye on the launcher environment, but this is a totally new and unprecedented thing,” McLaughlin said.

The company was rescued from bankruptcy in 2020 by India’s Bharti Enterprises, OneWeb’s largest shareholder, and Britain, whose $500 million public investment in the satellite operator aimed to boost Britain’s space economy. Without rockets to launch on, OneWeb’s aim to complete its mega-constellation faces disruption. It is competing with SpaceX’s Starlink constellation to beam broadband Internet to remote regions around the world.

OneWeb had already faced pressure from British politicians to follow energy companies in severing Russian business ties. The company had paid for its Russian launches in bulk through Arianespace, a French rocket company, and had six more missions remaining under the contract — a launch lineup likely worth hundreds of millions of dollars.

In the coming days, OneWeb is set to enter negotiations with Arianespace to determine how to, if possible, retrieve the money for the suspended Soyuz missions, according to a OneWeb official who spoke on condition of anonymity to discuss sensitive business deliberations he was not authorised to disclose. The official added it was unclear to OneWeb executives when or how the 36 satellites currently in Russia for the scheduled mission would come off the rocket or where those satellites would be stored while OneWeb searched for a different launch provider.

Russia’s move to hobble the business of one of its space agency’s biggest commercial clients was perhaps the strongest example so far of how the war in Ukraine was spilling over into space, an area where the country has for decades found cooperation with countries that were once its Cold War adversaries.

Nasa, which jointly manages the International Space Station with Roscosmos, has said it intends to continue cooperating with its Russian counterparts. The two partners had been negotiating an agreement to launch Russian astronauts on Crew Dragon, a SpaceX vehicle that carries Nasa astronauts.

Beyond cooperation with Nasa, Russia said it would halt the sale of rocket engines to US companies.

“In a situation like this, we can’t supply the US with our world’s best rocket engines,” Rogozin said on Russian state television. “Let them fly on something else, their broomsticks, I don’t know what.”

The freeze may most acutely affect Northrop Grumman, which uses Russian-made engines for its Antares launch vehicle that ferries cargo to the space station for Nasa. SpaceX also provides this service to the space station, as do spacecraft launched by Japan and Russia.

In a more symbolic move, Rogozin said Russia would no longer provide assistance in the use of a different Russian engine already purchased and in use by United Launch Alliance for Atlas V, one of the most frequently used US rockets.