Motorola gets the design right with this one 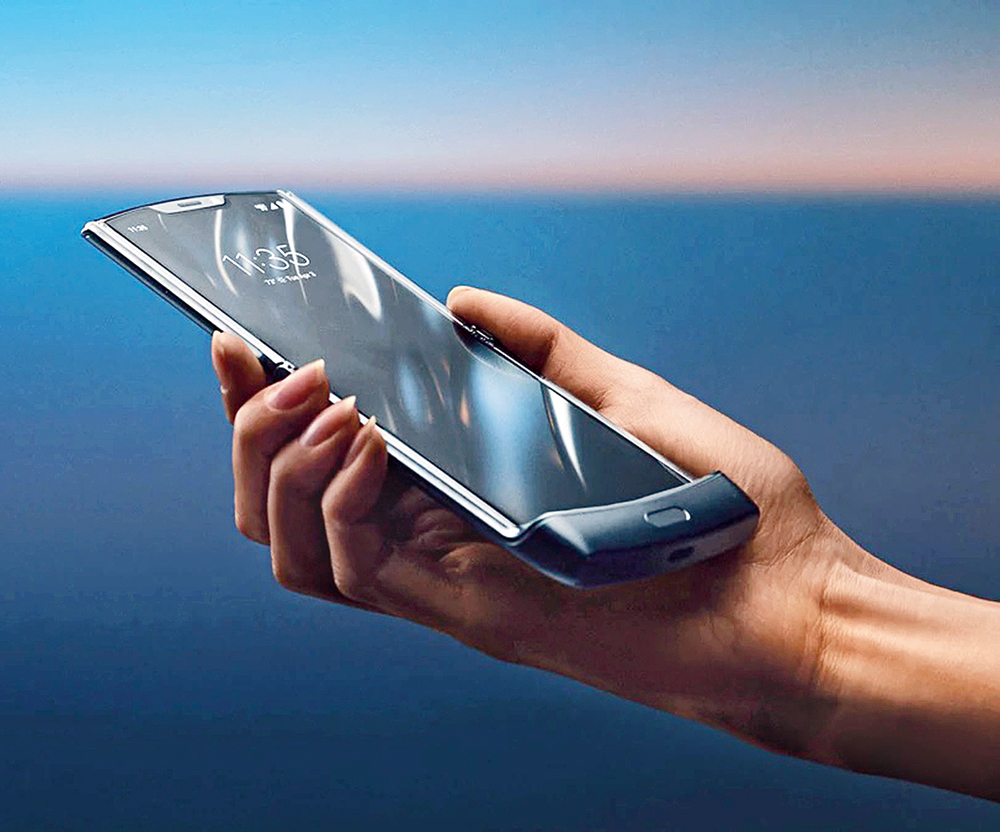 On the new Motorola Razr, the closing and opening mechanism is well thought out because of the hinge design
Picture: Motorola
Mathures Paul   |     |   Published 15.11.19, 12:57 PM

Motorola’s approach to the foldable is different from that of Samsung. While the South Korean electronics giant believes that people want a phone that can turn into a tablet, the Lenovo-owned company is offering a $1,499 phone that can halve in size with a snap. The question: Is the future of the smartphone a tablet-size offering or a miniature device… or something really different, like eyewear. According to Wired, the original idea wasn’t to bring back the Razr, but after seeing other flexible display designs, the company determined that clamshell was the way to go.

Opening and closing the phone appears to feel tactile, like it did with the original device. The mechanism is well thought out because of the hinge design. Unlike on the Samsung Galaxy Fold, Motorola has left some of the hinges exposed, a little bit on the outside and inside, which works in way of design. Going by the videos, the hinge movement appears controlled and snaps shut like it did with flip phones. There is almost zero air gap. The slight hollow in the hinge allows the part of the screen that bends to sit in the hollow.

The crease cannot be totally done away with but Motorola has minimised it to the point that it’s almost invisible. Since most will use the 6.2-inch Flex View display to watch videos, scroll through social media feeds or take photos, any texture or colour takes the eye away from the slight crease.

There is also an external 2.7-inch screen on which you can see notifications, use it as a viewfinder while taking photos, pause/play music and so on. What’s more interesting is the 16MP camera below the external screen. It’s the main camera display and also the external selfie camera, ensuring high-quality snaps. There is also a 5MP selfie camera in the notch of the the main screen but this is more for video calls.

There is the thick chin from the original Motorola design. But it helps a great deal as it houses the fingerprint scanner. Unlocking the main screen is easy or using it for something like Google Pay. It also houses the antennas, Wi-Fi, GPS and vibration modules. And it helps while watching videos on the main screen as one can hold on to it without letting the fingers get in the way of the screen. The speaker is at the base and it also has the USB-C port. Yes, the headphone jack is missing but Motorola says a USB-C-to-headphone adapter will be included in the box the phone ships in. The front and back of the phone appear durable. There are three tactile buttons: power, volume up, volume down.

Being a tall phone which flips shut, it’s easy to keep it in your front or back pocket. The 21:9 dimension allows you to comfortably use the phone using one hand, even opening and closing the device. Also, Motorola has ensured that most apps work from the outside to the inside. There are enough Moto Actions to keep the user happy. According to CNET, shake the phone to switch on the flashlight or turn on a cartoon on the external screen while using the internal screen as a viewfinder, as it would make people look at the camera.

This is something only time will tell as the phone’s spec sheet lists a 2,510-mAh battery, which is smaller than the battery in the Samsung Galaxy S10 or the newer iPhones.

As a tribute, Motorola has included a secret “Retro Razr” mode that turns the $1,499 smartphone into a mirror image of its 2004-era number. The Razr UI has been well thought out as there are buttons for doing all the important functions. To access the mode, visit the quick setting menu. When you go to Edit, there is an option called Retro Razr. Drag it into the quick settings menu and save.

We have already seen the Samsung Galaxy Fold and there is no India release date or pricing (at the time of publication) to the new Moto Razr. But if a recent report in The Information is to be taken seriously, it’s a pair of glasses from Apple that may become the future. According to the publication, Apple plans to release its first augmented reality headset in 2022, followed by a pair of smaller glasses in 2023. The description feels a mix of VR and AR.

But Motorola president Sergio Buniac believes that “foldable is a technology that’s starting”. He told CNET: “We believe there are so many options and avenues with that so we have to think about new consumer segments as we move forward. Of course, those Razr users are an important cluster. But it's equally important to grab new customers as we move forward.”