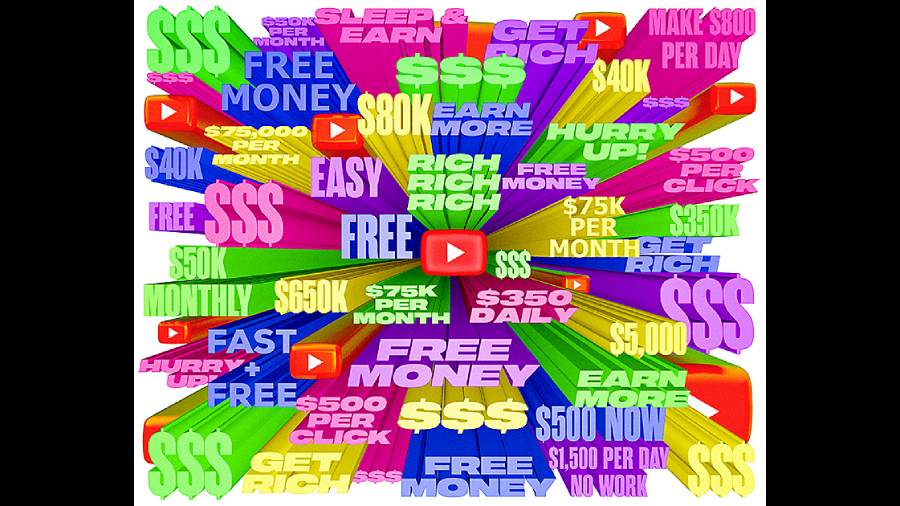 Mitchell, 33, got the idea last year from videos that promoted courses on how to build socalled cash cow channels, which are often created through a process called YouTube automation.

So he bought one course, then another and another. He also paid for mentorship services. Mitchell spent around $15,000 on his YouTube venture, encountering stumbling blocks at every stage — courses that taught him little, freelancers who stole content and audience-growth tactics that got him into trouble with YouTube.

“I’ve tried three courses and one expert on the side, and the only thing I got out of it was an empty wallet,” Mitchell said.

The term “YouTube automation” is a bit of a misnomer. It usually means farming out work to freelancers rather than relying on an automated process. Farming out work allows people to run multiple channels, without the time-consuming tasks of writing scripts, recording voice-overs or editing video. To get started, you just need money — for how-to courses and video producers.

The courses instruct people to find video topics that viewers crave. They are told to hire freelancers from online marketplaces such as Fiverr and Upwork where independent contractors offer to manage their channels. And that’s where many people run into trouble.

Cash cow channels with big audiences can rake in tens of thousands of dollars in monthly ad revenue, while unpopular ones can make nothing. YouTube shares ad revenue with a channel’s owner after a channel gets 1,000 subscribers and 4,000 hours of viewership. Monetised channels get 55 per cent of the money their videos generate — that is, if they manage to scratch out that much interest.

Last summer, Mitchell paid $500 for a course titled “Tube Mastery and Monetization” taught by Matt Par, who said he made $30,000 a month on YouTube.

But Mitchell said the course had gaps — it lacked information on making high-quality videos with good scripts. He also complained that the contents of Par’s course were available for free on his YouTube page.

Mitchell started his first channel, Bounty Lux, about wealth and celebrities, last fall. He paid a freelancer he had found on Fiverr $2,000 for 20 videos. YouTube took down one of those videos, about Dwayne Johnson, that featured content stolen from another channel, prompting a dispute with the freelancer. Bounty Lux did not make money and struggled for viewers, so Mitchell abandoned it.

He later bought a $1,500 course and spent over $3,000 to learn from an influencer at Pivotal Media, Victor Catrina. He paid another $3,000 for Catrina’s team to make videos, but, he said, the ideas and scripts were taken from other channels.

After his freelancer went missing for five days, Mitchell decided to stop investing in the profitless channel. Catrina said that if he ever discovered any of his teams paraphrasing other people’s scripts, he would replace them.

“I’m nowhere near perfect, and neither is the programme,” Catrina said. “And I have openly and happily sent refunds to those who either had financial struggles or considered that the programme was not up to their standards.”

Dave Nick, a Serbian creator whose real name is Dejan Nikolic, has promoted YouTube automation since 2019. Nikolic, 20, appears on camera on three channels, and he said he had four channels with unseen narrators and 12 on YouTube Shorts, a quick-clip competitor to TikTok.

Nikolic said that he made $ 1.4 million in 2021, including for his own how-to courses and services, and that he had already racked up $1 million this year. The key was his $995 course, responsible for 70 per cent of his income.

“Not a lot of people have done more than a couple million a year with YouTube automation,” he said. Online business services is “how you get to eight figures”.

Youri van Hofwegen, a 21-yearold Dutch creator who is known online as Youri Automation, said some people had unrealistic expectations. “They want to pay $200 and make $20,000 by next week,” he said.