Samsung Galaxy Z Fold3 5G is here to redefine how we work, play, and stay connected

Pricey? Yes but as much as the top configuration of an iPhone and at the same time, it’s cheaper than before and as new technology progresses, it will become affordable 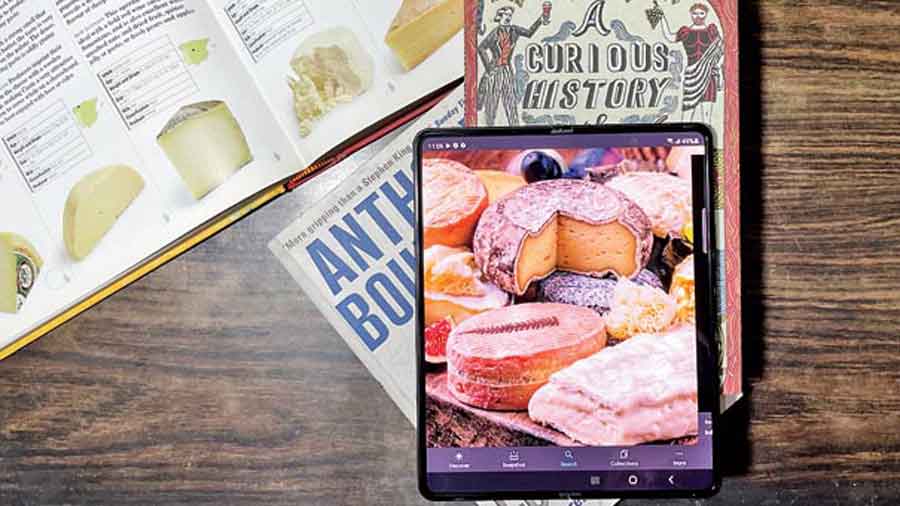 Samsung Galaxy Z Fold3 5G has perfected the folding phone and has opened the gate for a rush of foldable phones.
The Telegraph
Mathures Paul   |   Published 03.09.21, 10:34 PM

Given the choice between slapping diamonds on a smartphone and buying a foldable phone, the choice is obvious — go for the creme de la creme, cream of the crop, upper crust… go for the Samsung Galaxy Z Fold3 5G which wants to become the new normal phone. It makes sense because most flagship (and otherwise!) smartphones at the moment are predictable, so predictable that Ernest Hemingway’s lines about the rich can be thrown around: “The rich ... were dull and they drank too much, or they played too much backgammon. They were dull and they were repetitious.” Yes, smartphones have become repetitious and Galaxy Z Fold3 wants to break that cycle.

Pricey? Yes but as much as the top configuration of an iPhone. At the same time, it’s cheaper than before and as new technology progresses, it will become affordable. The question is what will you buy the Z Fold3 for? To take pictures? To use it as a tablet? To make it come across as a lifestyle device? In the last 10-odd days that we had with the phone, the standard reaction from anybody who saw me unfold the Fold3 has been: “Wow.”

Yes, I did take a lot of photos with it but that’s not the only reason why I would spend a fortune on this phone. It’s about what it can do unfolded. Learning from past lessons, Samsung has devoted a lot of time towards software.

The first big win for me has been the ability to work on two or three apps together on the screen. You can keep apps side-by-side on a split screen or bring three together on the inside display. There is more flexibility to move the apps around without messing up the combination. It is how well the phone handles multitasking that wins brownie points.

Second, apps that haven’t been customised to work for tablets or big windows, can be forced into behaving themselves. There is a Labs feature using which you can make something like Instagram fit the screen ratio that you choose. And it looks stunning. The entire system appears fluid and apps make good use of the full screen.

Third, when you are reading a PDF file, it dazzles. The screen splits into two and you can easily flip pages. This is helpful while reading a book on the big screen. When using Gmail, there are two columns, one to see the mails and the other to see the details of a particular mail.

Fourth, while setting up the phone, I can easily match the outer and inner display app arrangement, meaning I don’t have to set it up twice. Things can be easily mirrored.

Fifth, the phone can handle the S Pen. So there’s support for the stylus that has always been a part of the Note series. But you can’t use any S Pen; you have to buy the ones specifically designed for the Fold. It’s not that Samsung is forcing users to buy another S Pen; the tip of the new iteration is retractable because the display coating is different. Since the review unit didn’t come with the S Pen, we can’t offer our experience with it.

I hear you, what about the hardware? Most of the tasks will be taken care of on the outer screen. Though slightly tall, I didn’t have any issues typing using the outer screen keyboard. You can watch videos, visit social networking sites, yadda yadda yadda.

On unfolding there is a slight crease but you will forget all about it once you start working on the device. It’s as visible as the notch on the iPhone. The great thing is that the phone is water resistant, so you can dunk it in water without worrying. And the frame is sturdier than before while the screen is stronger.

The camera is as good as on the Samsung Galaxy S21. There are three 12MP cameras — main, wide-angle and telephoto. The company has even thrown in OIS, which is great. What will be of more interest is the under-screen inside camera. So there is an outside selfie camera like on any other phone and the other one is on the inside which is under the screen, so you can’t see it... almost. It should be useful for video calls. Anyway, how invisible is this camera? If the screen has dark colours, you won’t notice it but anything white or bright will give a glimpse of the camera. The quality of it is all right but it’s mainly for video calls.

It’s great that the company has thrown in Snapdragon 888 processor, making the phone good enough for longtime usage. Battery life is enough to last a day since users have a mix of outer and inner screen usage.

When the first folding phone appeared it was more of a novelty device. Now it’s become a productivity tool for anyone who needs a big screen. In the last 10 days, I have visited my computer fewer times because I can get everything done on the Fold3.

Even two years ago, calling foldable phones the future of smartphones worked. Samsung has changed that. The future is here. Samsung Galaxy Z Fold3 5G is here to redefine how we work, play, and stay connected.