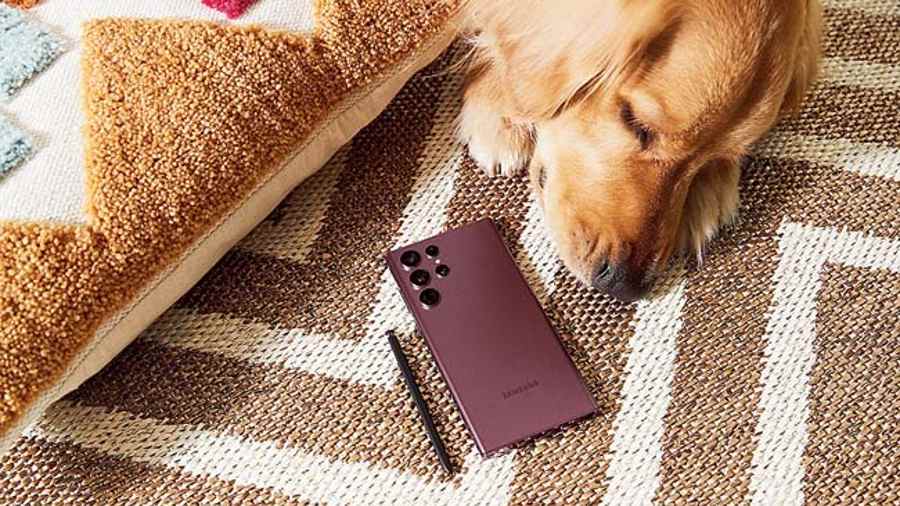 Samsung Galaxy S22 Ultra has been announced and it may turn out to be the most powerful Android smartphone of the year.
Pictures: Samsung
Mathures Paul   |   Published 10.02.22, 01:39 AM

An interesting observation. Lately, some Wall Street analysts have forecast a reduction of corporate travel to the tune of 15 per cent because of videoconferencing but, at the same time, they have pointed out that top-dollar deals will require face-to-face meetings. Second, as vaccination rollout continues, one can hope there will be some semblance of normalcy in the coming months. Third, as and when office-goers return, business will be brisk across the retail spectrum, including smartphones.

After two years of surviving on budget phones, there is once again a demand for premium phones, and the winners in this segment are clear — Samsung and Apple, two global companies that have managed to navigate chip shortage issues better than others, especially in the flagship categories, thanks to their management of the supply chain.

And that brings us to one of the most interesting launches from Samsung in a couple of years. A few clear messages are being sent out by the South Korean company with the introduction of its latest Galaxy S series called Galaxy S22 — includes S22 Ultra, S22+ and S22 — and the Galaxy Tab S8 series. The focus has been on streamlining the flagship category and at the same time handling many of the flaws that one associates with Android phones. Helping the cause is the hope that 5G spectrum auction will take place by August, followed by a rollout. The timing of the new phones appears spot on.

Always willing to innovate, Samsung is going big on the camera front not just with pixel count of 108MP on the Ultra, accompanied by a 12MP ultra-wide, there will be two 10MP telephoto snappers with 3X and 10X optical zoom, which is a big deal. A rough difference between the two is that with optical zoom, the camera first gets the subject close before capturing it and with digital zoom, your camera uses part of the image and later brings it to the correct size, meaning a loss in quality.

This, of course, is not enough. Most phone cameras do a miserable job at capturing the night by either throwing in too much noise or simply killing most details. To tackle the situation, Samsung has Nightography. The pixels on the S22 ultra are 1.23 times larger than on the S21 Ultra. The bigger, higher resolution sensor combined with multi-frame processing technology blends multi-exposure frames for what is expected to turn out among the best in night photography. Enhanced AI high-resolution technology will be able to process four times more data to sharpen details of images.

Helping turn up processing power across departments is the up to two-times faster NPU or Neural Processing Unit, which recognises what’s in your photo, prompt the camera to adjust to the ideal settings for the subject and create bokeh effects. Enhanced image sensors also give way to better HDR functions. Thanks to a new Adaptive Pixel technology, there is less chance of you having to sacrifice quality even in low light.

Differences are also coming in the way video gets shot, which is usually a problem on most Android phones. The iPhone has taken the process of capturing videos to the point that you won’t ever finish a project with a missed frame.  Samsung has arrived.

From what we gather from the company, one of the differentiating features is coming in the form of auto framing or the ability to detect people within five metres and the camera can track up to 10 people, in order to have subjects in one frame. So it gives you the power to make your videos more dynamic than ever and effortlessly get that group shot. You can also adjust the auto framing and tracking shot to suit any situation.

If you are a professional photographer, you will have full control over your camera settings in the Pro Mode and downloadable Expert RAW application. This allows you to customise settings and save 16-bit RAW files for further editing.

The big-hitting camera features are also present on the selfie camera. Galaxy S22 series can detect when you are shooting in low light and will automatically switch to portrait mode to capture crisp, clear photos even in the dark. Night portrait mode even works on the front-facing camera, using a deep learning technique powered by a new NPU to improve processing of noisy, dark pictures into bright, clear shots. Portrait mode will also work on pets.

We keep hearing about 10nm, 7nm… processors. ‘Nm’ refers to nanometers and it denotes the size of the small transistors that the CPU is made up of, and the distance between these transistors. What we will get on the Ultra is a 4nm processor that will translate into enhanced security, enhanced NPU and enhancements in the AI camera system. Make no mistake, these will be among the fastest phones to appear in 2022. Though we are unsure of the variants that will be available in India, the top model will feature 12GB RAM and a whooping 1TB space.

The biggest difference between the Ultra and the rest of the Galaxy S22 series is the support for S-Pen on the former. The S-Pen is that one tool that a large number of Samsung users look forward to. Last year, Samsung allowed the S-Pen to be used with the Galaxy S21 Ultra but there was no built-in pouch to hold it… that changes this year.

The meaning goes deeper. Till 2020 we have had the lifestyle-centric Galaxy S phones appearing in February while the Galaxy Note appeared in August. Though Samsung is not saying it but it feels like the Galaxy S22 Ultra is the new Note. Be it design or productivity features, it has the makings of the Note. It makes a lot of sense because now Samsung can free up the August slot for its other category of phones that is reshaping business — foldables.

Tablet with many choices (and LumaFusion)

Nobody expected the company to come up with three tablets. It has — Tab S8, Tab S8+ and Tab S8 Ultra, which will have the first 4nm processor in a Galaxy tablet. Coming with up to 16GB RAM and 512GB storage (besides support for microSD) on the Ultra, all your needs will be taken care of.

And at 14.6-inches of Super AMOLED goodness (120Hz display refresh rate), it is the biggest tablet from Samsung, complete with an 11,200mAh battery. Things don’t end there. There is a notch on the front that houses two 12MP snappers to get the maximum number of people in the frame because tablets are used as work-from-home devices.

For the first time, you will be able to turn your smartphone into a palette. Being in the Samsung ecosystem, you can use the Tab S8 Ultra as a canvas to draw on while all the functions can be controlled using by syncing it with the S22 Ultra. One more thing. LumaFusion is coming to Galaxy. The powerful video editing tool will first get featured in the Samsung “galaxy”.

A game plan that has been in the works

Xiaomi is busy promoting charging speeds. OnePlus is busy setting its house in order. Google is not serious about Pixel in markets like India. Realme is busy talking only about 5G. Samsung, on the other hand, has been quietly doing something others are not — giving software and security updates often. It’s a massive change from, say, a year ago. This means, you will have the latest software running the show and constant security patches. Add to this phones that are pretty much top of the line and have everything except the kitchen sink thrown in. Creme de la creme? Of course. The perfect smartphone for pandemic-under-control world? Looks like the new Galaxy S22 series may hit the jackpot.