Samsung Galaxy Note10+ can become the hub of our productive lives

Here's the review after experiencing the device 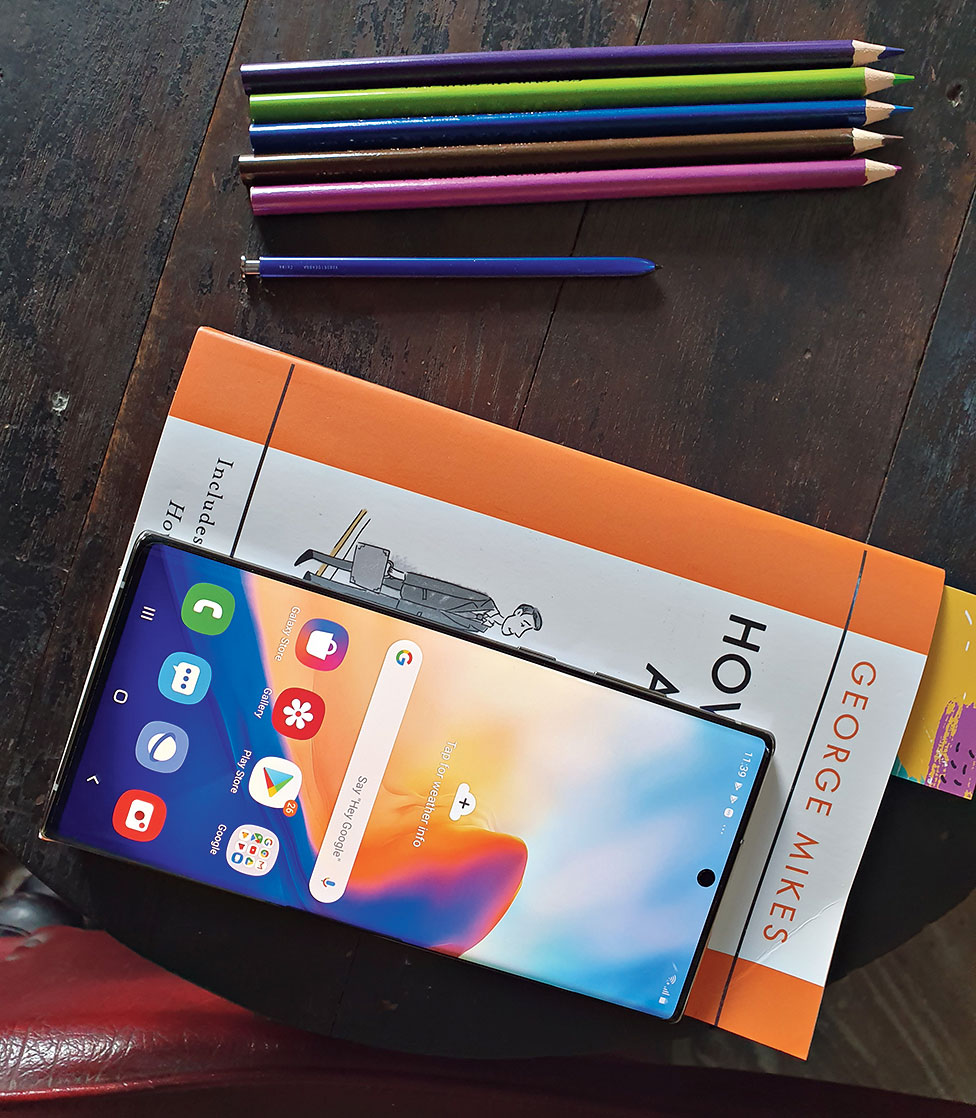 Galaxy Note has always been a genre-bender and what Samsung has done this time is make it a hub of our productive lives. It certainly delivers a big punch.
Picture: The Telegraph
Mathures Paul   |     |   Published 26.08.19, 04:56 PM

My childhood record collection: Born In The USA, The Works, Every Picture Tells a Story, A Nod Is As Good As a Wink... To A Blind Horse, Blood on the Tracks and also thrown into the mix were a few Carpenters and Kris Kristofferson albums. What I called a varied collection was labelled “modern” by my grandfather. Eventually he ended up presenting Boney M’s Oceans of Fantasy on my 12th birthday because it was “modern”.

We see the same problem in the world of smartphones. If someone likes smartphones, it doesn’t mean that he or she can be gifted just any smartphone. Yes, flagship chipsets for 2019 are roughly the same and photography on these phones is great though not similar. Yes, the colours must pop, user interface needs to be smooth and videos need to come out steady but the one feature that works for me and is magical, it’s the stylus, which Samsung calls the S Pen. And the question that needs an answer: How badly does one need the S Pen in 2019?

t2 took the Galaxy Note10+ through the paces over a week and here’s how it went.

The write way with the S Pen

If paper reminds us we are physical beings in a virtual world, the stylus makes us think about the correct words to put down and to think twice about what we say. The S Pen has gained plenty of tricks on the new Note, and not all of them are gimmicky.

With the addition of a gyroscope and an accelerometer to the S Pen, it has now become more of a magic wand, which allows the hardware to determine the direction it is being moved and that in turn brings us to a new set of features called Air Actions. Now you can change camera modes simply by swiping the stylus in the air while pressing down the button on it or zoom in an out by making a circular motion.

The first efforts at using Air Actions attracted questions like: ‘Are you trying to get rid of me’ (from the wife), ‘Have you finally lost it’ (from my best friend) and ‘Do you want the bill’ (from the waiter at the restaurant). Well, all three of them were ultimately pleasantly surprised by the S Pen. It’s a neat feature that can be added to many apps. Just don’t hold down the button indefinitely... only when you are making the motion.

Next came the AR Doodle, which is fun and one is surprised by how well it works. Turn on the video mode, focus on a face and select the squidgy icon on the top-right. Draw anything around the person and it moves with the object. Even more enticing is the ‘Everywhere’ mode in the doodle function. It lets you draw volumetric doodles in space and they stay where you draw them. It’s mind-blowing.

But are you going to use these features all the time? No. And that’s why there is much more — and in abundance — to the S Pen.

You can scribble down Notes without turning on the phone and these handwritten notes are searchable and you can extract the text out of them, even if one’s handwriting is garbage like mine. The same can be transferred to text file or MS Word format, which is godsend because meetings call for page after page of writing and the Note becomes a biggish notepad.

Of course, one swallow does not a summer make. A drawback one is often faced with is editing videos on the smartphone. It’s just not perfect. The S Pen shines and makes the built-in video editing tool shine. Putting clips together becomes a lot easier and precise with the stylus, complete with basic transitions, backing music, sniping and effects.

And one more use case: Take a screenshot and use the stylus to make annotations or highlight edits. Darn useful for office work.

DeX, the ability to turn your monitor and keyboard into a computer when connected to the Note, has always sounded good in theory but till last year, it was more good on paper than in the real world. DeX just got easier because you can now tether the Note10+ to your computer using the same USB-C cable that charges your phone. And this works on both Windows-based PCs and Macs.

My PC runs on Windows 10 and I was able to browse the Note10+ photo gallery, scroll the mobile version of Instagram and also send/receive SMS… all from the desktop. Samsung has partnered with Microsoft to bring in more features. Later this year, Windows will enable you to make/receive calls as well, directly from your PC. Microsoft has also partnered with Samsung to bring deeply-integrated productive experiences with OneDrive and Outlook.

There are so many productivity features packed into the phone that the camera has been reduced to the “other” thing. The cameras remain almost unchanged from the Galaxy S10+, which is a good thing. At the same time, the Note10+ has become the best Android phone for taking videos. Now there is live focus in videos, meaning you can blur out the background; yes, a depth-sensing camera is here. And video stablisation has been improved a great deal. Though you can capture great slow-motion videos of a bird flapping its wings, the one feature we are kicked about is the audio zoom-in feature. While shooting a video, you can zoom in and there is a perceptible change in the audio level. The feature works better with unmoving objects. And depth camera also allows you measure the size of things and scan 3D objects.

Added to the combination of an ultrawide 16MP camera, another 12MP wide-angle camera, a 12MP telephoto and a depth-sensing camera, is a whole lot of AI. For example, hit the beach and you be suggested a wide-angle photo.

The Note10+ packs a killer 6.8-inch screen, which is the best in the industry while the Note10 has a 6.3-inch screen. The Note10+ has an iridescent skin and a glass-coated reflective back. You can inject a few millilitres of jealousy into people around you and also check if there are lipstick smudges on your teeth! The problem is, you need to put a back cover to this expensive device.

Though the screen sounds big (it is big!) but the size (and weight) of the phone remains almost unchanged. The angular design lends gravity and at 198g, the phone has a great balance. And true, the 3.5mm headphone jack is missing but we will get over it as the world moves towards wireless headphones.

A quibble: Was there a need to move the power button to the left? If one is to take a screenshot using the power-volume down button combination, things can get difficult. Better use the S Pen to do the same.

We are also impressed with the 4,300mAh battery, which, frankly, is enough to last you close to one-and-a-half-days and certainly a lot more than just a day if Angry Birds is on the mind. Charging happens at the blink of an eye with the included 25W charger or if you purchase Samsung’s 45W charger separately. In way of speed, there are zero complains as the phone comes with a 7nm processor and monstrous 12GB RAM.

The latest in wizardry — like always — comes at a price (Note10 is priced Rs 69,999 and Note10+, upwards of Rs 79,999) but it also comes at an important moment… when critics are asking ‘what more can a smartphone do?’ As a device, the Galaxy Note has always been a genre-bender and what Samsung has done this time is make it a hub of our productive lives. It certainly delivers a big punch.