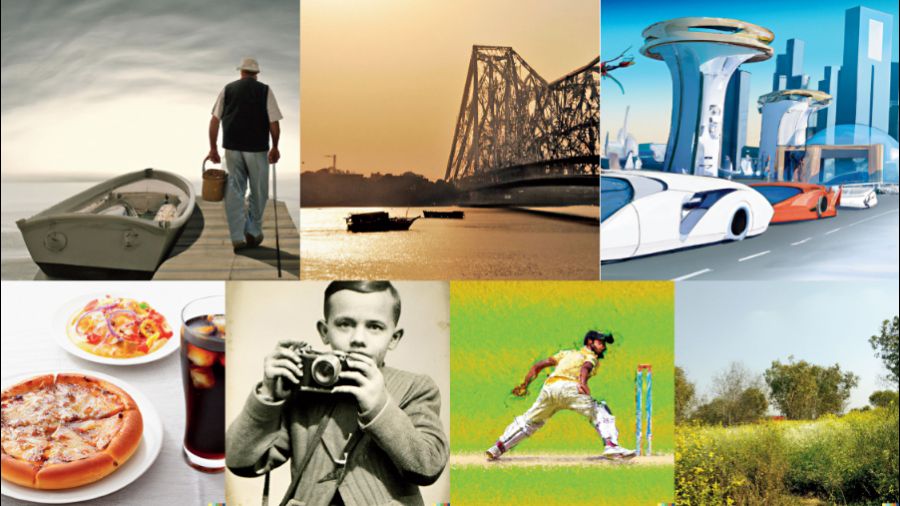 A few weeks ago, Microsoft announced it was bringing an AI service — via OpenAI, an artificial intelligence research outfit — to Microsoft 365, the company’s popular software suite. To bring OpenAI’s DALL-E 2 AI technology alive, a new component is being added to the Office package called Microsoft Designer. (OpenAI is backed by a billion dollars in funding from Microsoft; to get started with the Microsoft Designer app, you can sign up for early access to a free web preview of the app.)

It is the future of clipart and stock images. A simple explanation of what the app that’s powered by DALL-E 2 AI technology can do is create a number of complex designs just by typing in what you want. “Cat having milk”, “man jogging in the park”, “picture of cars in the future”, “kite flying in the sky”, “pizza and cola”, “vintage photograph of boy with camera”, “watching television with family”, “going fishing”, “office hours”… there is no limit to what can be created using the technology. The “art” that’s generated can be used for greeting cards, social media posts, posters, logos for businesses, the list is endless.

OpenAI, the company behind DALL-E (a nod to the 2008 animated movie WALL-E about an autonomous robot, and Salvador Dalí, the surrealist painter), has inspired the birth of several text-to-image generators, each with varying degrees of success, like Stable Diffusion and Midjourney, which has created a mini storm when an image generated by it — titled ‘Theatre d’Opera Spatial’ (by Jason Allen) — won in the ‘Digital Arts / Digitally-Manipulated Photography’ category at the Colorado State Fair Image in August. Or take the example of AI art that sold at Christie’s New York in 2018. A portrait produced by AI — ‘Edmond de Belamy, from La Famille de Belamy’ by the French art collective Obvious — sold for $432,500 and Generative Adversarial Networks was used to create it. In May, The Atlantic magazine carried an article titled ‘Where does Alex Jones go from here?” that kicked off with a brilliant illustration. Read the caption carefully and you will find “AI art by Midjourney”.

Google is working on its own technology in the form of Imagen. Meta’s researchers have made a significant jump with Make-A-Video, which involves making a video out of a text prompt.

These are new applications, yet their popularity has been unprecedented. DALL-E 2, for example, has more than 1.5 million users generating more than two million images every day, while Midjourney’s official Discord server has more than three million members.

For at least five-six years, AI labs have been working on systems that could identify objects in digital images and even generate images on their own, like flowers, dogs, cars and faces. Next, systems were built that could achieve the same with written language, summarising articles, answering questions and even writing blog posts. The technologies have been combined to create the new form of AI. It uses something like a neural network that learns skills by analysing large amounts of data. By training to pinpoint patterns in a million photos of an avocado, it can learn to recognise an avocado.

Unlike something like the metaverse or NFTs, generative AI apps have enough users to justify the hype around it

If the AI system is asked to create an image of an avocado next to a trumpet, it will generate images that include key features it has learned during training. Next, another neural network called a diffusion model creates the image and generates the pixels needed to realise these features. Everything happens in a matter of seconds. DALL-E 2 has reportedly trained on more than 650 million images and their descriptive captions.

Unlike something like the metaverse or NFTs, generative AI apps have enough users to justify the hype around it. One company to look out for is StabilityAI, which is behind Stable Diffusion. While other AI projects guard the techniques that are used, Stable Diffusion is open-source and free to use, in other words, anyone can view the code or download it and run a modified version on a personal computer. London- and San Francisco–based Stability AI is the brainchild of CEO Emad Mostaque, a graduate from Oxford with a master’s in mathematics and computer science. The open source version of Stable Diffusion has been downloaded more than 200,000 times since it was released in August while millions of images have been created using tools built on top of Stable Diffusion’s algorithm. The freedom that Stable Diffusion offers has also attracted concern over how AI can be used to deliver misinformation.

Of course, all this points to the question whether AI-generated images can be considered art. There’s no easy answer to it or about the copyright angle.

AI-generated art is being criticised as automated plagiarism since the technology relies on millions of art pieces that it has trained on. It is possible to take an AI-generated image, run it through something like Adobe Photoshop to make additions/subtractions, like a lock of hair on a bald head, removing some visual elements, to get an image out of fantasy land.

What companies can do is have checks in place to avoid misuse. For example, DALL-E includes built-in safeguards that stop users from generating fake images of celebrities or politicians.

For most, the first encounter with AI-generated images will be in the form of memes on social media. Those who are not artistically gifted will take the help of technology to create memes but then things will start getting more complicated.

What happens to the livelihoods of artistes and designers in the near future? An easy (happy) answer is that artists won’t have to worry about creating mundane pictures, allowing them to focus on creative projects. Sadly, it’s not that simple. Sure, the camera didn’t kill painting. But over the years and decades AI tools will improve, become cheaper and, of course, more accessible until they become a part of our daily lives. Expect to see controversies around copyright and payment to creators of original artworks.

The AI-generated portrait ‘Edmond De Belamy, from La Famille de Belamy’ was exhibited in London before it was auctioned for $432,500 in New York in 2018.
Picture: Obvious Collective/Christie’s

BBC reported what professor Lionel Bently, director of the Centre for Intellectual Property and Information Law at Cambridge University, had to say about copyright infringement around AI-generated art and he said in the UK “it’s not an infringement of copyright, in general, to use the style of somebody else”. He said an artist would need to show that output of an AI had reproduced a significant part of their original creative expression in a particular piece of their art used to train the AI. Perhaps the same will hold true in other countries.

Getty Images has already banned (as there are concerns with respect to the copyright of outputs from AI models) the upload and sale of illustrations generated using AI art tools like DALL-E, Midjourney, and Stable Diffusion. Similar decisions have been taken by sites Newgrounds, PurplePort, and FurAffinity.

The AI genie is out of the bottle. It’s impossible to put it back in. So the best we can do is look at the genie and try to control how it functions.

It remains to be seen whether Jason Allen (whose AI-driven work won a prize at Colorado State Fair’s annual art competition) will have the last word in the matter. He told The New York Times: “This isn’t going to stop… Art is dead, dude. It’s over. AI won. Humans lost.”

But let’s not also forget that AI requires the work of humans to learn and find visual cues. It is what we upload online that is being used by companies to train AI engines. Humans made AI and hopefully we have enough willpower (and power) to pull the plug on it.