One size fits all

Explaining what the EU’s universal charger mandate means for us 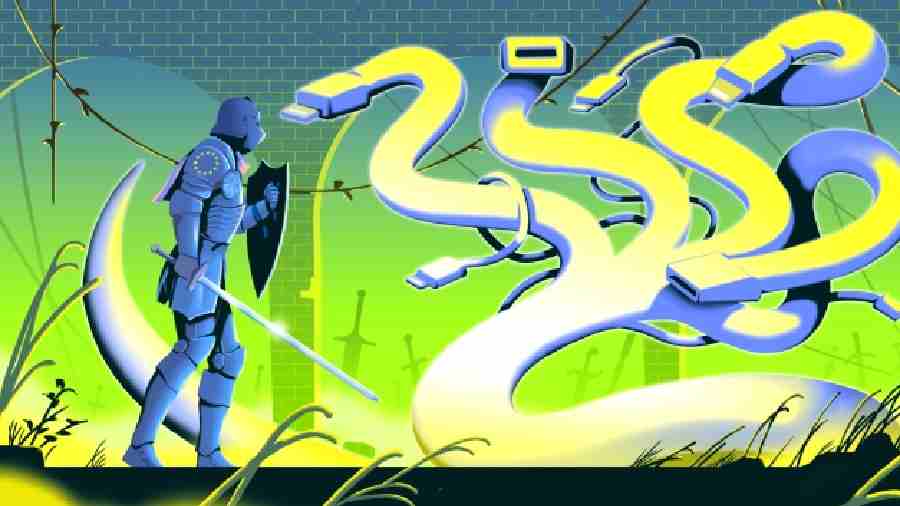 Most of us own multiple types of chargers to replenish our devices. That’s because many products, like Apple phones and Microsoft Surface computers, are plugged in with wires that use unique connectors.

Soon, that may no longer be the case. The European Union recently announced a mandate that will require all new portable devices like smartphones, earbuds and wireless keyboards to use a common charger by 2024. Two years later, the rules will apply to new laptops.

Although the law will be enforced throughout Europe, it might affect consumers worldwide. That’s because it will most likely be costly for tech companies to make products with different charging technology only for European countries.

The legislation, which regulators say will reduce e-waste, appears targeted at Apple, whose iPhones, iPads and Macs use an array of charging technologies.

The long story short is that no matter where you live, most devices you buy in the coming years will probably include a charging port known as USB-C. The shift may be a frustrating transition for many, perhaps most acutely for iPhone customers who have collected wires and accessories using Apple’s proprietary lightning connector since its introduction a decade ago.

Here’s what you can do to help to prepare for this transition.

First, let’s talk about USB-C. It’s that oval connector that works with many Android phones and laptops. It’s not the same as Apple’s flat rectangular lightning connector or the bulky USB rectangular connector, which is an older technology called USB-A.

The European law requires all devices to use USB-C by 2026. So we will need to plan accordingly to incorporate that connector into the products we use to recharge our devices.

When buying a power brick that hooks up to your computer or phone via a wire, make sure to get one with the oval USB-C port. That will allow it to accept a USB-C power cable, which will plug into your future phone or computer.

Many Android phones and computers already use USB-C power cables — so continue to buy those if you need to. But let’s say you use Apple phones, which use the lightning connector. If your wired lightning charger breaks, it will still make sense to buy a replacement cable because those wires are relatively inexpensive. The safest bet is to buy a lightning cable with a USB-C connector on the other end.

Another option is to go wireless, said John Bumstead, owner of RDKL Incorporated, which sells refurbished Apple hardware. Most modern smartphones work with a newer wireless charging technology known as magnetic induction, which uses an electrical current to generate a magnetic field and create voltage that powers your device without plugging a wire into it.

Wireless chargers come in many shapes and forms, including mats and docks. Because they do not need to be plugged into a port on your phone, now is an opportune time to consider wireless chargers.

A trickier conundrum concerns buying accessories like keyboards and mice, Bumstead said. It would be wise to wait a couple of years for future versions of those products, he added. That’s because once the USB-C mandate takes effect, it will be a hassle to carry a USB-C cable for your phone and computer and a lightning cable for your keyboard or mouse. It will be more convenient to carry one cable that charges everything.

Still, when everything uses the same type of connector in a few years, it won’t mean you’ll have to discard your devices that use proprietary connections. One option is to buy an adapter, like a dongle that allows a lightning connector to accept a USB-C connection. That way, if you have just one device that uses a lightning connector, you can use the dongle to continue to plug in that device with a USB-C cable.

Dongles are an inelegant solution, though; you’re better off not buying accessories with proprietary connections. Opt for those that come with USB-C ports.

With some forethought, this transition won’t be so bad. USB-C is a solid technology allowing devices to be replenished quickly. And because so many products already use a USB-C connector, most of us already own plenty of these cables, said Jeff Ravencraft, the president of the USB Implementers Forum, a standards organisation working with companies including Apple, HP and Microsoft to develop USB technology.

“This train has already left the station,” Ravencraft said.