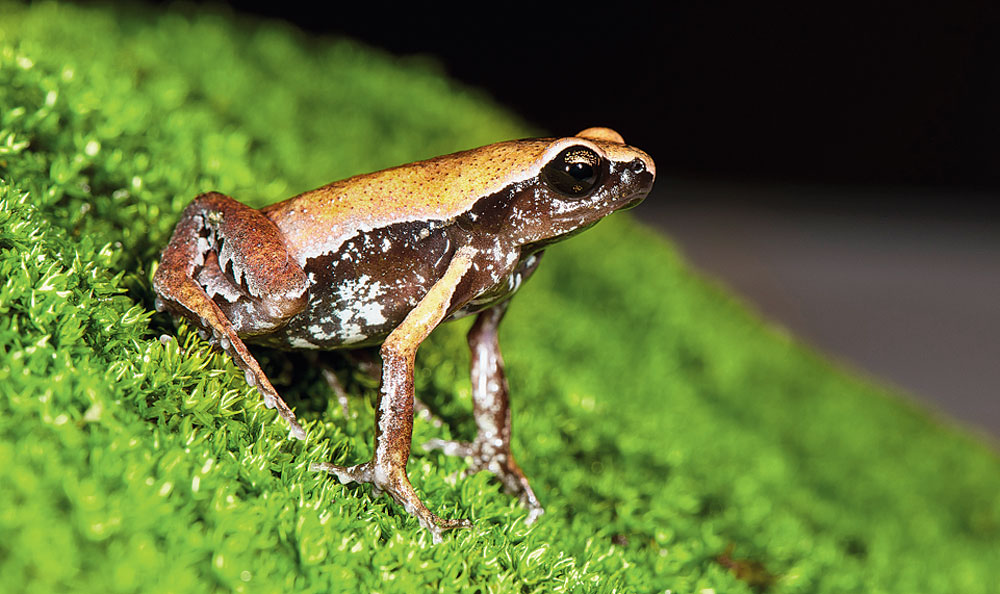 Two zoologists on Wednesday announced their discovery of a mysterious frog previously unknown to science in roadside puddles near Wayanad, Kerala, that they say could add fresh insights into India’s geological history.

Sonali Garg and Sathyabama Das Biju have found a new species of a narrow-mouthed frog that emerges for less than four days during the monsoon for breeding and disappears for the rest of the year into a habitat still unidentified.

The scientists have named the species Mysticellus franki and proposed a common name of “mysterious narrow-mouthed frog”, citing its extremely short breeding season and subsequent puzzling long absence. They have published their discovery in the journal Scientific Reports.

Biju, a professor of environmental sciences, has been studying frogs on the Indian subcontinent for over two decades and, along with Garg and other scholars, added over 90 frog species into the global catalogue of amphibians.

But during a routine field survey, Garg spotted tadpoles in puddles of water that she thought looked strange. “Their tales and mouths looked different,” she said. Genetic studies revealed that the tadpoles appeared different from species already in the catalogue.

The researchers returned to the field and waited months surveying forests, urban and rural areas until in 2015 — after two spells of heavy rainfall — they spotted over 200 frogs on grass blades near a rainwater puddle.

Over the four days the frogs were visible, the scientists noted they had an insect-like long call, a buzz-like sound typically lasting 1.7 seconds that males use to draw females. The frog has two black spots — resembling “false eyes” — on the lower back. The researchers believe the frogs use the spot in defensive displays against predators.

Genetic studies suggest that the frog’s nearest close relatives, also belonging to the family called microhylidae, are found in Southeast Asia — and the two branches diverged on the amphibian evolutionary tree about 40 million years ago.

The scientists say its close links with Southeast Asian frogs bolsters evidence for the idea that species may have had “one or more” opportunities to disperse between India and Southeast Asia before India’s collision with Tibet and their subsequent dispersals.

Most geologists believe India, after separating from Madagascar about 90 million years ago, drifted northward as an island continent until its collision with Tibet about 55 million years ago. The collision opened the Tibet-Himalayan route for animal dispersals.

“Our discovery supports the idea of early land connections between India and Southeast Asia before the India-Tibet collision,” said Biju.