India's space missions are not about scientific endeavour

They are more about technology demonstration and national pride 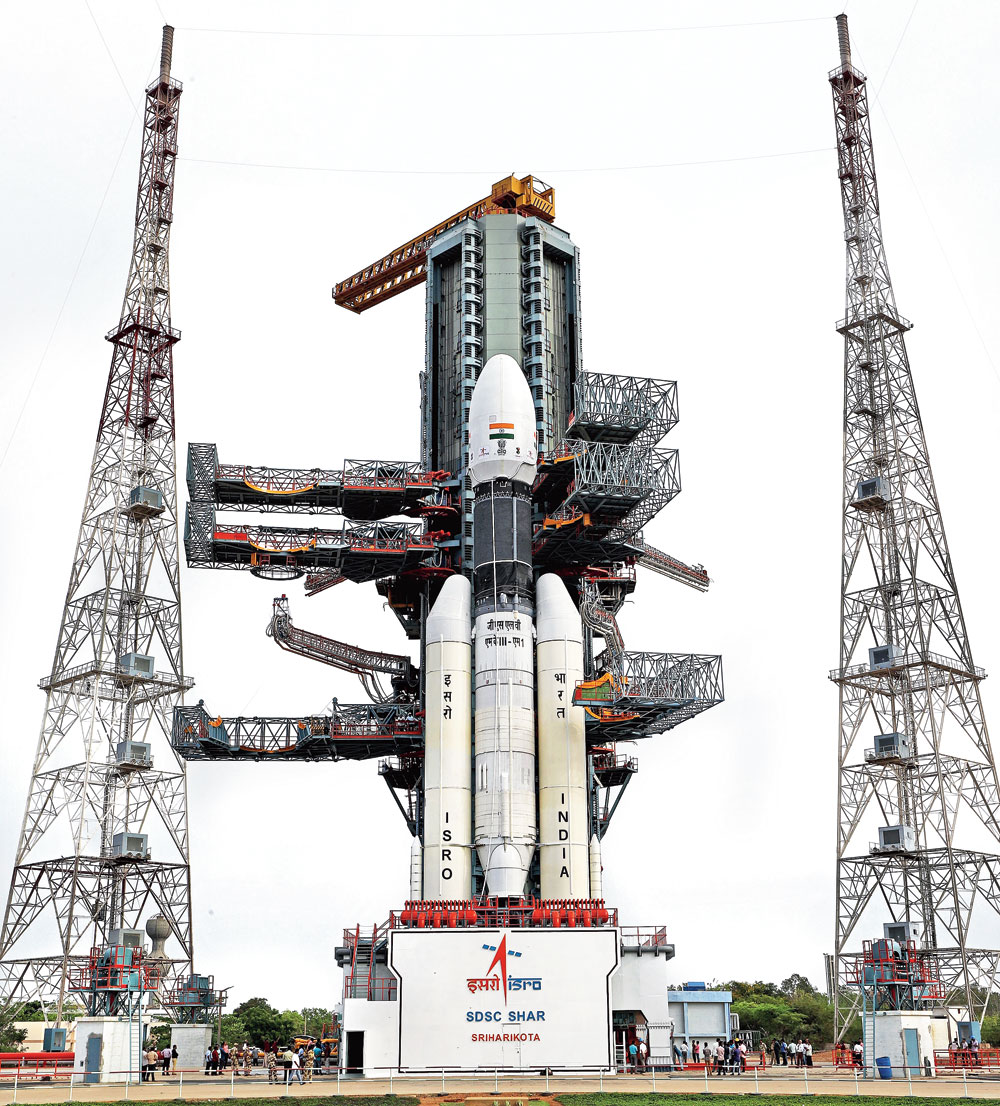 If everything goes to plan, India’s ambitious Chandrayaan 2 lunar mission has already taken off. And, three months after the launch, a lander and a rover stacked in the rocket will land gently near the South Pole of the Moon. According to the Indian Space Research Organisation (ISRO), India’s second moon mission — Chandrayaan 1 was launched in October 2008 — consists of an orbiter, a lander and a rover.

The orbiter is supposed to observe the moon’s surface and relay communication between Earth and Chandrayaan 2’s lander. Its scientific payloads include a high-resolution camera, a synthetic aperture radar, a solar X-ray monitor as well as other sophisticated instruments that will map the lunar surface. The lander, called Vikram in honour of space scientist Vikram Sarabhai, will stack the rover — a six-wheeled vehicle named Pragyan — along with scientific instruments that include a camera, a seismometer and a thermal profiler.

These payloads will provide information on moonquakes, the temperature and thermal conductivity of the moon surface. Pragyan will use a range of cameras to analyse the chemical composition of the lunar surface. All the instruments are indigenous, except a retroreflector array— a sophisticated mirror — provided by the US space agency Nasa. This will help scientists determine the position of the lander on the Moon and precisely calculate its distance from Earth. The powerful launcher or rocket, GSLV Mk-III, is capable of lofting 4-tonne satellites and has been both designed and fabricated in the country.

Isro states that Chandrayaan 2 is a lunar mission “that will boldly go where no country has ever gone before — the Moon’s south polar region”. The target area of the lander and rover is about 600km from the pole — the first time any mission will land so far from the lunar equator. “The indigenously built lander’s attempt at soft landing on the Moon will be a tough test. If successful, India will become the fourth country [after the US, Russia and China] to carry out such a landing,” says Sandip Chakrabarti, director, Indian Centre for Space Physics (ICSP) in Calcutta. According to Chakrabarti, who worked at Nasa early in his life, a soft landing on the regolith or surface of the Moon is crucial. Otherwise, the attempt might create a huge dust storm that can take many days to settle and the lander can sink in layers of dust. Recently the Israeli spacecraft Beresheet crashed during its attempted landing on the Moon.

Fifty years ago this month, Neil Armstrong took that historic step on the moon. In those days, lunar exploration had a geopolitical rather than scientific motive; it was primarily a race between the US and the Soviet Union to dominate space exploration.

Why is there a sudden resurgence in lunar exploration by so many nations (US, China, Japan, Israel, Korea and Europe) including India? Isro states: The Moon is the closest cosmic body at which space discovery can be attempted and documented. It is also a promising test bed to demonstrate technologies required for deep-space missions.

According to A.R. Rao, professor of astronomy and astrophysics, Tata Institute of Fundamental Research, Mumbai, the aim of Chandrayaan 2 is to “build and enhance the brand of Isro in the public eye”. He iterates that it’s supposed to “enhance India’s esteem in the world”.

Says Jayant Murthy, senior professor at the Indian Institute of Astrophysics in Bangalore, “The overall cost is small for a large country like India. This is a developmental project intended to demonstrate capability of new technology.”

Isro claims that Chandrayaan 2 is an “attempt to foster a new age of discovery, increase our understanding of space, stimulate the advancement of technology, promote global alliances, and inspire a future generation of explorers and scientists”. The question is: Will it really help research by Indian space scientists? Indian space missions are actually all about technology demonstration and boosting national prestige. Says Murthy, “We have always placed actual science at the bottom of the heap. Projects are done for other reasons — which are important — and the science is shoehorned in at the end. Chandrayaan 2 will do useful science but the scientific return would have been much greater if we had an active lunar science community and they had been involved from the beginning.”

Chakrabarti of ICSP, however, is sceptical about scientific gains for India. According to him, the most significant achievement of Chandrayaan 1 was the detection of evidence of water on the Moon. “This was primarily done by the Moon Mineralogy Mapper (M3), an instrument provided by Nasa. Even though the data was right under our nose, a team of Nasa scientists found the definitive evidence of frozen water on the Moon’s surface.” According to him, this time too the Nasa instrument is most crucial and it will benefit the US agency more than India. “This will eventually help Nasa firm up their plan to land astronauts on the lunar South Pole by 2024,” he says.

During his stint at Nasa, he’d seen how scientists and engineers play an equal role in space missions. Chakrabarti laments that Isro projects are run by technocrats and engineers, scientists are secondary. “Pan-Indian scientific research institutes should be involved in the country’s space projects if India wants to stay ahead in the space race,” he signs off.