Advertisement
Home / Science-tech / How many space stations does this planet need?

How many space stations does this planet need?

Now, the International Space Station (ISS) is the only place where people live away from Earth 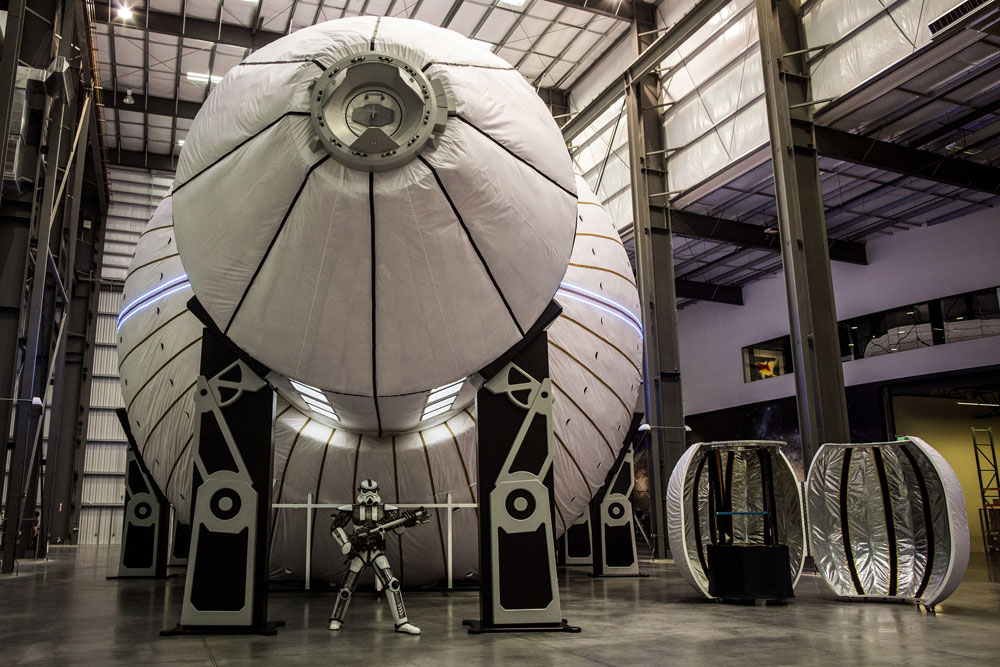 SKY HIGH: A model of the Olympus space station. The module can be packed into a rocket and unfurled in space, creating a more luxurious living area than the cramped ISS
Sourced by The Telegraph
Kenneth Chang/ NYTNS   |     |   Published 29.10.18, 05:13 AM

At one end of Bigelow Aerospace’s factory is a mock-up of a gargantuan home for future astronauts. With a unique design — it could be packed into a rocket, then unfurled in space — it would comfortably house a dozen people as a space station or serve as a building block of a moon base.

“It’ll be a monster spacecraft by any current standards,” said Robert T. Bigelow, the company’s namesake founder, at a news conference in February. This is Olympus, named after the mythological home of the Greek gods and a measure of Bigelow’s ambitions for building settlements in space.

Farther down the factory floor is a long, skinny metal structure. This is a developmental version of the spine of a more modest B330 module, which the company actually plans to build. Slight in appearance compared to Olympus, it would still be much less cramped than the metal cans that make up the International Space Station.

Bigelow says he is committed to having two B330s ready to launch in 2021, a step that could be a harbinger of the shift from a half-century of human spaceflight as a monopoly of government-run agencies like Nasa to a capitalistic free-for-all. The Trump administration wants to accelerate that transition by ending direct federal financing of the space station after 2024.

“We also want numerous providers that are competing on cost and innovation,” Jim Bridenstine, the Nasa administrator, said recently. If commercial stations prove cheaper to operate, Nasa will have more money to pursue other goals, like sending astronauts to the moon and Mars, Bridenstine said.

But betting hundreds of millions of dollars on businesses that do not yet exist could turn out to be quick way to lose a fortune. And space travel remains a dangerous avocation that could kill some people who make the trip. Bigelow conceded that he is not certain that he will be able to find customers for his B330s. If there is no market, “then we would pause,” he said.

Today, the International Space Station (ISS) is the only place where people — no more than six at a time — live away from Earth. It is a technological tour de force and the most expensive thing humanity has ever built. The 15 nations involved, led by the US and Russia, have spent more than $100 billion over two decades. The US spends $3 billion to $4 billion each year.

Continuously occupied for nearly 18 years, the ISS serves as a test bed for studying long-term effects of radiation and weightlessness on astronauts. Nasa has become proficient at running it, largely eliminating breakdowns like clogged toilets, balky cooling systems and crashing computers. Perhaps most remarkable, life on the ISS has become unremarkable: it is a home office, albeit one more than 200 miles up and travelling at 17,000 mph, where astronauts work, eat, sleep, exercise, check on experiments, perform chores. Only occasionally does the crew perform activities, like a spacewalk, that truly seem out of this world.

The possibility of retiring the ISS, part of the administration’s budget request, startled many. Companies like Bigelow are years from launching their space stations, and such expensive, cutting-edge projects often slip behind schedule. Critics worry that the ISS might be discarded before its successors are ready. A gap without space stations would disrupt Nasa’s studies, as well as emerging commercial endeavours. Nouveau space station companies could go belly up if the hoped-for customers are slow to show up.

Two decades ago, there was a commercial space station for a brief time. It was Russian, and an American named Jeffrey Manber ran it. Perhaps it could have succeeded — but Nasa killed it.

After the breakup of the Soviet Union, the Russian space programme was strapped for money and willing to consider ideas that might have seemed crazy for an ex-Communist country. Mir, the Russian space station, was seen as ramshackle and dated, about to be replaced by the bigger, better ISS.

But Manber and other US entrepreneurs saw Mir more as a fixer-upper. Energia, Mir’s manufacturer, agreed to partner with the Americans to create MirCorp, a commercial venture that leased the station from Russia. But the Russians yielded to Nasa’s insistence on dumping Mir, which was nudged into the Pacific in 2001.

Today, Manber has carved out a successful niche as chief executive of NanoRacks, a small Houston-based startup, which has simplified the process of sending experiments to the space station and also launches small satellites known as CubeSats.

A couple of years ago, Manber asked his engineers to look into an idea Nasa had previously discarded: could used rocket parts left in orbit be converted into a low-cost space station? NanoRacks, collaborating with United Launch Alliance, a joint venture between Boeing and Lockheed Martin, won a Nasa contract to explore the idea, focussing on the second stage of ULA’s Atlas 5 rocket. The idea is to add a small robotics module between the second stage and the satellite payload on top. For Manber, the key is flexibility. “The market will tell us the market,” he said. “So we go with it.”

The third major entrant in the private space station race is Axiom Space, also headquartered in Houston. CEO Michael T. Suffredini, who ran Nasa’s portion of the International Space Station until he retired in 2015, said an Axiom station would cost about $50 million a year to operate, a small fraction of what the ISS costs.

“We’ve done a lot of work to validate that number. It’s a shocking number for us, too,” Suffredini said. Lower costs open the possibility of profit.

Suffredini would not describe in detail all of the possible markets he foresees, but the business would include sending the wealthy on sightseeing trips — Philippe Starck, the superstar French designer, is designing the interior of the Axiom module — and offering factory space for manufacturers looking to produce materials that can only be made in space. “I’m absolutely certain we can pull off our business plan,” Suffredini said.

But not everyone is convinced. Paul K. Martin, Nasa’s inspector general, this year issued a report outlining these concerns. “Specifically, we question whether a sufficient business case exists under which private companies will be able to develop a self-sustaining and profit-making business independent of significant federal funding within the next six years,” he said.

China plans to finish its own space station in the early 2020s, and officials have promised to make it available to researchers around the world. Russia has also talked about retaining its half of the ISS. Space policy experts, even those who enthusiastically hope that Nasa will take a more commercial approach, hesitate to predict when putting people in space becomes economically viable for private enterprise.

Charles Miller, former Nasa official who is now president of Nexgen Space, expects that there will be three space stations in orbit in 2025: the ISS, the Chinese station and the beginnings of a commercial one. “We’ll still have raging debates about the future of the ISS,” he said.