The Japanese corportaion has positioned the latest model about half a segment higher than the 4G model, a sort of a bridge between the last-gen City and the Civic 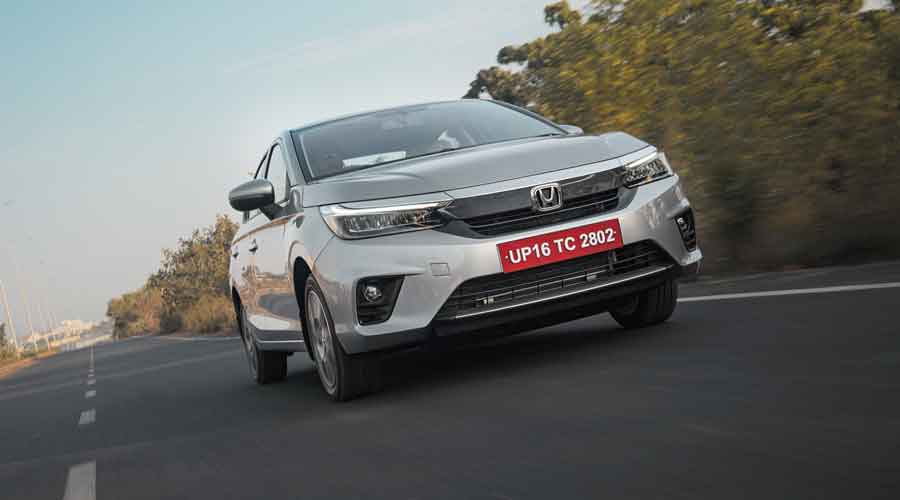 Honda Cars India has done something rather unusual. It has rolled out the latest model of its City sedan, the fifth-generation model in the Indian market, but it has not discontinued the previous, fourth-generation car. So, it is going to sell both the versions of the car bearing the same moniker simultaneously.

A probable reason why it has been able to do this is that, in the process of the generation change, the City has grown up a bit as well. Thus, it is now being positioned about half a segment higher than the 4G model, a sort of a bridge between the last-gen City and the Civic.

The Telegraph drove both the petrol manual transmission as well as the CVT (constantly variable transmission) automatic in the top ZX trim. Here are the impressions.

The City has always been a smart-looking car and that hasn’t changed. But it has grown bigger now — about 11cm longer and 5.3cm wider than before. The wheelbase remains unchanged though. Honda’s signature chrome bar finds its way into this car as well and along with the swooped-down bonnet, makes for a purposeful face.

The nine-LED headlamps add an attractive element to the front. In this trim, the LED theme continues into the daytime running lights (DRLs), turn indicators, fog lamps and all the way round to the tail light cluster that has a 3D kind of look. A nice small detail is that the lower crease on the flank continues onto the bumper. The alloy wheel design goes well with the styling of the rest of the car.
Overall, this is a more expensive-looking design dominated by the front and with cues like the gently curved down crease that give it a sense of premiumness, much of which wasn’t there earlier. 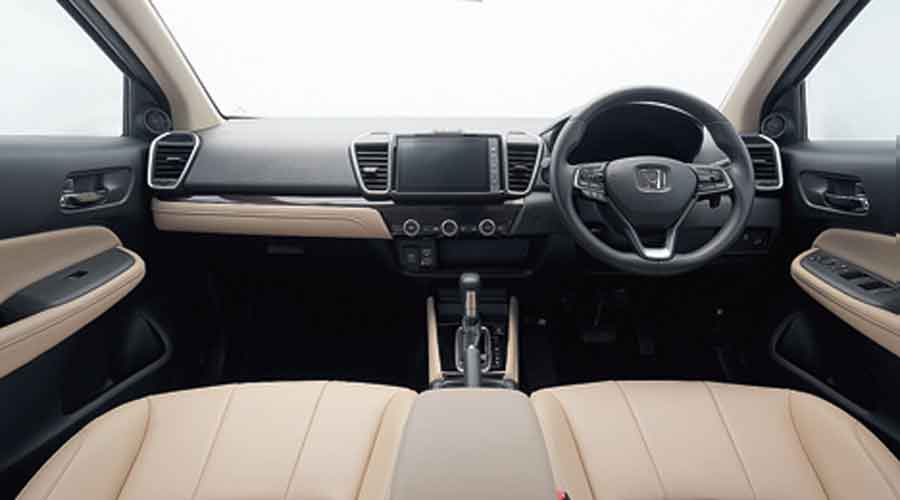 Interior is a big step up both in terms of sophistication of design as well as feel, compared with the previous model
Sourced by The Telegraph
The interiors

The difference here is pretty big. We were never great fans of flat and shiny bits of dark plastic that are there in the older car. Thankfully, all that has been ditched. The overall two-tone design is understated but looks upmarket with nice brushed aluminium inserts around the aircon vents, gear lever and steering. And while the plastics are not soft to the touch, they are textured and look good. A little wood insert and a bit of soft trim have been thrown in for that rich feel.
The seats are excellent in terms of support and position. Touch points have been paid attention to — the steering wheel and gear lever knob are leather-wrapped, climate control and other dials click nicely when operated and everything is just where one needs them.
The big improvement is the rear seat. There is loads of legroom and the floor slopes up gently to let feet rest at a comfortable angle. The sunroof isn’t panoramic, but the cabin is still airy enough.

The instrument cluster comprises an analogue speedo and a screen that can be customised to show all sorts of readouts, including, hold your breath, G-forces! We loved how the simple white-on-black design is so clear to read while driving.
There is also a useful blind spot camera on the left that switches on with the turn indicator and displays on the infotainment screen. It can also be switched on from the light control stalk kept on at all times. 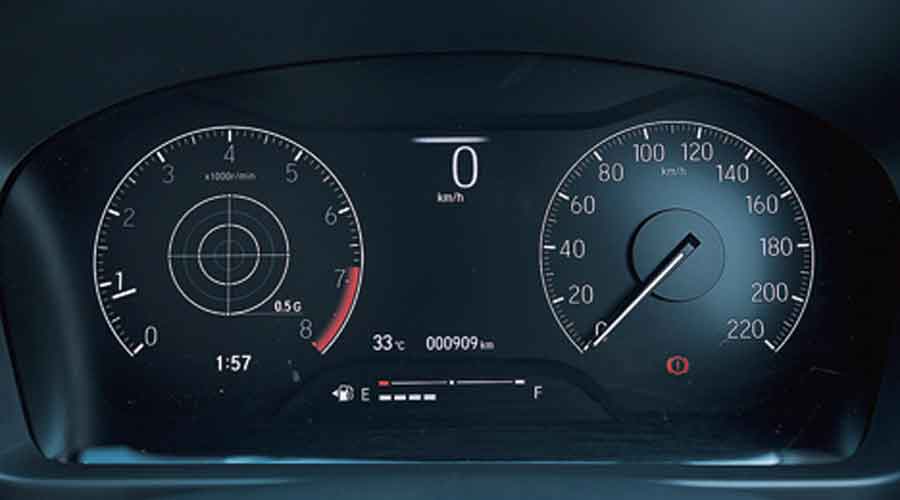 The speedo is still analogue, while a customisable screen takes up the rest of the space in the instrument cluster
Sourced by The Telegraph
The engine and transmission

The 1.5-litre petrol engine is a new i-VEC unit with a nicely torquey bottom end and linear power delivery. It is a double overhead cam unit and spins quite freely. We drove the CVT first and promptly took it into some fairly crowded narrower roads to see how it behaved. Must say it was pretty good. Even at slower engine speeds driving was stress-free with no perceptible lag in power delivery. The Sport mode ups the revs. Paddle shifters help if you want to move down a slot or two, but it’s not all that necessary to do so either.

Even when floored, the effect isn’t like a delayed surge but rather a steady linear climb that doesn’t knock your socks off but does the job well. So, best to leave it in D, or S if you must, and drive with your right foot. That’s the least stressful way to go.
If it’s driving fun you are after, however, the six-speed manual is the one to go for. We drove it in the rains and through consequently slower traffic, but it’s still a lot of fun to squirt it through the gaps. The power delivery is very predictable, the gear throws short and slick, the engine is rev-happy and steering precise. The last could do with a little more feel though. But that’s not a dealbreaker. 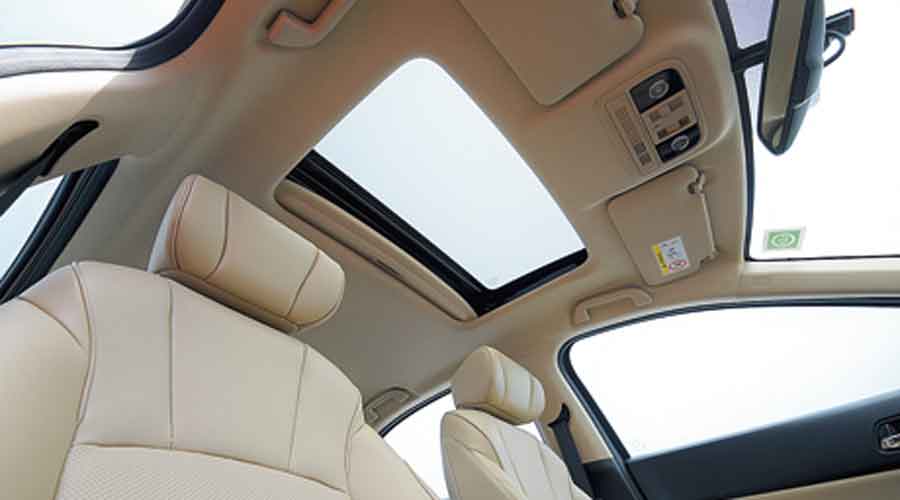 This is one place where the City excelled. For quite a few years now, Honda has been able to bring out cars that are sprung stiffly enough to handle well, but pliant enough to soak up the bumps and give a comfortable ride. That quality is there in this one as well. Yes, some big broken bits and sudden potholes get through to the seat and the passenger, but most do not. Nor does the suspension crash through the bad parts. So, it feels like a bigger car that way.
When we first set eyes on the car, it seemed like it could do with bigger wheels. Not once did that feeling come back when driving it though. Not even when we pushed it fairly hard around faster turns in the wet. It drove nice and true all along and even managed to bring out a smile a few times. 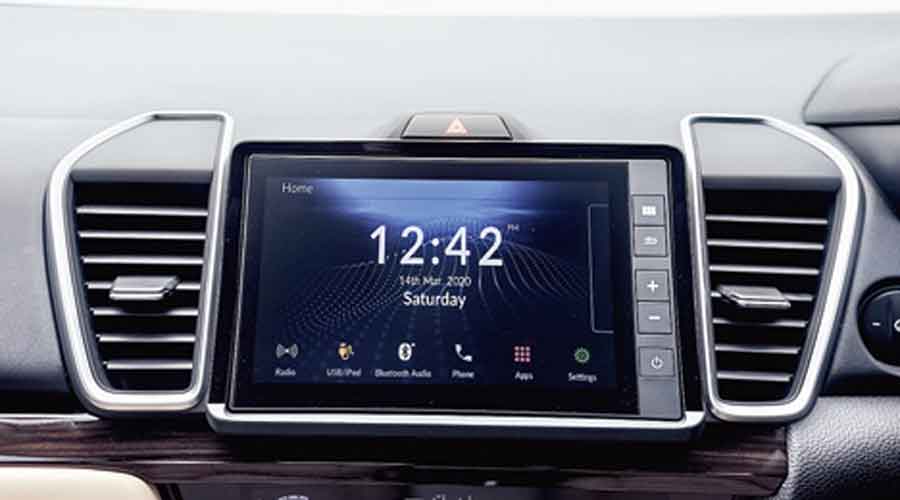 Connectivity is the name of the game today. What’s different in the new City is that it has Alexa remote capability. Once set up, one could ask Alexa to check a host of things about the car like where it is, how much fuel it has and what the tyre inflation is. It can also be asked to turn the climate control on or lock or unlock the door or boot. And all this from near an Alexa device or through a phone with the Alexa app. But no command can be given from the car yet. That apart, there are the phone connectivity features including playing audio and video over the infotainment system. It’s good that it isn’t reflective. And it’s still clear enough.

The new City also comes with a full complement of safety features too — passive (like protective body shell) and active (brake assist and distribution, stability control, traction control and so on).

At its price point, Honda has effectively pitted the City against some very competent vehicles in the SUV segment along with sedans. For sedan buyers it makes a strong case for itself. Whether it has what it might take to pull a buyer away from an SUV is a question we really don’t have the answer to. The City still has all the qualities it was known for and has just grown up a bit in demeanour. And that can only be a good thing. 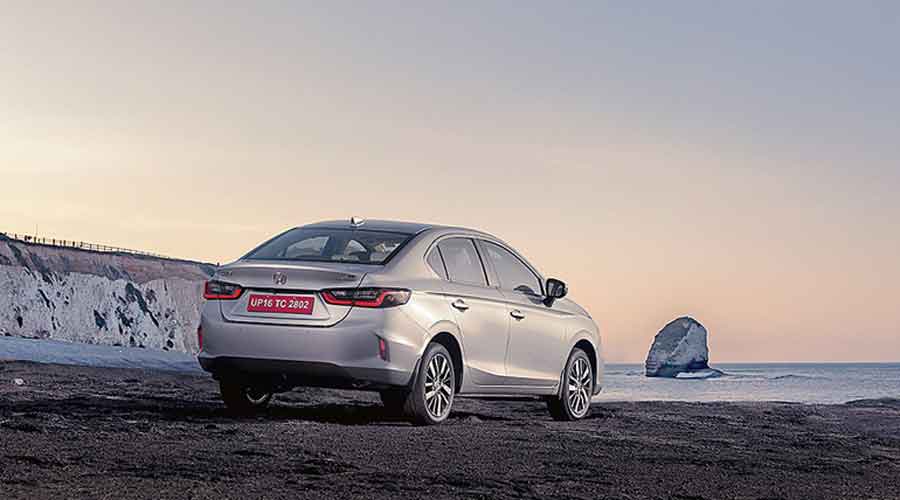 Price range (with petrol engine and including both manual and auto) Rs 10.90 lakh to Rs 14.45 lakh (before levies and taxes in Calcutta)