Meet Ajey Nagar, aka CarryMinati, the leading individual creator on YouTube in Asia with 30 million-plus subscribers 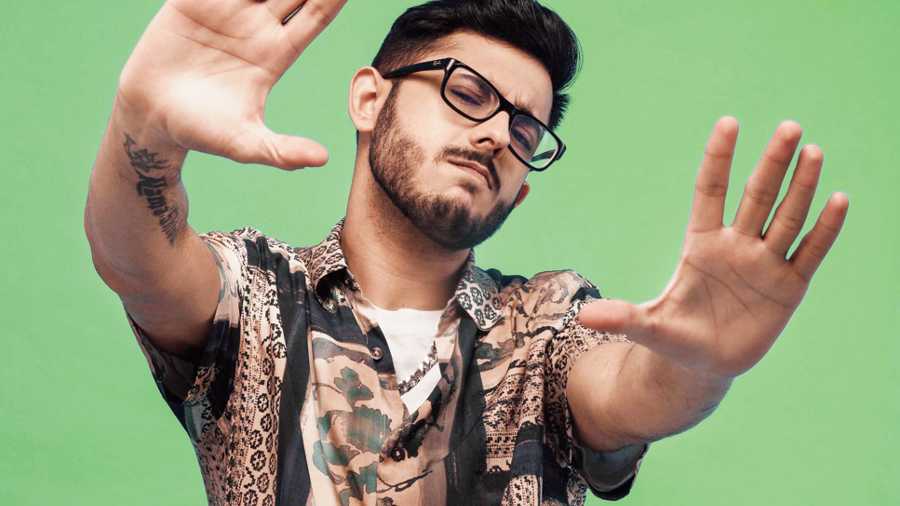 How can a person keep 30 million YouTube subscribers engaged? Or give something to talk about to his 13.2 million followers on Instagram? Ajey Nagar has been doing this for years, perfecting the art of short videos for the web. Under the name CarryMinati, he has been speaking a language that’s relatable to millennials. “My USP is relatability and authenticity,” he said. Only 22 years old, Nagar has grown up watching content on the web and now he is on the leader board. What keeps him going at a time when Snapchat and Reels are enjoying tailwind? Being the leading individual creator on YouTube in Asia is definitely not easy. Hear it from Nagar...

My platform is a place where you can set yourself free and be your most authentic self without being judged and I think that’s the biggest vantage point. My biggest win is the love and support I get from the masses by not being biased to any character and by just being myself. I make my videos from scratch, edit, write and perform them myself. I don’t have a team for content creation but I have a team that helps me with graphic work, making thumbnails, static posts, and so on. I wouldn’t say there is a fixed schedule because my content is more impromptu. It takes three-four weeks generally to evaluate the relevance of a topic to executing the whole video, if there are no skits involved.

I do try to be accountable and responsible on the Internet in the best way possible. Most of the time, while roasting, I go with the flow without being cautious at all but yes, I do try to be careful as far as possible so that I do not hurt anyone’s feelings intentionally. At the end of it, we all have to understand that roast is a roast and my intentions are never malicious. It’s pure entertainment and meant for a good laugh. You can’t always be politically correct and the day you start finding logic in entertainment you may just defeat the ideology of finding escapism within entertainment.

When you are real, you feel more confident, it doesn’t make you immune to criticism but at least you can learn to embrace the fact that everyone is entitled to an opinion and then it doesn’t make such a grave impact. You need to remember the criticism you get for your content and character played by you does not define you as a person and I try not to take criticism too personally. As far as critics are concerned, they are not the torchbearers of an ultimate truth. I still take their criticism in a healthy manner and try to improvise if there is scope but if the criticism is out of context or out of my genre or based on assumptions then it is quite disturbing.

Experimentation and diversification are key drivers for content survival. Experimental content is the king of new-age media, and the algorithm that loves you the most when content speaks to the audience and breaks stereotypes. But it’s important not to be jack of all trades and the master of none. Audience loyalty is built via the content and not the platform. As artistes we are constantly evolving, otherwise we will become redundant because your end user remains the same and to keep them invested for the long haul you need to constantly better what you are placing on the table.

I have never undertaken anything in my life to gain money or fame. For me passion is the numero uno motivation and if my passion can get me money and fame, then those are additional perks. In fact, I have always been quite reserved and the career path I chose is very contradictory to who I am in reality. Fame, success, money… all three are very valuable and take a lot of sweat and toil to be earned and should not be taken for granted but they do not qualify for a good night’s sleep. The biggest achievement for me is to be able to positively impact so many lives and be a source of motivation and entertainment, in good and bad times.

I wouldn’t say it’s completely sustainable because the platform constantly evolves; there is a growing emergence of other mediums for promotions and your content needs to be adaptable and change quite frequently, else there is a sense of stagnation. I believe you need to be careful about what you do and how you are going to do it. If you do YouTube for money and not for the passion of creating, you won’t be able to do it for long. Do you want to create content that nobody has ever seen before or do you want to become rich and famous? It’s okay if you just want to be rich and famous, a lot of people want that but be truthful to yourself about it.

I put out ‘Uncanny Roaches’ recently. I’ve always toyed with the idea of experimenting with animation since I’ve childhood memories associated with cartoons and my style of roast comedy is better leveraged with animation, which breaks away from the limitations that come along with live action. In 2017, I had come in contact with various illustrators but they helped create animated posters which I use as my profile picture. In 2018 I hoped I’d script an animated series featuring all my reel characters, but I never got down to doing it since my performance style was more improv. This is when I realised that I needed to hone my assimilation skills to attain that sense of presentational faultlessness. In October 2020, after a pretty upsetting week, I decided I’d finally work towards compiling a top-notch animated video.

The initial title that came to my mind for the video in that bleak state then was ‘A Meeting With The Devil’ but then, of course, we improvised it to ‘Uncanny Roaches’. I began scripting for the animated video around November but was occupied with ‘Mayday’ and ‘Vardaan’ in December and January and then in February, my grandmother unfortunately passed away. By the first week of March the first draft of the animation was scripted. Post this, I binge-watched the entire season of Big Boss for the roast video. It took me close to two months to perfect this entire series. I’ve also returned to my older methodology as I feel my creative evolution has taken a full circle. It’s an upgraded version of CarryMinati and the whole goal was to present the best video of my lifetime.