Block in the Brain

Indian neurobiologists rethink their strategy on cracking the causes of a genetic disorder. G.S. Mudur reports 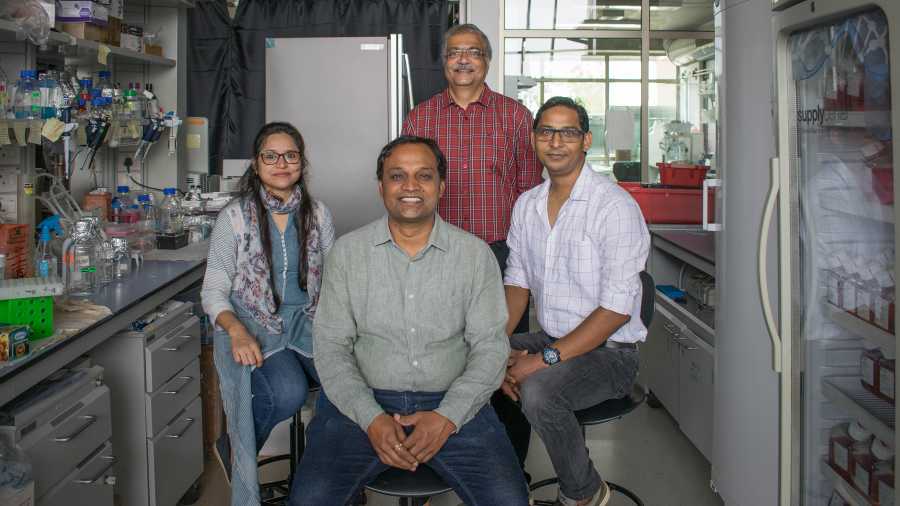 Sumantra Chattarji (standing) with his colleagues at the National Centre for Biological Sciences, Bangalore
Sourced by the correspondent
G.S. Mudur   |   Published 01.11.21, 12:11 AM

Seven years ago, the two pharmaceutical giants Novartis and Roche independently discontinued their clinical trials aimed at trying to reverse Fragile X Syndrome (FXS), a genetic disorder and the most common inherited cause of intellectual disability and behavioural issues.

Neither of the two trials had found improvements in volunteer patients who had received experimental drugs designed to block key receptors, or gateways, that led to amplified activity in the hippocampus and cortex — brain regions involved in learning and memory — in FXS patients. The drugs had earlier successfully blocked the receptors and appeared to successfully reverse FXS symptoms in animals, bolstering hopes that they would work in humans.

The clinical trial failures were disappointing. There is currently no cure for FXS, a disorder marked by developmental delays, learning disability, autistic behaviour, poor eye contact, anxiety, trouble paying attention, or movements such as hand flapping. A 2014 epidemiological review had estimated the prevalence of FXS to be one in 7,000 males and one in 11,000 females. The clinical trial failures were also puzzling — it wasn’t clear why something that appeared to work well in experimental animals didn’t work in humans.

Now, a study by neurobiologist Sumantra Chattarji and his colleagues at the National Centre for Biological Sciences (NCBS), Bangalore, might explain those disappointing results.

The NCBS study focussed on an area of the brain called the amygdala — the hub of emotions and fear — and has underlined what might be a previously overlooked but critical challenge in efforts to treat FXS. What needs to happen and is achieved through therapeutic drugs in one part of the brain may achieve the exact opposite effect in another part of the brain and stymie treatment efforts.

Chattarji’s team, working with collaborators in Europe and the US, have now shown through lab experiments on rats that FXS may be reversed by activating — not blocking — the same receptors in the amygdala that the Novartis and Roche trials had tried to block in the hippocampus and cortex.

The challenge thus appears to be to find a way to block those receptors in the hippocampus and cortex while simultaneously activating the same in the amygdala.

“We need to do exact opposite things on the same target in two different areas of the brain,” Chattarji told The Telegraph. “Our results suggest that the challenge might be much tougher than we’ve assumed all these years — there might be a need to go back to the therapeutic drawing board.”

Chattarji himself had been involved in experiments 14 years ago in which neuroscientist Mark Bear of the Massachusetts Institute of Technology, US, and collaborators alleviated FXS syndrome in mice by reducing the activity of the receptors in the hippocampus. FXS is known to be caused by a defect in a gene for the so-called fragile X mental retardation protein (FMRP) that was believed to act as a brake on protein synthesis in specific areas of the brain. Bear and Chattarji had reasoned that the loss of the brake allows another protein — the receptor — to function unchecked, amplifying activity in the hippocampus and cortex. They engineered mice and found that lowered activity of the receptor was able to overcome the effect of the lack of FMRP.

But the clinical trial failures in 2014-15 stirred speculation about why the receptor-blocking strategy didn’t work in humans and prompted Chattarji to focus on another brain area called the amygdala. FXS patients show unusual emotional behaviour that pointed to a possible role of the amygdala in such symptoms. A neuroimaging study by researchers in the US had in 2007 found that men with FXS exhibited reduced activity in the amygdala in response to fearful faces compared with men without FXS.

“What the emotional symptoms and that study implied is that there is some amygdalar dysfunction in FXS — but most earlier efforts at understanding or correcting mechanisms underlying FXS were focussed on the hippocampus and cortex,” Chattarji said.

In their new study, Chattarji and his colleagues have shown that activating rather than blocking the receptors in the amygdala reverses induced fear-learning defects in rats designed to mimic FXS and restores normal fear-learning behaviour. Their study was published in the peer-reviewed journal Cell Reports earlier this month.

Scientists not associated with the NCBS study said that the new results point to complexities in targeted treatments directed at specific brain areas.

“We’re only now talking about the amygdala and the hippocampus — reduced FMRP affects many brain regions,” said David Hessl, a neuropsychologist at the University of California, Davis, US, who had documented the fear mechanism deficits in FXS patients in 2007.

Randy Hagerman, a distinguished professor at the paediatrics department and medical director of the MIND Institute at the University of California, Davis, US, said the NCBS work “explains a lot”, particularly why the receptor blocking effort did not work in FXS.

“However, there are many other targeted treatments that could be beneficial for the amygdala and the hippocampus or a combined medication approach may need to be considered — one medication for the amygdala and another for the hippocampus and other brain areas,” she told The Telegraph. “We really need to do more studies such as the one by the NCBS to gain a complete understanding of the effects of medication in different brain areas.”

Chattarji worked with NCBS scholars Giselle Fernandes, Pradeep Mishra, Mohammad Sarfaraz Nawaz, Aiman Kayenaat, Anupam Hazra and Dheeraj Songara along with collaborators in academic institutions in Europe and the US.