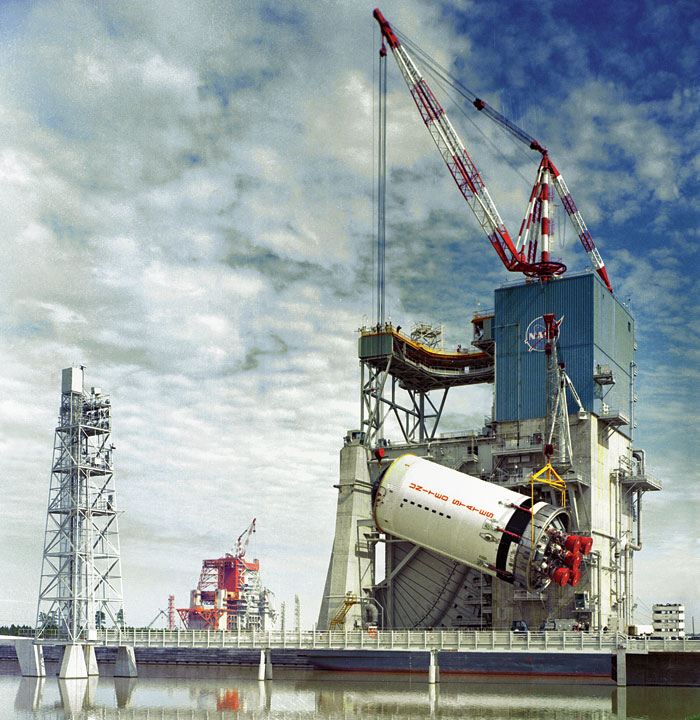 The people and places that brought us Apollo 11 are disappearing. While the astronauts and Nasa’s mission control in Houston garnered the most attention during the moon landings, an army worked to put the pieces together across the country. That included the rocket scientists in Alabama who developed the Saturn 5 rocket, the women who sewed the parachutes and US Navy divers who met the astronauts after splashdown.

“Thank you, the 300-and-some-thousand Americans working on that programme,” Michael Collins, command module pilot of Apollo 11, said in a recent interview. “They all did their jobs so properly.” The two key pieces that were the astronauts’ home during their lunar trips were built on opposite sides of the country.

The Apollo capsules rolled off the assembly line in Downey, California, 15 miles southeast of downtown Los Angeles, US. Fifty years ago, Nasa owned a 160-acre tract of Downey that was home to factories, offices and test facilities.

“We referred it to as a city within the city,” said Gerald Blackburn, one of the more than 25,000 people who came to work in Downey at the height of Apollo programme in the mid-1960s. “We worked at the spaceship factory. We were all part of Team Apollo. It was a magical place.”

That is gone, replaced by a sprawl of stores, movie theatres and restaurants.

The story was almost the same in Bethpage, New York, on Long Island. That was the headquarters of Grumman Aircraft, which won the contract to build the spindly spacecraft that took Neil Armstrong and Buzz Aldrin to the surface of the moon. Today, Grumman’s cavernous assembly building still stands, but it is a movie soundstage. The company, now part of Northrop Grumman, left New York more than two decades ago.

In 1961, only a few months after President John F. Kennedy announced the goal of putting astronauts on the moon by the end of the 1960s, North American Aviation, which leased the Downey site from Nasa, won the contract for the command module and the service module, which provided the propulsion and power. It also won the contract to build the second stage of the gigantic Saturn 5 rocket. Grumman won the lunar lander contract a year later.

To appreciate the whiplash pace of aerospace progress during the 20th century, look at the life of Ernest Finamore. When he joined Grumman as a teenager during World War II, he riveted together TBF Avenger torpedo bombers, propeller planes with a top speed of 275 mph and a range of 1,000 miles. By his 40s, he was a lead inspector for the construction and testing of the lunar lander, which would make history a quarter-million miles from Earth.

Finamore, 93, shared a memory of the day he bumped into Neil Armstrong. As he was working in the lunar module cockpit, there was a knock on the door. “The guy comes in and bumps shoulders and all,” he said. “And then I took another slow look and he says, ‘Hi, I’m Neil Armstrong’.”

Armstrong looked out the window and asked about a device called a touchdown rod, which would register when the spacecraft had landed. Armstrong complained that it might bend up and become ensnared with the ladder that he and Aldrin would climb down. An engineer was called in and agreed, and the rod was removed. (The rods on the other three landing pads remained.) Armstrong also laughed at the two stools in the cockpit. Finamore recalled him asking, “‘When am I going to have time to sit down?’ I said: ‘Oh, OK. Take the stools; save more weight.’ This is how things happened.’ ” 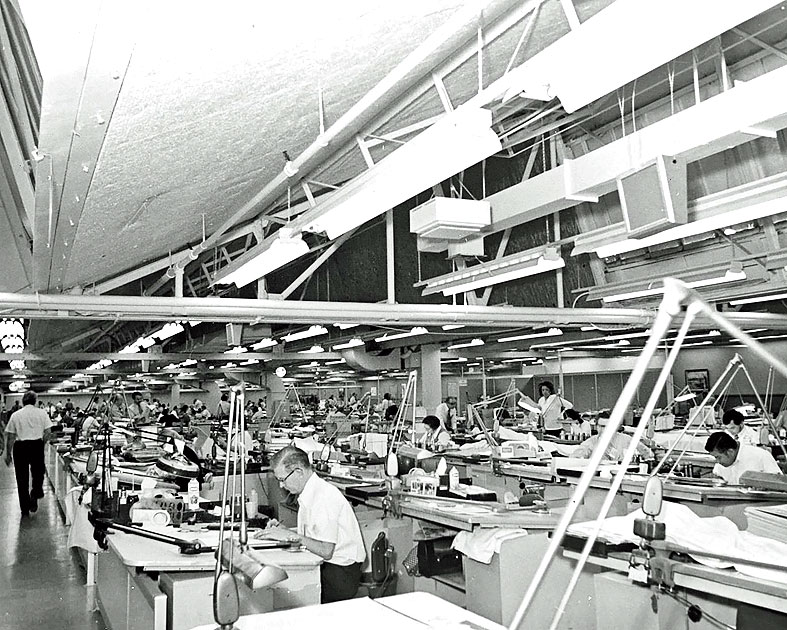 Engineers at the site in Downey, California, where parts of the rocket were built
Nasa

Many Americans thought that the dream of the moon was impossible, but Apollo was a siren call to engineers. Charles Lowry was living in Columbus, Ohio, US, a parachute expert working at a division of North American focused on fighter jets. He remembered being in church when the topic came up. “At some point, the leader said, ‘I understand now that the US government has a plan to go to the moon. How many people really think we’re really going to the moon?’ And my hand went up. I looked around me, and no other hands went up. Not even my wife’s hand.”

Lowry wanted to move to California and join the moon effort, which would need parachutes for the Apollo capsule’s return to Earth. But his wife did not want to move far from their families.

Shelby Jacobs worked at Downey on the second stage of the Saturn 5 rocket. He is best known for a camera system that captured the separation of the first and second stages of the Saturn 5. “Nasa said, ‘Show me,’ ” Jacobs said. “They were concerned if it didn’t separate properly, we could lose the whole vehicle and the whole crew and everything.”

In the 1960s, there was no way to beam high-resolution video of a fast-moving rocket back to ground, so Jacobs figured out how to protect the camera from the violent shaking of the rocket. “After it took the film, it was ejected out,” he said. “It had fins that deployed that kept it right side up. It had parachutes when it landed and beacons to be picked up in the ocean. These films were developed after the flight.” The cameras flew twice, on crewless test flights of the Saturn 5.

The Downey and Bethpage sites have faded into history. Grumman emptied its Long Island headquarters after it was bought by Northrop Corp. in 1994. North American, which merged with Rockwell International, later designed and built the space shuttles. In 1996, the aerospace piece of Rockwell was sold to Boeing, which abandoned the Downey site in 1999.

“That was really hard, to watch them tearing down not just history,” Blackburn said, “but removing a major part of my life.