A cigar-shaped mystery that could be an alien relic

Researchers suggest this could be first evidence for extraterrestrial technology 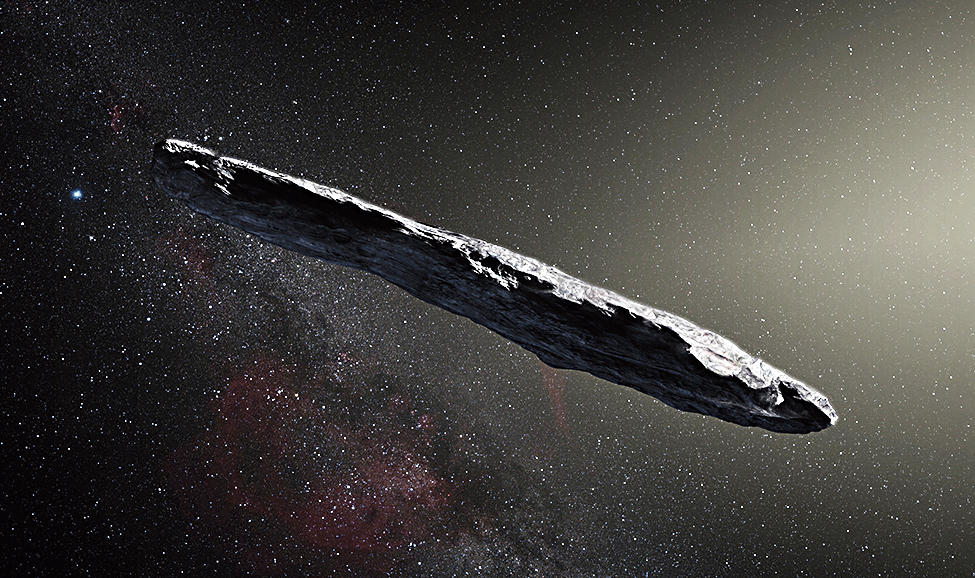 A mysterious cigar-shaped object that astronomers spotted in the solar system last year could be an artefact from an alien civilisation sent to explore the Earth’s neighbourhood, two Harvard astronomers have postulated.

The researchers said the non-gravitational acceleration displayed by the object called Oumuamua could be explained through the effect of solar radiation pressure on a light-sail, a sail pushed forward as it reflects light from the sun.

A group of Hawaiian astronomers had first spotted the object on October 19 last year and noticed within days its unusual features — a dark-red hue and a highly elongated shape, about 800m long — and a trajectory that indicated an origin outside the solar system. “Oumuamua” means “scout” in Hawaiian.

Groups of astronomers in Europe and America who watched the fast-fading object as it moved away from the Sun debated whether it was an asteroid or a comet.

Abraham Loeb, professor and chair of astronomy, and Shmuel Bialy, a postdoctoral scholar, at the Harvard Smithsonian Centre for Astrophysics have in a paper submitted to The Astrophysical Journal Letters now brought a new angle to that discourse.

“Our paper suggests that the first evidence for extraterrestrial technology may have just passed by the Earth last year,” Loeb, who is also director of the Institute for Theory and Computation at Harvard, told The Telegraph via email.

Scientists from Europe, Israel and the US had in June this year, relying on multiple observations, reported an acceleration of Oumuamua that could not be explained through the gravitational effects of the Sun or other objects in the solar system.

In a paper published in the journal Nature, the scientists had attributed the acceleration to gas emissions that occur when ice on a comet vaporises through heating by the Sun.

But no cometary tail has been seen around Oumuamua. Nor have astronomers observed the variations in its spin that comet-like out-gassing would have produced.

Loeb and Bialy have proposed that Oumuamua’s non-gravitational acceleration may have been produced through a light-sail. They have highlighted that light-sails with similar dimensions have already been designed and built by our own civilisation. In 2010, Japanese engineers had launched a light-sail called Ikaros.

The Harvard astronomers’ paper shows that a light-sail with a thickness of just 0.3mm to 0.9mm could survive a long journey through interstellar space, unharmed by the likely collisions with atoms or dust particles.

“One possibility is that Oumuamua is a light-sail floating in interstellar space as a debris from an advanced technological equipment,” they wrote in their paper, citing how earlier studies had proposed light-sails for interstellar travel.

“Alternatively, a more exotic scenario is that Oumuamua may be a fully operational probe sent intentionally to Earth vicinity by an alien civilisation,” they said.

The astronomers said that Oumuamua was inferred to have an elongated shape, unobserved in any known asteroid or comet. The information about its shape stems from the variation in reflected sunlight as it spins, Loeb said.

Even a thin sheet that is folded as an umbrella might appear from a distance similar to a rotating cigar based on the variation of sunlight, he said.

Bialy said the current observations did not rule out a pancake-like geometry. Studies re-examining the light signals more carefully suggest that Oumuamua could be very elongated cigar-shaped to pancake-shaped.

“What is clear is that it can’t have a shape that is nearly spherical -- like normal rocks we know,” he said.

Loeb said the mystery of Oumuamua’s origin remains. “It is unclear whether it might be a defunct technological debris or whether it is functional. Radio observatories failed to detect any transmission from it (with instruments capable of detecting transmissions) at a power level higher than a tenth of a single cellphone,” he said.

The astronomers have suggested intensifying surveillance for similar objects. “Since it is too late to image Oumuamua with existing telescopes or chase it with chemical rockets,” they wrote, “its likely origin and properties could only be deciphered by searching for other objects of its type in the future.”