A look at the Galaxy A9's unique design 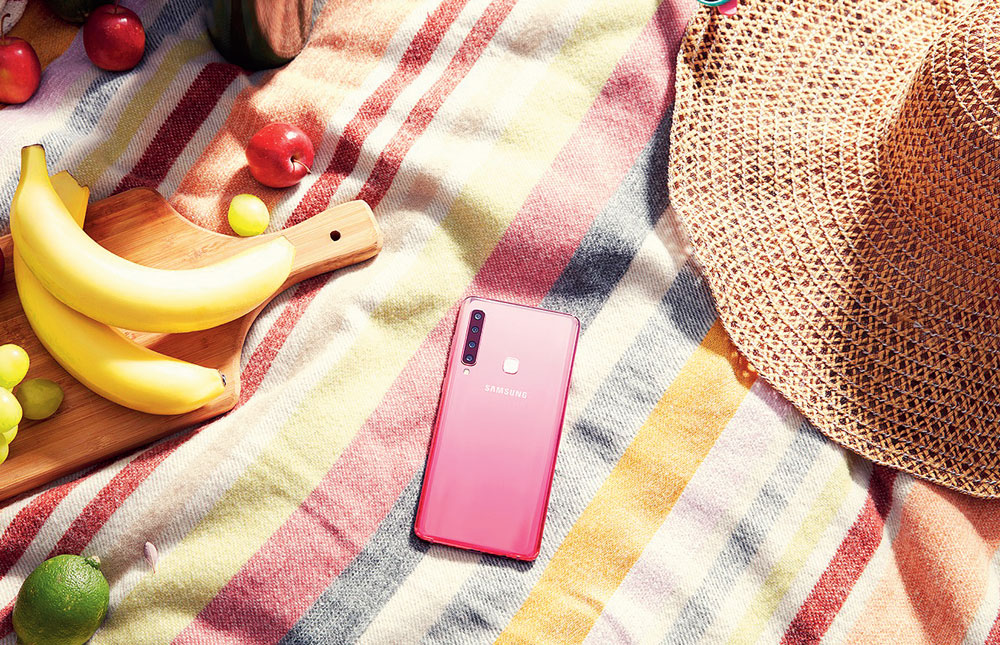 Samsung has design offices around the globe and whenever there is a new design, the company goes by trend researches. There is a colour and materials finish lab. According to predictions for 2018, gradient colours would be a major trend, not just for the mobile industry but also for architectural and cosmetic industries. We chose glass because it has a unique characteristic because of the way it can glow and maximise the elegance factor. To come up with the final product, the design team had to work with other teams and we came up with more than 100 prototypes. I can’t even remember the exact number.

Pretty in a row

Four cameras were placed in a straight line on the back of the phone because, from the designer’s perspective, it’s the best option and it gives users a good experience. Also, we had to incorporate a big 3,800mAh battery, which takes up space. When there is additional functionality, like four cameras, there is a need to emphasise it. The cameras have a unified look; it looks as if it is integrated into the body.

There is a need to give options to users. So the design of the A7 and the A9 are different. The A7 has three cameras on the back and fingerprint scanner on the side, while the A9 provides more camera functionality and the fingerprint scanner is on the back. Further, when we are designing something new, we always focus on offering a better experience.

Instead of specifications, the mobile phone camera has become the biggest smartphone battleground. At this year’s Mobile World Congress in February, it was more about showcasing the camera rather than what’s under the hood. In fact, Samsung with its Galaxy S9 cracked the formula for detailed low-light photography; it combined two different aperture settings in a single-lens camera. The S9’s 12MP dual pixel sensor can take in more light in dim-light conditions and it can also take 12 separate snaps with the press of the shutter button and then combining them in post-production to reduce background fuzz.

This month, Samsung pushed the boundaries by introducing four cameras on the back, which is an interesting concept. On the Galaxy A9, there is one main sensor, one telephoto sensor that offers optical zoom, one ultra-wide sensor, and a depth sensor for ‘live focus’ portrait effect. And yes, the pictures do come out great.

Four cameras also mean giving the design team a headache. Accommodating four cameras on the back and at the same time a big battery plus all the other components takes a lot of planning. The responsibility for making an innovation stand out in a cool design belongs to Sang Il Park, principal product designer, mobile communications business, Samsung Electronics. “I have been a designer at Samsung Electronics for 18 years. I started out as a TV designer with the visual display team and then I did some advanced design work at the design centre. Currently I belong to the mobile design team,” said the man who oversees the design element of the company’s A series smartphones. A decoding by Il Park.

Every design at Samsung is based on unique user experiences and the surroundings they are in. We come up with designs that consumers can relate to. To design the Galaxy A9, we met millennials, who are trendy and energetic, which is a great inspiration for designers. These are people who drive new cultures around the world and follow a path that’s unconventional. They actively express themselves and they are not hesitant to try out new things. We were inspired by their lifestyles and came up with three key aspects of the A9. First, a camera that’s naturally integrated into the phone. Second, the glass back glows in diverse colours when placed under the light. Third, youthful energy that’s expressed through the gradient colour of metal and glass.

A shiny phone for happy youngsters

We worked to maximise the silhouette of the glow of the glass in diverse colours. We had to place a laminate film on the back, which led to beautiful reflections that change depending on the angle. And to amplify this, we had to implement a finely-calculated curvature on the back glass, which was a big challenge from the glass-manufacturing perspective. Another challenge was the metal gradation. We introduced a new method to give the metal on the side a unifying look with the gradient colour of the back glass. It was important to implement an anodising manufacturing method that involves having a light-coloured upper part and a darker lower part. Based on the youthful energy millennials have, we came up with three gradient colours — caviar black (represents sophistication), lemonade blue (gives you a feeling of vividness) and bubblegum pink (reminds you of happy moments).