The South Korean electronics giant has several meaningful improvements on the new device, which also appears to be the most approachable folding phone on the market 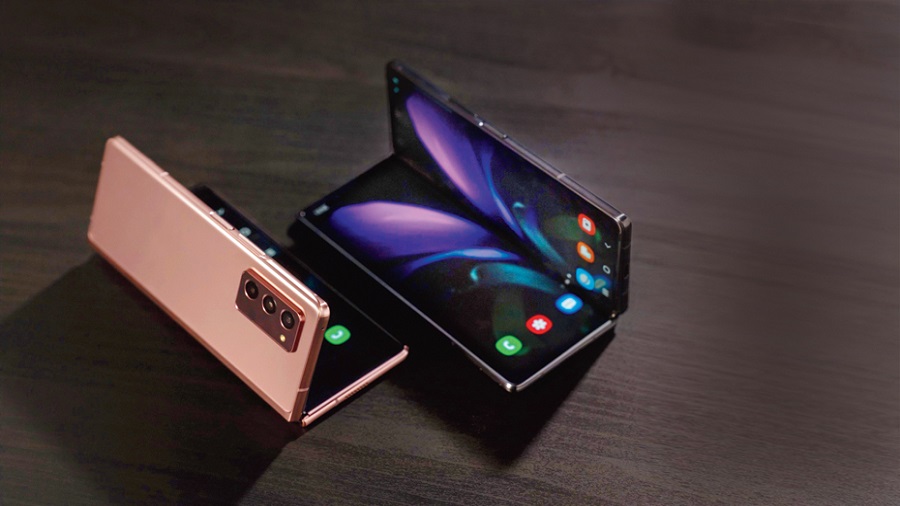 Samsung Galaxy Z Fold2 has addressed all the issues one has had with folding phones. It’s set to appear in select markets starting September 18.
Samsung Electronics
Mathures Paul   |     |   Published 02.09.20, 09:53 PM

A sturdier hinge mechanism. Better screens. More productivity tools. Samsung is betting big on foldable phones for future growth. The South Korean electronics giant has several meaningful improvements on the new Galaxy Z Fold2, which also appears to be the most approachable folding phone on the market. One factor that will play an important role in the short-term success is the opening of offline stores. Most haven’t seen or held a foldable phone. It’s an expensive device, which means customers would like to experience it before making a purchase.

Here are a few reasons why the Galaxy Z Fold2 can make a difference to Samsung and the form factor of smartphones in general.

A step in the right direction

Like on any new product, the first generation of the Galaxy Fold had several issues and was delayed for months. Instead of turning away, Samsung addressed every chink in the armour by making a redesign of sorts. Yet, there were disappointments, like a “jelly-scrolling” effect. Every issue on the original Fold started getting addressed with the Galaxy Z Flip, which was released earlier this year. Instead of an easily damageable sheet of plastic, ultra-thin glass technology was brought in and the form factor was looked into. With the Galaxy Z Fold2, it’s one more step forward for the South Korean company.

The hinge mechanism on the company’s first folding screen was delicate, to say the least. It has been completely re-engineered on the Z Fold2 with the hinge now having tiny brushes to keep dust and sand from getting inside and damaging the screen. Besides, the hinge is tighter while the gap between the screens when closed reducing substantially. The screen on the Galaxy Z Fold2 is made of a special glass which is thinner than a human hair and is able to withstand high and low temperatures.

A few weeks back at an event, Samsung Electronics global executive SVP Federico Casalegno said that “going forward, 5G and foldables will be the major pillars of Samsung’s future”. With Apple yet to deliver a 5G phone, there are few choices for American buyers. The number of places you can use 5G in the US is still low but Samsung is in the right place at the right time with the right technology. The Galaxy Z Fold2 5G is powered by a Qualcomm Snapdragon 865 Plus processor (in the US market) paired with 12GB of RAM, which future-proofs the expensive phone. Another reason behind the growing interest is that even as more people work from home, switching between laptops and desktops, mobile phones are also being used more than ever. According to some reports, the usage is up by 50 per cent.

It’s one of the USPs of the foldable phone and something we saw earlier with the Z Flip. The phone can be folded in a way that the inside screen becomes two separate displays, with one half showing content while the other has relevant app controls and settings. For example, in the camera app one half can become a viewfinder while the bottom half can have camera controls as well as offer previews. If you are watching YouTube, you can have the playback controls on a separate screen. With Google Duo, there is more screen real estate to show callers and one half of the screen can be used for the controls. In messaging apps like Outlook, the left half of the screen can show all the mails while the right half can show the content of a particular mail. There is more. While running two apps side by side, like Excel and PowerPoint, the user can drag and drop or copy and paste between windows, which brings it closer to a tablet. With the Flex mode on, the user can leave the phone on a table without having to prop it up while watching a film.

Though the Galaxy Z Fold2 folds like a book, Samsung has upgraded the screen size. The most noticeable upgrade is on the outside, which has a display that’s much bigger than on the original Fold. The cover display is now 6.2 inches diagonally, which is impressive. Unfolded, the 7.6-inch screen supports a 120Hz refresh rate. Plus, the thumb-shaped notch on the original Fold has disappeared, making the unfolded screen more usable.

There is a single 10MP camera as the phone is unfolded; it’s a similar camera on the cover display when the device is closed. On the rear is a three-camera system, featuring 12MP wide angle, ultra-wide angle and telephoto sensors. But optical zoom is restricted to 2X. The feature that’s exciting is Dual Preview. With the phone unfolded to take a photo, people on either side of the screen can see what they look like before a shot is taken.