Advertisement
Home / Opinion / You’re bound by a contract, any contract. Can you wriggle out of it citing Covid-19?

You’re bound by a contract, any contract. Can you wriggle out of it citing Covid-19?

‘Force majeure’ and ‘doctrine of frustration’ have come to play, but the day’s judge will have last word 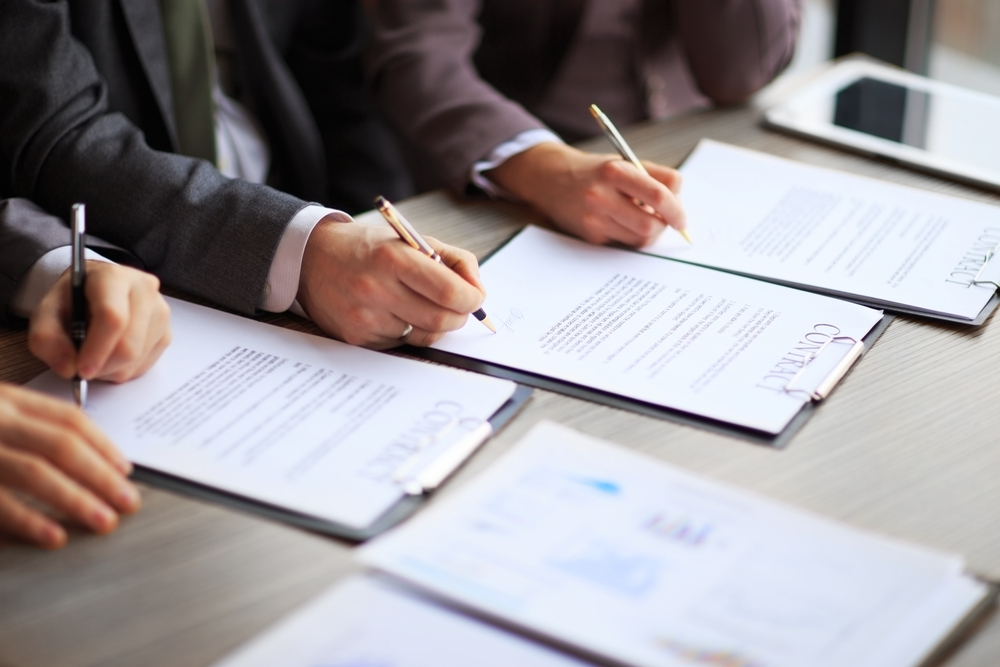 It is imperative to examine the position of law relating to the terminability and/or suspension/relaxation of contractual obligations. Needless to state, there is no better way than to resolve issues amicably.
Shutterstock
Rachit Lakhmani   |     |   Published 22.06.20, 11:28 AM

Business transactions are essentially contractual in nature comprising rights and obligations by and between parties. In the wake of the Covid-19 pandemic, the affected transactions may comprise an eclectic range including lease & tenancy, construction, employment, sale of goods, mergers & acquisitions, etc. wherein parties may be unable or unwilling to perform contractual obligations owing to circumstantial hinderances. In this backdrop, it is imperative to examine the position of law relating to the terminability and/or suspension/relaxation of contractual obligations. Needless to state, there is no better way than to resolve issues amicably. The worst settlement is undoubtedly preferable to the best judgement. Nonetheless, in the case of an impasse, the law as elucidated in this article shall prevail.

The Union Finance Ministry recently referred to the pandemic as a “force majeure” situation. Force majeure (literally, “superior force”; or “act of God”) is a legal doctrine germane to the situation, meaning an event or effect that can be neither anticipated nor controlled. The pandemic and its consequential restrictions, being unforeseen and beyond control of contracting parties, may be construed as a Force Majeure situation.

For a simplified understanding of the doctrine, contracts may be segmented into two predominant categories i.e. (i) contracts containing force majeure clause; and (ii) contracts without force majeure clause. Contracts of the first category are relatively fewer, which usually govern high-stake transactions and are meticulously drafted by lawyers foreseeing situational possibilities. Such contracts may specify the adversities that would be tantamount to force majeure, and the remedy that one may avail therein. For example, the clause may specify that force majeure must mean to include a pandemic and/or government lockdown amongst other things. It may also specify if a lessee could legally terminate a lease before expiry of the lock-in period; or whether a seller may stop supplying or increase the price of goods in a force majeure situation. Such cases are dealt strictly within the terms of the contracts pursuant to section 32 of the Indian Contract Act, 1872 dealing with contingencies. Whether or not a party could legally be entitled to any relief, relaxation or absolution owing to Covid-19 will purely depend upon the wording of such clause in congruence with other provisions of such contracts.

However, most business contracts do not contain a force majeure clause. The fate of such contracts is governed by the “Doctrine of Frustration” which is codified in section 56 of the Contract Act. The doctrine states that a contract to do an act which, after the contract is made, becomes impossible or unlawful, becomes void when the act becomes impossible or unlawful. Nonetheless, the impossibility may not necessarily be in a physical or literal sense. Instead, it may be impracticable and futile in the contractual context so as to upset the very foundation of the contract, wherein the performance of the obligations in the altered circumstances makes the contract itself radically different. Mere incidence of expense, delay or onerousness does not suffice to frustrate a contract. The principles of frustration also apply to contracts which contain a force majeure clause, particularly when drawing a fair lucid conclusion is unfeasible because of contractual ambiguity or otherwise.

These principles of the law on frustration have developed over the years, globally finding mention in judgements galore. The first Indian landmark case before the Supreme Court in this regard was Bangur’s case (AIR 1954 SC 44) where a developer pleaded “frustration” to dissolve his contract of sale and development of land with the purchaser on the ground that a substantial portion of the land was requisitioned by state authorities owing to World War-II. The court, after due deliberation, held that the contract was not frustrated, particularly since the development/sale did not have to be completed within a specific time-frame, and the obligation of development/sale on part of the developer, though delayed, was not impossible.

Supply of ghee during WW II

In Alopi Parshad’s case (AIR 1960 SC 588), agents who were contracted by Government of India to supply ghee at specified contractual rates were desirous of either increasing their rates or terminating their contract in view of the sudden steep rise in expenses which the agents were having to incur, attributable to circumstances triggered by World War-II. Ultimately, the Supreme Court held that neither could the contract be dissolved, nor could the contractual rates be altered merely on the ground that the performance of the contract had become onerous due to economic fluctuations caused by the war.

A similar view was taken by the Supreme Court in the latest case of Energy Watchdog (2017 14 SCC 80) wherein the plea of frustration by suppliers of electricity was disallowed, though they were facing a sudden financial difficulty in supplying electricity at contractually fixed tariffs. The difficulty was attributable to the unforeseen drastic cost increase in the procurement of Indonesian coal used by the electricity suppliers, which was caused by a change in Indonesian law, the cost having been stagnant over the 40 preceding years. It was held that the suppliers should not be absolved of their obligation to supply electricity at fixed tariffs merely because of economic hardships, particularly when the fundamental contract was not of procuring Indonesian coal but of supplying electricity.

In the landmark English case of Tsakiroglou & Co. Ltd. [1961 (2) All ER 179], despite the unforeseen closure of the Suez Canal, passage through which was the customary route for shipping goods, it was held that the sale of groundnuts was not frustrated even though it would have to be performed by a much more expensive alternative route (around the Cape of Good Hope), which was three times the regular distance.

The Supreme Court in Raja Dhruv Dev Chand’s case (AIR 1968 SC 1024) has expressly laid down that the doctrine of frustration cannot apply to a lease, because lease is a completed transfer of property wherein the Transfer of Property Act would prevail over the Contract Act, thereby binding the Lessee to pay the rentals. In fact, it was exclaimed by the House of Lords in the Panalpina Case [(1981) 1 All ER 161] – “I am struck by the fact that there appears to be no reported English case where a lease has ever been held to have been frustrated. I hope this fact will act as a suitable deterrent to the litigious, eager to make legal history by being first in his field.” In this case, a ten-year lease for warehouse was not held to be frustrated despite access to the property having been closed for 20 months by the local authority. The threshold being so high, the ongoing pandemic is unlikely to absolve the tenants/lessees from rent payments.

It can, therefore, be concluded that the doctrine of frustration is applied within narrow limits, where the test of impossibility and/or impracticability in performing the contractual obligation is of the highest and most stringent form; where there exists no alternative mode of performance, notwithstanding how problematic it may be, financially or otherwise.

In the Covid-19 situation as experienced thus far, it may not be easy for a party to wriggle out of a contract for reasons of the pandemic or the consequential lockdown, particularly if the performance of the contract is to take place over a relatively longer period of time in comparison to the period of lockdown. For example, if a contract to supply certain goods is for a three-year period, neither the supplier nor the receiver may be able to legally dissolve their contract owing to the jeopardization of their business caused by the lock-down. But if such contract is only for a period of a few months substantially coinciding with the lockdown, where time is the essence so as to render the goods useless beyond the lockdown period, then the parties may resort to the doctrine of frustration.

Even when dissolution of contracts may be legally impermissible, parties may certainly be entitled to temporary relief. Reliefs may vary in nature, including condonation of delay in performance of contractual obligations and extension of deadlines to meet fiscal obligations. Since the onset of Covid-19, the Indian courts have regularly entertained pleas for interim reliefs in special cases. The Bombay High Court in the Rural Fairprice Case (30.03.2020) restrained the creditor from selling the pledged shares of the borrower as a measure of recovery in view of the sudden and drastic fall in the share price triggered by the pandemic.

The Delhi High Court in Anant Raj Vs. Yes Bank (06.04.2020) held that the bank should not have classified a loan account as non-performing asset (NPA) when the default was attributable to the pandemic. The Delhi High Court in Ajay Kumar vs. IIFL Home Finance Ltd. (09.04.2020) allowed a family to reoccupy a floor in a property which had been securitised under the SARFAESI Act in the wake of the Covid-19 lockdown. The Delhi Court in Halliburton Offshore Services Inc vs. Vedanta O.M.P. (20.04.2020) stayed the invocation of bank guarantees owing to the Covid-19 crisis.

Several similar reliefs have been granted by various courts in these adverse times plagued by the vicious pandemic. Notwithstanding these court-granted reliefs, the law as it stands does not easily permit the dissolution of contracts or the absolution of contractual obligations. To sum up, one may win a few battles (temporary relaxations) but not necessarily the war (performance of contracts). Despite all analysis, at the end of it, the judge on a given day, depending upon his personal beliefs, empathy and conscience will apply the law on a case-to-case basis and write the fate of disputes. This article is a mere academic deliberation after all, and not the soothsayer’s word.

The writer is a practicing Advocate at Calcutta High Court and a visiting lecturer at West Bengal National University of Juridicial Sciences, Kolkata (WBNUJS). Opinions personal.