Will the Pegasus controversy give the Opposition some horsepower? 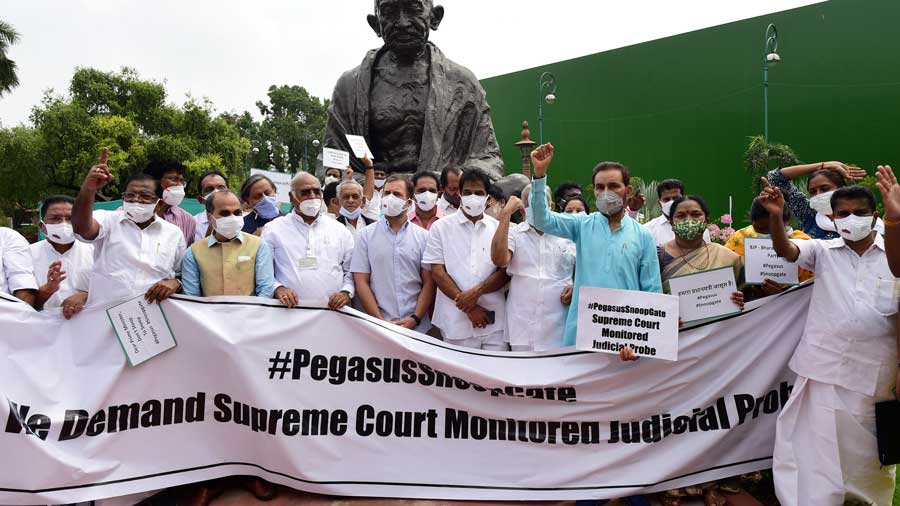 Congress leader Rahul Gandhi with party leaders, DMK and other parties MPs stage a protest near the Gandhi statue against Pegasus project, during the Monsoon Session of Parliament, in New Delhi, Friday, July 23, 2021.
PTI
Asim Ali   |   Published 24.07.21, 12:29 AM

The Pegasus scandal appears to be another milestone in the country’s descent into authoritarianism. The breadth of surveillance that has been uncovered touches almost every institution of India: Opposition parties, the media, non-governmental organizations, the judiciary and the Election Commission. Equally unsettling is its depth. Through this malware, the government gains a level of access to the private lives of citizens that would be beyond the wildest dreams of totalitarian regimes of the 20th century.

Taking the reasonable assumption that the government or its agencies are involved as only the government can access the spyware, the issue at hand goes beyond a violation of privacy. A surveillance regime of this kind undermines every substantive aspect of democracy: the rule of law, free and fair elections, freedom of expression and institutional autonomy.

Given the seriousness of the charges it faces, one might have expected to see a tarnished and tottering government à la the Nixon regime in the midst of Watergate. Yet, the government has reasons to be confident of surviving the scandal with minimal political damage.

The Opposition has two routes towards cornering the government on this issue, both of them riddled with difficulties. The first is forging a coalition of elites to take on the government. Since all segments of the power elite, including the media, businessmen and the judiciary, have been perversely affected by the surveillance, they have the motive to actively unite behind demands for accountability and redress. It must also be remembered that the list of names released is probably only the tip of the iceberg — one leaked list, in one time period, pertaining to one surveillance tool. The actual surveillance net likely ensnares a wider cross-section of elites.

However, this coalition of elites would be difficult to assemble in practice. The Supreme Court would unquestionably be interested in the name of an SC judge popping up among the list of the surveillance targets. However, if the Supreme Court decides to order a high-profile judicial enquiry, it would become embroiled in some difficult questions of its own.

One of the most important stories that came out of the leaks is the snooping on the woman (and her relatives) who accused the former Chief Justice of India, Ranjan Gogoi, of sexual harassment. Perhaps more importantly, a judicial enquiry into the matter might set the Supreme Court up towards the sort of frontal conflict with the political executive that it has repeatedly shown it wishes to avoid.

The media and business leaders might also be loath to confront the government. In one respect, what the Pegasus leaks represent is the portrait of an all-powerful State. The sense of fear that partly accounts for the self-censorship of the media and compliance of business houses would, therefore, only become more potent with the leaks.

There would have conceivably been countless journalists, civil servants, activists and businessmen wondering over the past few days whether they too have been hacked. This paranoia has the potential to weaken more spines than it stiffens into action. In some respects, fear is an effective instrument for maintaining conformance. It has its limitations, though, as would be explained later in the article.

A second route for the Opposition entails building popular support against government surveillance. This course is an even steeper climb.

The political messaging against government surveillance comes up against two barriers. One, people aren’t sure how government surveillance affects their lives. As any activist flagging the surveillance potential of Aadhar or the proliferation of CCTVs in public spaces would attest to, privacy issues have little purchase among the broader public. Further, the supposed target of surveillance in this case is not even them but the elites.

The second barrier is the overweening cynicism that since this is the practice common to all governments, there is nothing important in any new revelation. This cynicism is, moreover, not without basis. An RTI application filed during the UPA years revealed that, on an average, permission for 7,500 to 9,000 phone interceptions were issued every month by the home ministry under the Indian Telegraph Act.

Despite the continuities with previous surveillance regimes, the Pegasus scandal is still unprecedented in some sense. This is not just because of the sweeping and high-tech nature of the surveillance, the unloading of an imported ‘cyber-weapon’ by a government against its own citizens. It is also because the ends of surveillance are purely partisan — aimed almost exclusively at opponents of the government or journalists working on stories damaging to the Bharatiya Janata Party — with little relation to any conception of national security. It is also not clear if the surveillance even passes the minimum test of formal legality since there is no legal provision allowing hacking by State agencies.

However, since most political parties have been complicit in State surveillance of some sort when in power, they have trouble surmounting the question of credibility when in Opposition. The nuances of different surveillance regimes do not translate neatly into political rhetoric. A deeper malaise is the failure of the political system to nurture any intellectual tradition or political discourse connecting surveillance with the curtailment of civic and political freedoms.

This is why allegations of surveillance have rarely led to any political accountability. There are two exceptions to this rule. One, the resignation of the former Karnataka chief minister, Ramakrishna Hegde, owing to charges of spying on the calls of his political adversaries. And, two, the fall of the Chandra Shekhar government after a controversy involving police surveillance of Rajiv Gandhi.

But even in these cases, the fallout owed more to political machinations rather than public disgust. In the case of Hegde, the spying scandal was merely an axe used by his party rivals, such as Chandra Shekhar and Deve Gowda, to oust him from office. Likewise, the presence of two plainclothes constables outside Rajiv Gandhi’s residence was a patently absurd pretext used by the Congress to pull the plug on the Chandra Shekhar government.

Therefore, the Narendra Modi government might well feel emboldened to believe that this latest scandal would soon blow over notwithstanding the usual domestic criticism and international embarrassment. However, the Pegasus scandal reveals a deeper vulnerability of the Modi government, common to many regimes with an authoritarian bent. It is the over-reliance on fear and coercion as a mechanism for ensuring the support of the elites. When Modi came to power, he had managed to generate considerable enthusiasm among large parts of the media, business, and even intellectual elites. Meanwhile, the BJP and the RSS had also for decades cultivated influential members of the Indian elite, making inroads into the constituency through the politics of persuasion.

The political imagination of the BJP leadership is now restricted to electoral success underpinned by an extraordinary electoral machine. As long as the party can hold on to its popular support on the basis of majoritarian ideology and the personality cult of Modi, the elites can be bent to the leadership’s will using the fearsome power of the State.

However, the reliance on fear to the exclusion of the give-and-take of politics has its limitations. The brazen use of investigative agencies against Opposition parties has not prevented the loss of key allies such as the Shiv Sena and the Shiromani Akali Dal in recent years. The remarkable centralization of the party, coupled with demands of unquestioning loyalty, has also weakened party structures. That the coercive strategy of the top leadership extends to the party itself was made starkly clear from the Pegasus leaks as BJP leaders and their aides were also the alleged targets of surveillance.

The rumblings of the elites under the surface could be seen during the second wave of the pandemic. As Modi’s popular support witnessed an ebbing, institutions such as the media and the judiciary asserted their independence and took the government to task. However, the reflex of the top leadership to any political insecurity is to double down on the coercion, its primary language of governance, thus creating even more underlying resentment. This is not a recipe for long-term dominance, which requires a degree of co-option of the elite based on loyalty and common interest.

As the monsoon session runs its course, the really damaging punches to the government are likely to be made over its failures on the issues of price rise, pandemic and farmers, not the issue of surveillance. Yet, it is the growing authoritarianism of the government, highlighted by the Pegasus scandal, that is at the root of what afflicts the country.