Advertisement
Home / Opinion / Why is the BJP so focused on Rajnath Singh while sidelining other senior leaders?

Why is the BJP so focused on Rajnath Singh while sidelining other senior leaders? 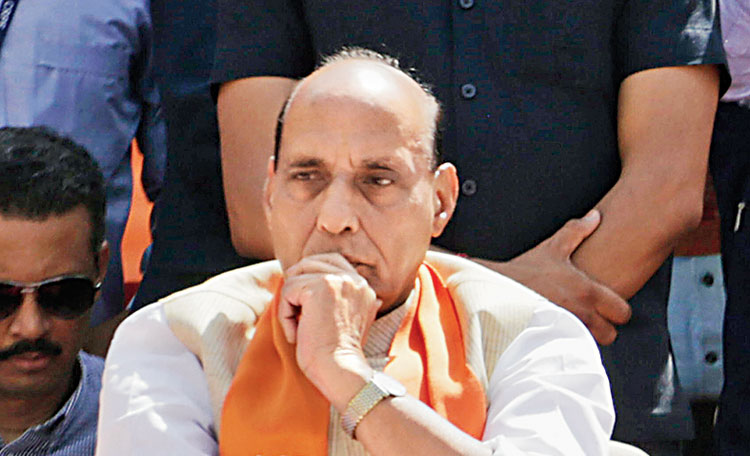 Union home minister Rajnath Singh seems to be getting a lot of importance in the run-up to the general election, as he is being utilized widely by the BJP for campaigning
The Telegraph file picture
The Telegraph   |   Published 07.04.19, 11:28 AM

In a party where everybody is virtually a nobody save for the prime minister, Narendra Modi, and the Bharatiya Janata Party chief, Amit Shah, the Union home minister, Rajnath Singh, seems to be getting a lot of importance in the run-up to the general election. He is being utilized widely by the BJP for campaigning. The saffron party’s media department provides regular information about the rallies that Singh is scheduled to address. Party insiders claim the leader, who hails from the heartland of Uttar Pradesh, has managed to procure tickets for a significant number of his loyalists.

The reason behind Singh getting such importance at a time when other senior leaders are being systematically sidelined has been discussed in hushed voices in the party corridors. Many feel that the Modi-Shah duo is doing the clever thing by not taking on all the key leaders of the party at the same time, as doing so could spark a revolt within the BJP. The turn of Singh, Nitin Gadkari and Arun Jaitley to be edged out will come after the Lok Sabha elections this year are over, and will depend on the margin by which Modi will win, according to some party leaders. If Modi returns with a big mandate — like the one he got in 2014 — then these leaders could find themselves on the margins sooner than later. So says the buzz in the BJP.

The Gandhi siblings, Rahul and Priyanka, who have guarded their personal lives rather zealously for years, are now putting themselves out in the public domain in more ways than one. On Friday, Rahul Gandhi told a gathering of college students that his sister ties a rakhi on him and he does not remove it till it wears thin and falls off. He showed them his wrist. Priyanka’s festive greeting kept up the spirit of sharing personal details. She posted a picture of a New Year’s thaali and said that it was her mother who reminds her dutifully to make it. “I had no time to make my thaali yesterday but came home after road show and found it placed on the dining table. How sweet are mom’s? [sic]”

Still with Priyanka Gandhi. A section of BJP and Rashtriya Swayamsevak Sangh leaders created an uproar in Varanasi after Priyanka Gandhi entered the Kashi Vishwanath temple to worship the lord Shiva. They argued fiercely that a first information report should be filed against the priest who conducted the puja, as well as Priyanka, who they claimed is a Christian and eats non-vegetarian food. While Priyanka is not a Christian, there is no bar on those who do not belong to the Hindu community from entering the temple. The clamour died down as people confronted the RSS-BJP leaders with a simple question: how many politicians and the thousands of devotees coming to the temple daily are strictly vegetarian and avoid the consumption of liquor?

One of the people questioning the saffron protesters also asked why there should be a ban on Priyanka when students from the Banaras Hindu University and tourists — many of them Muslims, Sikhs and Christians — come to the temple in hordes and offer prayers without obstruction. Bigots, however, do not give up easily, and an advocate filed a complaint before the judicial magistrate, naming Priyanka and the priest, Rajan Tiwari, for hurting the religious sentiments of millions of Hindus. The date of the hearing has fallen on April 12.

The recent blog post by the BJP patriarch, LK Advani, taking swipes at the Narendra Modi-Amit Shah regime, came as a shock to party managers in Delhi. They smelled a conspiracy on the eve of the polls. The BJP’s media department said it had no information and indicated that there was no chance of an official reaction to the issue. Everything, however, changed soon. The PM swiftly tweeted Advani’s blog, seeking to turn the senior leader’s attack into praise: “Advani Ji perfectly sums up the true essence of BJP, most notably the guiding Mantra of ‘Nation First, Party Next, Self Last.’” He even called Advani a “great” leader. Modi chose to ignore Advani’s observation that the BJP had never treated its adversaries like “enemies” or “anti-nationals”. A little later the media department officially released Advani’s blog as a “press release”. Party leaders hailed Modi and said the ‘disciple was smarter than the guru’.

Rahul and Priyanka Gandhi planned to set up a few fierce encounters in the elections, and Lucknow, where the BJP veteran, Rajnath Singh, is in the fray, was chosen as one such constituency. Priyanka told the young Jitin Prasada to contest against Singh. He somehow wriggled out of it. The Congress then approached Kapil Sibal, who has enough resources and fame to make things difficult for Singh. Sibal was excited initially, as winning Chandni Chowk in Delhi looked difficult without an understanding with Aam Aadmi Party. But he soon found out that defeating Singh was not easy. He opted out. The top Congress leader from UP, Pramod Tiwari, also expressed his unwillingness. This has caused much consternation in the high command, which has not been able to finalize the candidate for the prestigious Lucknow seat so far. Its plan to set up a contest like Amritsar in 2014, when Amrinder Singh felled the BJP stalwart, Arun Jaitley, in spite of the ferocious Modi wave, is now in jeopardy.

Rahul Gandhi's entry in Kerala: A shake-up for the BJP
The Telegraph file picture

Rahul Gandhi’s entry in Kerala, however, has shaken things up for the BJP, which was eyeing its first Lok Sabha seat from the state by trying to capitalize on the Sabarimala temple issue and improving its vote share. It even switched its candidate. While BJP supporters expected a party heavyweight to take on Rahul, all they got was a lightweight like Tushar Vellapally, the president of the Bharat Dharma Jana Sena, a little known ally in the National Democratic Alliance that is no match in the fight between the Congress and the Left. Looks like the BJP will now have to pray for some ‘Modi magic’ to win in the Congress bastion.