Advertisement
Home / Opinion / Why BJP is playing along with Paswan Junior

Why BJP is playing along with Paswan Junior

DELHI DIARIES: In the land of prohibition, Nitish tries to push for 'neera' without success 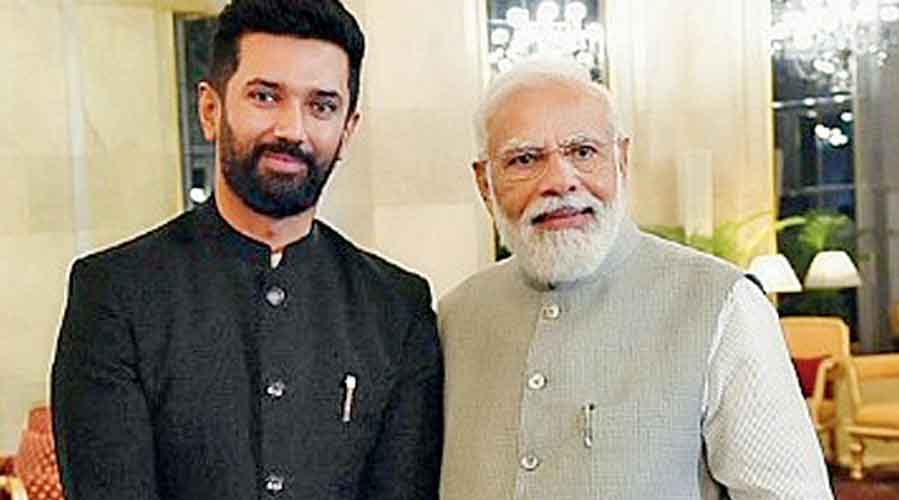 Chirag Paswan continues to stay put in the 12 Janpath bungalow that had become synonymous with his late father, Ram Vilas Paswan. The Narendra Modi-led government had served him a notice to vacate the bungalow in August last year. But Chirag wanted the sprawling house to be allotted to him as a member of parliament from the Lok Sabha. However, rules didn’t permit this as he is not entitled to get a house meant for ministers. The government, though, is not pushing the Lok Janshakti Party MP to vacate. The LJP that had been headed by Paswan Senior has since split with Chirag’s uncle walking away with five of the six MPs, joining the ruling National Democratic Alliance and becoming a minister in the Modi government. Despite this, the Bharatiya Janata Party is not keen on closing the door on Chirag and is thus not pursuing the bungalow vacation notice. In November last year, Chirag had even met the prime minister and posted a picture of the meeting. The buzz in the BJP corridors is that the party doesn’t want Paswan Junior to join hands with Tejashwi Yadav of the Rashtriya Janata Dal.

As the prohibition rages on the ground and the liquor mafia rampages underground across Bihar, the chief minister, Nitish Kumar, thundered at one of his recent rallies that anybody feeling thirsty could take a swig of neera (unfermented palm sap) instead of toddy (fermented palm sap, which is intoxicating). He gave a discourse on its health benefits, claiming that even Mahatma Gandhi consumed it. The CM announced up to one lakh rupees in financial assistance and Rs 1,000 for seven months to toddy tappers who start collecting and selling neera. He also suggested that any unsold drink could be used to make jaggery and sweets. But he found no takers for the offer. Similar announcements and projects for neera drinks, jaggery and sweets have failed to take off before. Toddy tappers are also making a fast buck, especially in rural areas, ever since prohibition was implemented. “Its just a matter of a few hours. It is neera before sunrise, but gives a good kick as toddy if you wait for five to six hours. Its demand is high and it is sold out in no time,” a toddy tapper revealed.


There are more reasons for the Bihar CM’s woes. He is facing tough competition from his ally, the BJP, when it comes to his ‘social reform campaign’ — a statewide tour against liquor, dowry and child marriage. The legislative assembly Speaker and senior BJP leader, Vijay Kumar Sinha, is also traversing the state under the pretense of carrying out a ‘social pledge campaign’ against addiction, crime, child labour, child marriage and dowry. He has also added hygiene, yoga, ayurveda, water and heritage conservation, and employment generation, among other things, to his campaign list. Although Nitish Kumar’s campaign is a government initiative, Sinha’s tour is backed by the BJP.

How much of an impact these grandstanding tours will make is a bone of contention in political circles, but pundits agree that both leaders are perhaps trying to strengthen their images and positioning themselves for the future — Nitish as the supreme leader in Bihar and a contender for the top job in the country, and Sinha as the BJP’s chief ministerial candidate. Unfortunately, Omicron has left both of them in suspended animation. But everybody knows that things will pick up once the third wave passes.

Allegations regarding the presence of Rashtriya Swayamsevak Sangh cadre and supporters in the Kerala police has been a cause for worry for the Left Democratic Front government. After the Communist Party of India leader, Annie Raja, dropped the bombshell a few months ago, the Communist Party of India (Marxist) state secretary, Kodiyeri Balakrishnan, admitted that the matter deserves attention. However, he was careful not to blame the CM, who holds the home portfolio. Yet, the very admission, that too in an article in the party organ, Deshabhimani, is tantamount to accepting the reality. While Balakrishnan claimed that the CM, Pinarayi Vijayan, has already said that such elements won’t be tolerated in the police force, what he didn’t clarify was how they would be tackled. Some Left parties also want to know how RSS supporters gained entry into the police force.

The BJP national general-secretary, CT Ravi, seems to be a man who does not have a grip on his tongue — or his keyboard. The rabble-rouser came up with a scathing tweet after the security breach that the PM’s convoy faced in Punjab.
“Desh Ke Gaddaron Ko Goli Maro!” — came the instant reply from the man who never misses a chance to shoot barbs.

The BJP MP from Bhubaneswar and national spokesperson, Aparajita Sarangi, now has another feather in her cap. She is being honoured with a DLitt and the Shri Saraswati Samman by the MIT Art, Design and Technology University in Pune. The Odisha CM, Naveen Patnaik, has been similarly honoured earlier. Aparajita, an IAS-turned-politician, has managed to show the critics from her own party in Odisha that she is far superior to them. With the PM recently describing her as the rising star of the party, her political value is growing. She is emerging as a potential threat even to the Union minister, Dharmendra Pradhan, who still calls the shots in Odisha BJP.