Advertisement
Home / Opinion / Why are we so easy on our legislators?

Why are we so easy on our legislators?

MPs should be tested on the Indian Constitution 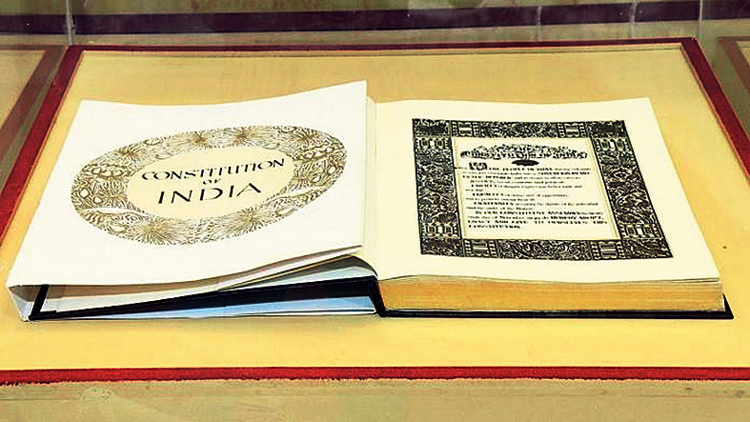 Sir — Children are often taken to task for not knowing their lessons well. Why, then, are we so easy on our lawmakers who seem to be ignorant of even the basic tenets of the Constitution — secularism and equality, for instance — that they vow to uphold? Legislators should be made to take tests on the Indian Constitution. If they fail, they should be barred from entering Parliament. All of them should learn about the nation before claiming to be champions of ‘nationalism’.

Sir — We, the students, scholars and alumni of the University of Oxford, are in solidarity with students exercising their fundamental right to dissent and protest across India.We condemn the violence unleashed on students in Jamia Millia Islamia, Aligarh Muslim University, Delhi University, Cotton University and other educational institutions. The use of police force against students exercising their fundamental right to protest in university spaces and elsewhere is a direct attack on the foundations of a democratic society. We demand an immediate end to all forms of violence against the protesting students and call for accountability of those responsible.

Over the last week, we have seen many peaceful protests and demonstrations across India against the Citizenship (Amendment) Act, 2019. The Act stipulates preferential treatment to religious minorities from Pakistan, Bangladesh and Afghanistan in the process of acquiring Indian citizenship, while explicitly excluding Muslims from its purview. This explicit and blatant exclusion of Muslims from citizenship upends the long-standing fundamental ideals of equality, liberty, pluralism and secularism enshrined in the Constitution. We lend our voices in support of the fight against this immoral and unconstitutional law and call for its immediate withdrawal.

As we watch with extreme concern the events unfolding in India, we lend our unconditional support for the students and others peacefully taking to the streets to fight injustice.

Sir — It was shocking to see the police enter a university without permission in a democratic country and beat up the students (“Jackboots in Jamia”, Dec 16). The extent of police brutality is evident from the photographs and reports. One must find out who ordered the police to commit this deed. This shameful act must be condemned by everyone who believes in democratic values.

Students are the future of the country. The government is expected to educate and protect students the way parents raise their children. The dignity and care with which a country treats its students reflects on its development.

Sir — On May 4, 1919, a few thousand students from colleges in Beijing had organized a mass demonstration against the decision to hand over the Shandong province of China to Japan. That was a turning point in China’s history; many even consider it to be the beginning of the Chinese Revolution. The protests by students across India, cutting across ideological, religious and other divides are reminiscent of the May 4th movement. It is a matter of pride that the protesters refused to be cowed down by the violence unleashed upon them by the law enforcement agencies.

There are some important points that people who have chosen to raise their voice should remember. Those detained have the right to know why they have been arrested, to not face unnecessary physical restraint, not be forced to sign any paper or bond. They are also legally allowed to access a lawyer, request medical assistance and see a magistrate within 24 hours of arrest. Women can only be arrested after sunrise and before sunset by female officers.

There is no guarantee that a brutish force with no qualms about firing at unarmed students will ensure that these rights are safeguarded. Yet, a thorough knowledge of one’s legal rights can end up saving lives. It is also crucial that practitioners of law lend their services to those wrongfully detained — many of whom cannot afford legal help — free of cost. Such an action, too, can be considered a service to the nation.