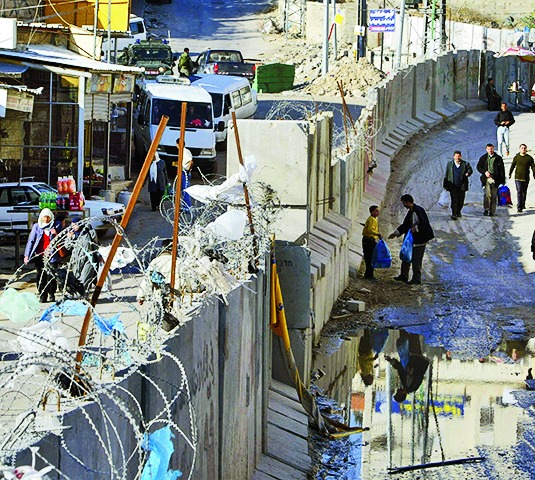 The issue of Israel and Palestine has turned out to be so intractable that no one seems to grasp its full complexities - those in the midst of the problem miss the wood for the trees; those on the outside miss the trees for the wood. It is an issue on which it is very difficult to not take sides, and impossible to take the same side all the time. Was it right (as the Arabs ask) to let the Jewish population of Europe settle down in Palestine, inhabited for centuries by a much larger Arab population? Do the Jews have a historical entitlement to the land of Palestine (as the Israelis tend to ask), where the Jewish kingdoms of Judea and Samaria used to be? If you answer 'no' to the first, then it is almost axiomatic that you find in favour of the Arabs and declare the state of Israel illegitimate; if you answer 'yes' to the second, then you lean towards the Zionists and argue for the legality of their state.

There is no doubt that the state of Israel was fought for and put together by Jews coming largely from Europe, driven away by heightened persecution culminating in the Holocaust - it is difficult to argue with the position that the fight for Israel was a fight for survival. There is equally no doubt that the creation of Israel turned out to be a Nakba (catastrophe) for the Arab people of Palestine, who were dispossessed, regardless of whether they had been driven out or squeezed into ever reducing pockets in their own land. The two sides - Israelis and Palestinians - have remained locked in conflict ever since the state of Israel came into being: unwilling to live together, and unable to live without each other.

The book under review deftly bypasses the question of whether the Jewish state is legitimate or not. It focuses instead on the multiple forces of circumstance that pushed Palestine into the present situation. For the period before 1948, therefore, the book focuses on the push-factors driving Jewish emigration to Palestine from Europe; the lack of any definitive position in London on whether Jewish 'homeland' means Jewish 'state'; the grim determination of the Jewish emigrants to insulate their social, cultural and economic life from their Arab neighbours, and the Arabs' resentment at being dispossessed of their lands that began to turn into violent resistance to further Jewish inroads. For the period after 1948, the account revolves around Palestinian resistance to the existence of Israel; support of the other Arab states of the Palestinian cause; the misery of the Palestinians under Jewish occupation, and the inability of the Jewish State to accord Palestinians equal treatment as envisaged in the Oslo Accords.

The author, Ian Black, happens to be an outsider who has seen into the issue from up close. In over 35 years of his association with The Guardian newspaper, initially as its Jerusalem correspondent and then holding multiple editorial positions, Black witnessed first-hand some of the more momentous developments in the region during those years, and cultivated a deep interest in the Israel-Palestine question - this being his third book on a related issue.

Unlike most other journalistic accounts of the matter, Black brings to the table a historical perspective that is most unusual. In plotting the steady increase of the Jewish population in Palestine, the resistance of the Palestinians to such continual growth, the success of the Jews in 1948 in creating their state, and the conflictual relationship they have had with the Palestinians ever since, he has refrained from dividing the narrative neatly into a few short periods (in decades, or quarter centuries). Instead, Black uses each chapter dealing with short phases (varying from one year to 10) to make the case that the trajectory of the way in which the problem of Israel and Palestine evolved showed a large degree of oscillation - things improve for a few years, then stumble onto a roadblock, head towards a catastrophe, then pull back only to stumble yet again. There was, Black correctly seems to argue, no element of inevitability in the manner in which the Israel-Palestine question has unravelled into what is a tragedy of enormous proportions on either side - a line that reminds the reader of a co-author of one of Black's earlier books, the revisionist Israeli historian, Benny Morris.

Like the good journalist that he is, the author is at his best in short sketches of some of the protagonists of this unending tragedy - Chaim Weizmann, David Ben-Gurion, Moshe Dayan, Ariel Sharon, Yitzhak Rabin, Yasser Arafat, Shimon Peres. He is also brilliant in putting together numerous short sketches of many of the protagonists, victims and contemporary observers of the unfolding tragedy that are almost completely absent in most of the huge volume of academic literature that exists on the subject. He also very competently brings out the synergic relationship between Jewish and Palestinian economies, between Jewish industry that sustains Palestinian economy with its demand for cheap labour, and Jewish (often illegal) access to Palestinian land and labour that sustains the economy of Israel. These attributes alone virtually guarantee this book a long shelf-life among the ready reckoners on the Israel-Palestine question.

And yet, in spite of the sad sense of fulfilment that any reader would have upon finishing this book, there is also a major weakness that it suffers from. A few crucial questions pivotal to the issue are left virtually unexplored. The question, how did the nature of land and tenancy rights in Ottoman and Mandatory Palestine lay the foundations of the property rights in Israel and how have they been used to deny the basic civic and economic rights even to the Israeli Arabs, barely gets a mention. Neither does the book explore the continuities that existed between the emergency provisions of Mandatory Palestine and the state of Israel, and how these have been deployed at the expense of the rights of the Palestinians. Understanding these structural continuities is crucial to one aspect of the Arab-Israeli saga that the author has otherwise dealt with at length: how the Jewish democracy is actually democratic towards its Jewish citizens and Jewish towards its Arab subjects.