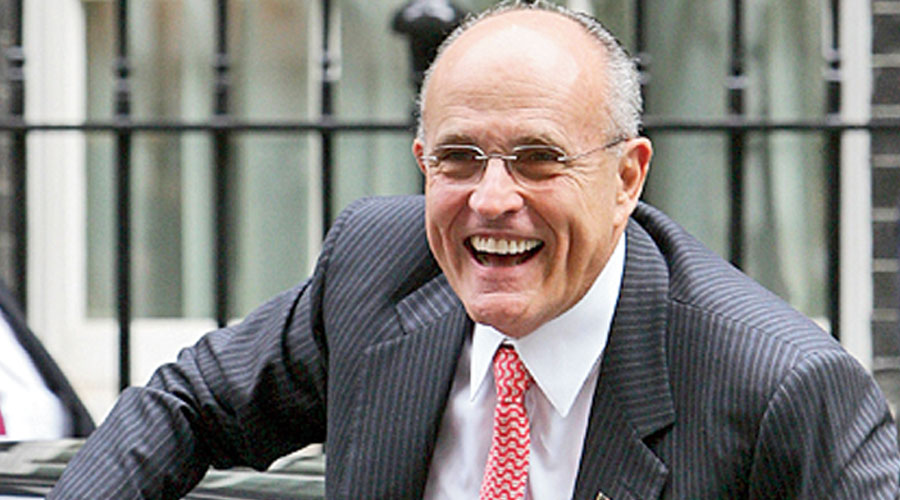 The former president of the United States of America, Donald Trump, and his supporters are still popping up in the news, and for all the wrong reasons. Recently, Trump’s erstwhile personal lawyer, Rudy Giuliani, who never fails to elicit ridicule from the press, was revealed — literally — to be a contestant on the popular reality singing show, Masked Singer.

In this show, celebrity contestants come on the stage in costume and, if they lose the round, they take off their masks. However, two of the judges, Ken Jeong and Robin Thicke, quickly left the stage when Giuliani revealed himself. The other two judges stayed on and engaged in light banter. Although nothing has been revealed yet about Giuliani’s costume or what his song was, viewers will be able to watch the episode when it airs next month.

The situation is similar to that of Trump’s former press secretary, Sean Spicer. Spicer was also mocked by the press when he quit his job at the White House during Trump’s presidential term and joined as a contestant on Dancing With the Stars, a popular reality TV dance competition. Interestingly, Masked Singer is produced by the Conservative network, Fox News, which had frequently hosted Giuliani in the past.

There was a block of pure gold sitting in the middle of Central Park and nobody was quite sure what to make of it. The German artist, Niclas Castello, created this artwork made out of 186 kilogrammes of pure 24-karat gold, rendering the piece worth just under $12 million.

Castello’s team said that the cube was made in a special, custom kiln in Switzerland that could provide the high temperature needed to support this density of gold. The cube itself is 1.5 feet in dimension with quarter-inch thick walls. It was kept at the park for the entire day, with heavy security, of course.

The artist used it to promote a new cryptocurrency called Castello Coin launched by him. After the cube was removed, it was apparently put on display at a private dinner on Wall Street to launch Castello’s new NFT.

Many were wondering about the real purpose behind the installation, and how an artist had access to $11 million worth of gold. Some remarked on social media about the morality of displaying a large piece of gold in Central Park, a place where many homeless people take shelter. A Twitter user joked, “I think we can all agree what the world needs now is an $11 million medium-sized cube that has something to do with cryptocurrency.”

Castello said that he was trying to“create something that is beyond our world — that is intangible.” This is ironic because gold is one of the most tangible things in the world.

The month of February is known as Black History Month — a celebration of the achievements and contributions of African-Americans and their central role in American history. BHM originated in September 1915, half a century after the 13th Amendment abolished slavery in the US. But it became officially recognized only in 1976. Every year, the commemoration of the BHM has a theme; the theme for 2022 is Black Health and Wellness.

Unfortunately, this year’s celebration comes on the heels of active protest from politicians against teaching schoolchildren the ‘uncomfortable’ parts of history such as slavery, segregation or racism. Shockingly, a legislation has gone right up to the White House asking to ban teachers from discussing these topics in class. Virginia’s governor even created a phone tip line for parents to report educators for teaching critical race theory in class.

This is contrary to the observance of the BHM, which includes pushing for equality by encouraging people to learn about the history of the Black community, shop at Black-owned businesses and engage with Black creators. Apple, for example, launched a campaign highlighting exclusive content created by Black voices in their music and podcasts.

The indoor workout-cycling company, Peloton, won the hearts of many Americans over the pandemic. The Wi-Fi-enabled stationary bike offers live-streamed workout sessions and is endorsed by celebrities such as Richard Branson and the Obamas. But now, the sleek bike with the $2,245 price tag needs to pump the brakes. In the span of two months, two TV show characters were seen falling off their Peloton bikes at home. The first one was Mr Big from the HBO reboot of Sex and the City, where the character is killed off after being seen riding a Peloton and suffering a fatal heart attack. This led to a 15 per cent drop in Peloton’s stocks.

In the second case, a character on the popular TV show, Billions, suffered a heart attack while riding the bike. After two back-to-back PR nightmares, Peloton announced that it was laying off 3,000 of its employees and the CEO would step down. Rumours are rife that Amazon or Nike are likely to acquire the company.

The Oscar nominations for 2022 were released with content from many streaming services receiving best category nominations. The latest Spider-Man movie, which is the fourth-highest-grossing film of all time, received a visual effects nomination. On the other hand, Beyonce received her first-ever nomination for her single, “Be Alive”, for King Richard. No word yet on who will host the show this year though.