When no comment leads to murmurs in corridors of power

DELHI DIARIES: Why praise for rivals in Delhi, UP and the temple question in Kerala rattle Congress 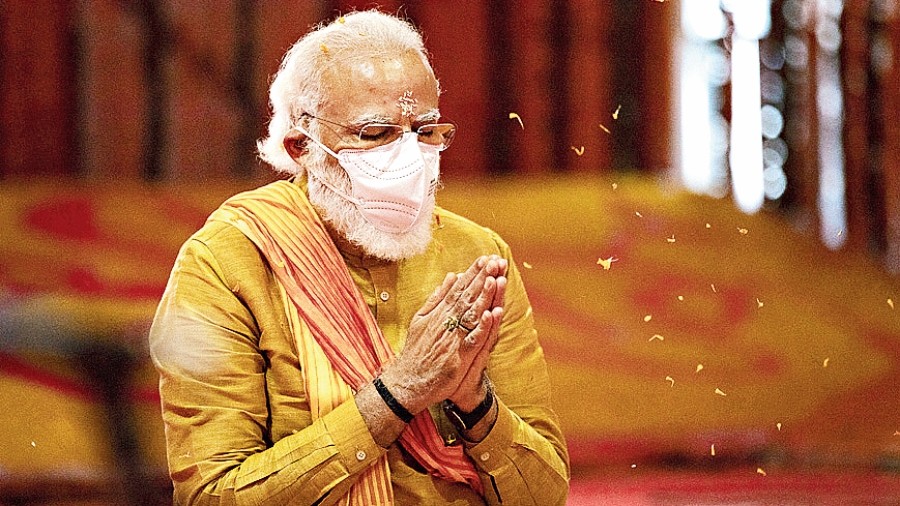 The “bhoomi pujan” or site-worship performed by the prime minister, Narendra Modi, this week that laid the ground for the construction of the Ram temple in Ayodhya has gripped the imagination of the ruling Bharatiya Janata Party like no other event. Party leaders and cadres believe that with the bhoomi pujan the foundation of a ‘New India’ or ‘Bharat’ has been laid by the prime minister. The party was so intoxicated by the celebrations for the upcoming temple that it seemed to have completely forgotten to tom-tom the first anniversary of the abrogation of Article 370 in Kashmir, that fell on the same day. It was, however, taken up by the party the day after, on Thursday. The interesting part was that the two top leaders of the BJP maintained absolute silence, making no reference at all to this massive achievement in their tweets.

The abrogation of Article 370 was one of the core ideological commitments of the BJP, much older than the promise to retrieve the Ram Janmabhoomi. The silence of Amit Shah, who piloted the proposal in Parliament and earned the sobriquet of the new ‘Iron Man of India’ in the party circles, was more confounding. Shah is currently in hospital after testing positive for Covid-19, but his Twitter handle is active. But while he tweeted on the Ram temple and other issues, when it came to Article 370, he made no comment. This silence has led to all kinds of murmurs in the corridors of power.

The Amul girl, who survived by taking a dig at successive governments, seems to have decided that discretion is the better part of valour. Or so it would seem from some of the recent advertisements where she appears not just mellowed but also in sync with the BJP government. The latest example is the advertisement that coincided with the bhoomi pujan in Ayodhya. Over the past few years, the young lady has come out in support of the Modi government’s moves in Kashmir as well as on ‘surgical strikes’, leaving the jibes for individuals in the ruling regime rather than the dispensation as a whole.

Yet another storm has begun to brew in the teacup of Indian politics. At a meeting between Rahul Gandhi and Congress leaders from Bihar on Thursday, the Rajya Sabha parliamentarian, Akhilesh Prasad Singh, was said to have praised the good work of Yogi Adityanath and Arvind Kejriwal in controlling the coronavirus situation while criticizing the pathetic performance of Nitish Kumar. Although Singh has commended the work of governments in Congress-ruled Rajasthan and Chhattisgarh too, many leaders present in the meeting — it was held via video-conference — had a tough time digesting the good words that the party MP used for Adityanath and Kejriwal.

While some were of the opinion that praising bitter rivals could have been avoided, others argued that the assessment itself was flawed because both Uttar Pradesh and Delhi have failed in the management of the pandemic. Nobody countered Singh’s claims at the meeting, but some leaders took them so seriously that they complained against them to the central leadership. They said that in the light of the UP chief minister ruthlessly targeting the Congress and Priyanka Gandhi Vadra being locked in a bitter fight with him, a Congress MP praising his work is naïve and politically problematic. With respect to Kejriwal, one Congress leader said that “his crime is the worst as people were left to fend for themselves despite Delhi having the best healthcare infrastructure in the country”. Several Congress leaders said Kejriwal was primarily responsible for thousands of people from Bihar having to walk back home following the lockdown. What is interesting is that many of these leaders are upset with Singh for his pro-Bhumihar politics in Bihar. That he has come from the Rashtriya Janata Dal and acquired a dominant role in the Congress is another grudge prompting these belligerent responses.

Never have Cauvery and Krishna, the official residence and home office of the chief minister of Karnataka, looked so deserted. Ever since BS Yediyurappa and six of his personal staff tested positive for Covid-19, these two iconic buildings have remained closed. The outbreak of Covid-19 had already reduced the number of visitors when Yediyurappa landed in hospital. With some in the BJP taking this as a bad omen, it is being speculated that it would not be a surprise if the highly superstitious chief minister decides to spend most of his days now on at his private home in the city.

Supporting the Ram temple construction has put the Congress on the defensive in Kerala. With some  senior leaders like Priyanka Gandhi Vadra, Digvijay Singh and Kamal Nath lauding the move, Kerala’s highly vocal Congress leaders, Ramesh Chennithala and Mullappally Ramachandran, among others, reportedly had to dodge journalists’ questions on the issue continuously. This gave the ruling Left Front a means to checkmate the Congress and its allies. Some Congress leaders privately admit that they should not have stuck their necks out.