What’s in a name: Namesake candidates in polls

Sometimes the presence of namesake candidates might destabilize the equation for the mainstream political parties, although not in most of the cases 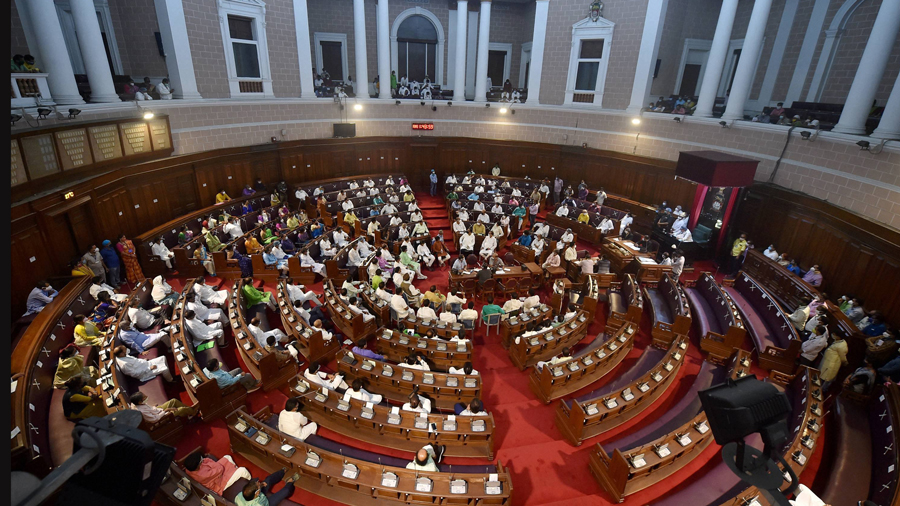 A view of West Bengal Legislative Assembly without oppositions MLAs during announcement of the the name of the Assembly Speaker, in Kolkata, Saturday, May 8, 2021.
PTI
Atanu Biswas   |   Published 11.05.21, 12:10 AM

One of my friends, a voter of the Bidhannagar assembly constituency, was amazed when he discovered that both the Trinamul Congress and the Bharatiya Janata Party candidates of the constituency had namesakes in the candidates’ list, both independent candidates. Candidates with the same or similar names from different parties or as independents contesting from the same constituency is not uncommon. This might create confusion among less discerning voters. Are these candidates really ‘independent’, in the true sense of the term, and their candidature mere coincidence? And, can they really influence an election?

In 2004, the Congress candidate, Vylopally Mama Sudheeran, better known as V.M. Sudheeran — who went on to become the state president of the Congress in Kerala — was defeated by the CPI(M)-backed independent candidate, K.S. Manoj, by 1,009 votes in the Alappuzha Lok Sabha constituency. But the man who was instrumental in this was Virippukandathil Sreedharan Sudheeran who garnered 8,332 votes as an independent candidate. “I have been a Communist since my childhood. My friends inspired me to submit the nomination as a namesake and they pooled in the money for the deposit. But I never thought that I would garner that many votes,” V.S. Sudheeran said later. Interestingly, this happened in a state like Kerala with a high literacy rate.

This is not an isolated event. The namesake menace haunted Kerala’s poll scene even this time. In the 2021 assembly elections, C.P. Cheriya Mohammed, the United Democratic Front candidate in Thiruvambady, had a namesake opponent, K.P. Cheriya Mohammed; and the Left Democratic Front candidate, Linto Joseph, too, had a namesake. This is actually a trend almost everywhere in the country. Even the high-profile Varanasi constituency saw Narendra Nath Dubey Adig of Jan Shakti Ekta Party and the candidate, Narendra Bahadur Singh, while in Vadodara, the independent candidate, Narendra Babulal Modi, had joined the fray against the Bharatiya Janata Party’s prime ministerial candidate, Narendra Modi, in 2014.

In the same Lok Sabha elections, the luck of the Aam Aadmi Party candidate, Bhagwant Mann, from the Sangrur constituency of Punjab was tested when his namesake, Bhagwant Singh, released an advertisement in a Punjabi newspaper requesting people to vote for him on the ‘kite’ symbol: “Aap de Bhagwant wallon appeal (An appeal by your Bhagwant)”. His full name was not mentioned in the advertisement, which focused on voting against corruption, scams, unemployment and inflation — the issues Mann had raised during his campaign. The luck of Thol Thirumavalavan of the Viduthalai Chiruthaigal Katchi party was tested too. He turned out to be less lucky than Mann — he lost the Kattumannarkoil constituency of Tamil Nadu in the 2016 assembly elections by a mere 80 votes or so to All India Anna Dravida Munnetra Kazhagam’s N. Murugumaran. The independent candidate of Thirumavalavan’s namesake, however, bagged 289 votes in the election.

Sometimes the presence of namesake candidates might destabilize the equation for the mainstream political parties, although not in most of the cases. Some believe that fielding namesakes is a dirty trick in electoral politics. But, it’s an unsolved mystery whether the Opposition parties field such candidates against their primary rivals to cut votes, at least sometimes, or the namesakes themselves get tempted to fight the elections. The number of such namesakes in elections, however, seems to be way more than can be explained by mere probability. An election is a battle, and there’s no rule to prevent a candidate from contesting an election simply owing to the same or a similar-sounding name as that of a heavyweight candidate. Rather it illustrates how easy it is to hoodwink the electorate in the Indian system, even if it is intentional sometimes. Is this a weakness of our democracy? The political parties concerned possibly know it well.