Is it fascism versus corruption this poll season in Bengal then? 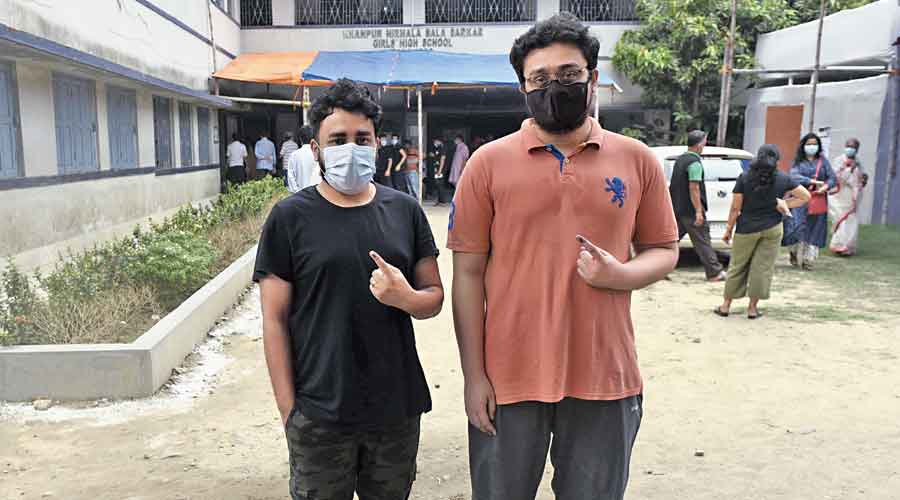 Two young voters after casting their votes at a polling booth in the Bansdroni area, under the Tollygunge Assembly constituency.
Telegraph file picture
Agnideb Bandyopadhyay   |   Published 12.04.21, 02:16 AM

‘This is your first time. There’s still a lot to know.’ As a first-time voter, about to experience the reality of the electoral set-up, this sentiment questions every bit of knowledge I’ve managed to accrue over my formative years. The last six years of the Narendra Modi government at the Centre has made me question several aspects of the present Indian reality. As a student, I would like to voice some of my opinions and concerns.

Over the last two years, the raising of the collective voice against the Citizenship (Amendment) Act and the violence at Jamia drew immense support. We’ve also seen the State machinery’s crackdown against student voices in the crudest ways possible — it’s been over six months since Umar Khalid found himself behind bars. I don’t expect the history books to hold these incidents 20 years from now.

The assembly election in West Bengal is expected to go down to the wire but that really isn’t the point. Bengal stands as one of the states to have prevented the BJP from winning power — but at what cost? Under the garb of progressiveness, Bengal’s student community has suffered the scourges of corruption, repression and thuggery. Privilege and apathy have prevented people here from acknowledging these problems and acting upon them.

A study recently stated that India is now an elected autocracy. The Bharatiya Janata Party is offering Bengal ‘Ashol Poriborton’. On the other hand, only ‘Khela hobe’ seems to define the manifesto for the Trinamul Congress.

We need to identify the lesser evil.

But the lesser-evil leitmotif needs to be examined when it challenges the basic idea of the Constitution and of India as a nation. At a time when hypocrisy and centrism seek to govern middle-class sentiments, the lesser evil rhetoric can do nothing but enable repression and discrimination. The police brutality meted out to the student community and the oppressive State machinery that has  tried to gag the youth have been met with defiance. Defiance of State-sponsored oppression has always been the clarion call for change. This is what would make me speak, think and probe before casting my vote in the days to come.

Is it fascism versus corruption this election season in Bengal then?

This question has been rendered redundant for a large cross-section of the population. None of the contestants in Bengal’s electoral fray has been able to solve the challenges that confront education. The Central government has been in a relentless pursuit to demonize knowledge, alter syllabi, reduce research grants, cut educational expenditure and introduce ‘cow science’ into the curriculum. We have seen students being assaulted and incarcerated. The need of the hour is to educate and mobilize the people. The emancipation of communities cannot be achieved with the help of flimsy pamphlets.

The student-voter identifies with the trends of the time and does not cower to point an accusing finger. The Left alliance has fielded young, dynamic candidates, citizens whom other students can look up to. The seduction of the powers that be cannot be challenged unless there are dynamic young agents who are ready to face the heat of the battle.

When it comes to a choice between fascism and corruption, the student-voter does not have himself cocooned in nostalgia. He/she chooses to think and act in a dynamic manner —  walking into the booth to exercise a right not to choose a lesser evil but to take a stand. Binaries don’t bother the student-voter: the sight of students, minorities and the working class being subjugated and exploited does.

I wish to make good use of the spine when it comes to casting my vote.