Corridors connecting forest or reserve areas are where most wildlife accidents occur. Moumita Chaudhuri reports that efforts are on to prevent roadkill 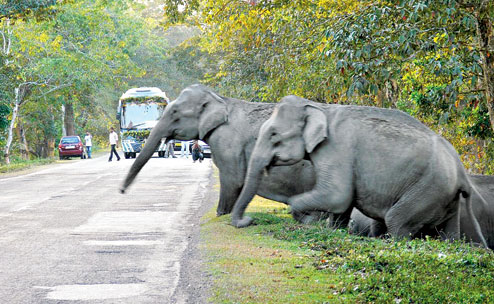 India has a set of laws in place for the protection of its wildlife. Yet rarely does a month go by without the loss of life being reported from some part of the country. And they are not always deaths from poaching.

Trains fatally injuring elephants are regularly in the news. But deaths of spotted deer, civets, black-naped hares, Russell’s vipers, and many such animals go unreported. Vehicular movement through the corridors that these animals use to move from one protected area to another in search of food and water is the culprit.

But there is hope. The National Wildlife Action Plan III (2017-2031) — unveiled by the environment ministry earlier this year and to be adopted from 2017 — has, for the first time, addressed the issue of corridors. It talks about the need to secure “wildlife corridors and also draw appropriate plans for their management”.

It also talks of identifying the “important wildlife habitats, corridors and sacred groves situated outside the administrative control of the state forest departments (SFDs) in collaboration with suitable NGOs and scientific institutes and get them notified as community reserves under Section 36C of the Wildlife Protection Act, 1972, or biodiversity heritage sites under Section 37 of the Biological Diversity Act, 2002.”

Wildlife enthusiasts hope for change. “It would be best if we could declare the corridors sanctuaries or national parks. But that would definitely not happen. So, at least, they should be declared eco-sensitive zones (as per the Environment Protection Act, 1986),” says M.K. Ranjit Sinh, who had spearheaded the Wildlife Protection Act, 1972.

Divya Vasudev, senior scientific consultant, Wildlife Conservation Society, India Program, or the WCS India, points out that corridors raise conservation issues outside of a prime wildlife habitat. “In this sense, we cannot think of conserving corridors, or connectivity, the same way that we do for protected areas,” she says.

But efforts are on to deal with problems that the corridors pose. Some states have taken steps to prevent deaths. An 18km railway track between Kansrao and Motichur that runs through the Rajaji National Park in Uttarakhand was declared
a special caution zone years ago. The trains have been asked to reduce their speed when passing through this corridor and throwing food from the windows by passengers has been prohibited. A special team keeps watch on elephants’ movements and keeps stationmasters informed.

In Odisha, the movement of goods trains between Jakhapura and Banspani passing through Keonjhar district is stopped between 5pm and 5am — when lack of visibility poses a threat to animals crossing the region. Continuous hooting has been ordered in sensitive zones (identified by the SFD) and trains have been provided with powerful beams to help in spotting animals. The SFD has also organised training programmes for engine drivers and cabin men to sensitise them on the issue.

At the Kaziranga National Park, Assam, the National Green Tribunal (NGT) has put in place a sensor to detect the movement of animals. Checkposts have been set up to stop traffic when the animals cross.

However, Vasudev observes, “Connectivity conservation would be managed better if we step out of a solely legal approach.” There are participatory ways too to facilitate dispersal, she holds.

Keeping this in mind, the Meghalaya government has taken up community reserve projects. “For any conservation project, we need to involve the local community,” says Yusuf Shullai, wildlife warden, Shillong. Section 36 of the WPA also states that people will have to be involved in such projects. Shullai says that because of this involvement, 41 communities have allowed the government to handle their land to make it congenial for wildlife. In exchange, the people are provided with alternative sustainable living.

The state government has also decided to restore the Nokrek Imangiri forest corridor. “This corridor has two infringements — the Meghalaya Police Battalion camp and the North East Hill University. We have asked them to move. However, they are asking for alternatives at very high relocation charges,” rues Shullai.

In addition to this, WCS India, Nagaland Wildlife and Biodiversity Conservation Trust and WCS Myanmar have, in collaboration, initiated a long-term vision of reconnecting tiger and other wildlife populations in the Indo-Myanmar border region. For this, too, connectivity with source populations in the Northeast is crucial.

“Such large-scale wildlife movement is impossible without the support of people living in this region. Our focus is to help animals move while safeguarding the lives and livelihoods of the people. Community-based conservation is the foundation of our project,” says Varun Goswami, senior scientist, WCS India, who is leading these efforts.

There are scores of problems, too. There is concern over a Maharashtra High Court order allowing the expansion of the two-lane National Highway No. 7 to four lanes. The NGT has raised objections.

“I agree that developing highways is important, but with a little bit of planning, we can ensure that these highways have minimal impact on wildlife,” Vasudev says. She adds that where forests, even if degraded, facilitate connectivity between protected areas, deforestation should be avoided. And if possible, the forests should to be restored.

R. Mohammed Saleem, founder, Environment Conservation Group, an NGO, offers an alternative. “We can build wildlife corridors in the form of overpass, underpass or canopy bridge along linear structures such as roads, canals or railway tracks to help wildlife cross from one protected patch to another,” he says.

The Anamalai tiger reserve at Puduthottam, Tamil Nadu, has an artificial bridge, made of worn out fire-fighting hose pipes, for lion-tailed macaques to cross the road. “This has helped a lot,” Saleem points out.

But animals may not necessarily move through such demarcated corridors. “From my previous work on the hoolock gibbon, for instance, we know that plantations do not serve as habitats for the gibbon, but they can move through plantations. This movement also needs to be facilitated, and there needs to be a multi-pronged approach for maintaining this connectivity,” Vasudev emphasises.

Supreme Court environmental lawyer M.C. Mehta agrees that restoring corridors is a must, but points out that it is essential to ensure that the ecological balance of a habitat is not disturbed in the name of development. “The state of the Rajaji National Park is woeful. There is almost no water left in the park and the summer is the worst time for these animals which get killed when they cross the roads in search of water,” he says. Clearing forests to build concrete jungles is not permissible, he stresses.