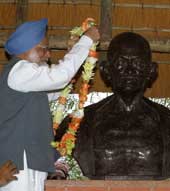 The year was 1923, the month was November. Mohammad Ali Jinnah was a candidate in Bombay for membership to the Legislative Assembly. One afternoon, during the election campaign, as Jinnah and M.C. Chagla were going out for lunch, Mrs Ruttie Jinnah drove up to the Town Hall in Jinnah?s limousine and came up the steps with a tiffin basket in her hand. She said, ?J [that is how she called him] guess what I have brought you for lunch? I have brought you some lovely ham sandwiches.?? Utterly startled, Jinnah exclaimed: ?My God! What have you done? Do you want me to lose my election? Do you realize I am standing from a Muslim separate electorate seat, and if my voters were to learn that I am going to eat ham sandwiches for lunch, do you think I have a ghost of a chance of being elected??? A downcast Mrs Jinnah retreated quickly, tiffin basket and all. But Jinnah and Chagla went on to have lunch at Cornaglia?s, a well-known Bombay restaurant, where Jinnah ordered a plate of pastry, a plate of pork sausages and coffee.

The incident is revealing in many ways. It speaks volumes about the Westernized lifestyle of the Jinnahs. Witness the nickname J, the penchant to have sandwiches for lunch, the choice of restaurant and the food ordered there. It was the lifestyle of a Westernized oriental gentleman closely paralleled by life in the Nehru household where only English was spoken among the siblings who referred to each other with nicknames like Nan and Jo.

Jinnah?s Westernization was evident in other ways as well. He was born Mohammad Ali Jinnahbhai. He refashioned this to M.A. Jinnah in London. He gave up his traditional Sindhi long yellow coat for Saville Row suits of which he had about 200. He never wore a silk tie twice and his shoes were two-tone leather or suede. His manners were perfect and he prided himself on the fact that he was a frequent guest in some of England?s stately homes and palaces.

His Westernized sensibilities could not have encouraged Islamist tendencies. Yet Jinnah has come to be known as the quintessential Muslim politician who roused Muslim religious sentiments to win for himself the state of Pakistan. Yet this is not how he began his political career. His early heroes were Dadabhai Naoroji and Pherozeshah Mehta. Even as late as 1925, Jinnah retained the political attributes that harked back to the early Congress. He remained committed to secular reform and national independence. When the young Raja of Mahmudabad spoke of himself as a ?Muslim first??, Jinnah chided him: ?My boy, no, you are an Indian first and then a Muslim.?? Jinnah began on the fringes of Muslim politics but he marked out for himself a space in Indian politics by becoming the sole spokesman of Muslims in India and also by making himself the champion of the two-nation theory.

Jinnah saw himself as a political Muslim. He used his Muslim identity to speak for the interests and aspirations of Muslims in India who, he believed, were not being adequately represented in the Congress and by the Congress. In Jinnah?s view, in an independent India dominated by the Congress, the Muslims would never get a fair deal. The Muslims, therefore, needed their own nation. The Muslims in India were more than a religious group, they were a nation within a nation. The making of Pakistan would be the recognition of the two nations within India.

Jinnah succeeded in achieving this goal. He was helped by British policies of divide and rule and the creation of separate electorate constituencies. Jinnah played up the separate interests and aspirations of Muslims and thus created the basis of communal politics. He believed that politics could be focused around religious blocs. He was a Westernized and secular man who contributed to the making of communal politics in India.

But this contradiction made Jinnah somewhat unique among communal politicians. He was no zealot. He simulated fanaticism and cynically manipulated Muslim religious feelings. He was a hard-headed realist who knew what he had to do if he wanted to attain his goal of Pakistan.

The change in Jinnah?s political profile entailed changes in his appearance and lifestyle. He took to wearing the sherwani and karkul cap which came to acquire his name. He began speaking more in Urdu, albeit a very anglicized version of it. His contempt for the ulema became tempered and subdued. Jinnah accepted and adopted the Islamic idiom. His politics, or rather the goal of his politics, demanded this. But this did not mean for Jinnah a complete surrender to Muslim orthodoxy. He paid no heed to those who wanted the Muslim League to be committed to a Pakistan based on Quranic principles. He resisted demands to oust the Ahmadis from the Muslim community. The wog did not become a maulavi.

The Pakistan that Jinnah got was not exactly what he had wanted. He complained to Lord Mountbatten that he had been given a ?moth-eaten Pakistan??. Neither was Pakistan an Islamic theocratic state that many orthodox Muslims had envisioned. Jinnah spoke of his vision of Pakistan in his address to the Pakistan Constituent Assembly on August 11, 1947.

He spoke first of the ?cyclonic revolution?? which had created two independent sovereign dominions. Then he told the people of Pakistan, ?You are free; you are free to go to your temples, your are free to go to your mosques or to any other place of worship in this State of Pakistan. You may belong to any religion or caste or creed ? that has nothing to do with the business of the State. We are starting in the days when there is no discrimination, no distinction between one community and another, no discrimination between one caste or creed and another. We are starting with this fundamental principle that we are all citizens and equal citizens of one State?I think we should keep in front of us our ideal and you will find that in course of time Hindus would cease to be Hindus and Muslims would cease to be Muslims, not in the religious sense, because that is the personal faith of each individual, but in the political sense as citizens of the State.??

The maker of communal politics had thus returned to the first principles of secularism. Did he know in August 1947 that he was dying and had thus returned to his original values, brushing aside in one grand sweep the means that he had adopted to reach the goal of Pakistan? He was amoral. The gaol mattered. He sought to create a secular state through communal politics.