Advertisement
Home / Opinion / Digest this: without milk and meat

Digest this: without milk and meat 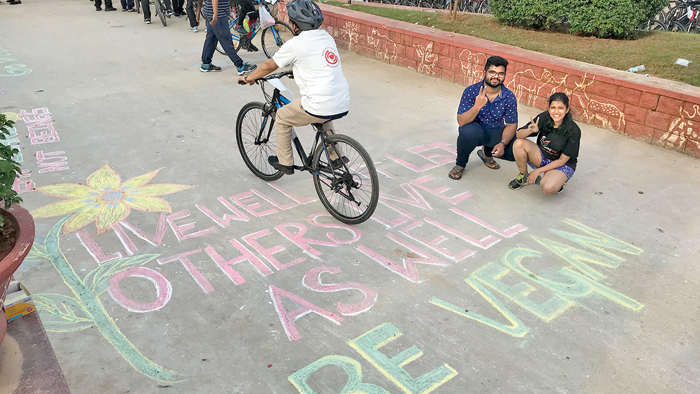 Chalktivism efforts in Hyderabad, where chalk art is used to convey messages of veganism, on walls and roads.
Telegraph picture
Srimoyee Bagchi   |   Published 22.12.20, 02:22 AM

A family that eats together, stays together. This was my grandfather’s favourite maxim. But mealtimes can be tense affairs in joint families. The latest cause of unrest in mine is my sister’s decision to go vegan. Each course is punctuated by arguments for and against her choice to shun milk and meat. My sister belongs to a growing community of people who believe that they have chosen a lifestyle that is pro-environment. The United Nations’ Food and Agriculture Organization estimates that the livestock industry generates nearly one-fifth of human-made greenhouse gas emissions. Yet piety isn’t synonymous with veganism; vegans seem to share problematic traits of food shaming and evangelism, the markers of India’s vigilante groups.

This militant strain in Indian veganism may have been passed on from the West. The resultant myopia has led to the cult of vegans ignoring local context that must be factored into debates on meat production practices, consumption and, most fundamentally, personal choice. When shrill vegans speak of animal cruelty, the image that they usually have in mind is that of industrialized meat production that often takes place under stressful conditions in countries where per capita consumption of meat is higher than that of India. But context, as they say, is the key. The kochi pantha that floats in a bowl of caramelized gravy of the Sunday lunch has probably grazed on the savannah grasslands of Rajasthan — home to 21.5 million goats, about 14 per cent of India’s total goat population. Livestock farming need not be in conflict with local ecology: Rajasthan’s cattleheads are integral to the survival of the endangered Indian grey wolf. In Rajasthan, people are turning increasingly to animal husbandry in the face of reversals in agriculture. This interconnectedness among landscapes, species, communities, production and food often remains elusive to the raging vegans’ sensibilities.

The vegan may respond by waving the ‘ethical’ avocado. Grown in large quantities in Mexico and Chile, where industrialized production of this plant has wiped out indigenous species and damaged biodiversity, this ‘conscientious’ fruit has travelled great distances to grace the vegan plate. Given the energy-intensive, temperature-controlled storage and shipping, not to mention the waste generated from packaging, a locally-made keema pav is likely to have a lighter carbon footprint than the avo-toast.

What must also be kept in mind is that the primary drivers of climate change and the resultant disintegration of natural systems are economies that worship ‘infinite growth’, a system where exploitation of resources is proportional to economic growth. Do dear vegans know that producers of soya and almond milk — delicacies in the meat-hating universe — are complicit in this kind of avarice? Unilever, one of the biggest consumer goods firms in the United Kingdom, wants to increase its annual sales of plant-based meat and dairy products five-fold within the next seven years. It has its eye on pocketing an estimated one billion euros by 2027 — but not on the deep carbon footprints of almond and soya milk that are popular products in Unilever’s vegan ice creams. Over 80 per cent of the world’s almonds are grown in California, which has battled severe drought for most of this decade. Yet 6,098 litres of water are being poured to produce just a litre of almond milk. Another vegan favourite, soya, is a serious history-sheeter. Over the past two decades, 300 million hectares of tropical forests have been felled globally to sustain soya cultivation.

The politics of food is already a fraught one in India: what one eats can spell the difference between life and death quite literally. The line separating religious bigotry against meat-eaters and the ‘ethical’ vilification of consumers of animal products seems to be blurring.

Making personal lifestyle choices to reduce one’s carbon footprint is laudable. But to do so with unshakeable faith in the moral superiority of that choice is unwarranted. The consumption of meat and vegan products raise difficult questions that need to be addressed.